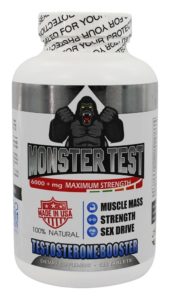 If you’re not a monster, turn around now, man.

Because Monster Test is only for monstrous men.

Just like LSD is for hardcore psychedelics and moonshine is for genetically established rednecks, Monster Test is a T-booster designed exclusively for the heavyweight carrying, heavyweight pushing heavyweight who can take a shot or two of the heavy stuff without going down right away.

Joking aside, this T-booster might actually be too heavy for most (if not all) men.

Absolutely nothing—the mineral is actually situated highly on our BIG LIST of T-Boosters—but Monster Test has waaay too much. And normally this isn’t a big deal, but ingesting upwards of 100 mg Zinc daily over time has been linked with prostate issues. 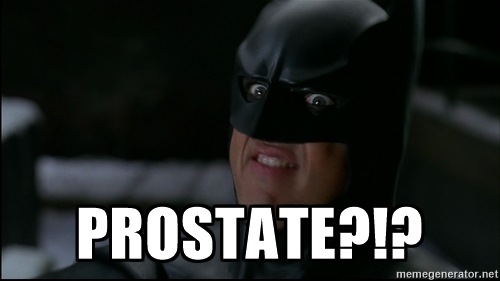 Normal dosages range around 15 – 25 mg daily, so this is sort of frustrating that an otherwise very impressive formula risks serious side effects by overloading one of its minerals (and supplying it in its riskiest form: Zinc Sulfate).

Other than that, the vitamins & minerals are looking solid—completing the ZMA picture with heavy doses of Magnesium & Vitamin B6. Plus another B5 favorite Vitamin D (although its dosage is too low).

But let’s see where the real T-boosts are coming from:

First things first: Yes, this blend has the T-boosts.

The highest ordered ingredients are:

These ingredients show decent potential for male health, but they’re sort of an unorthodox trio (with exception to Tribulus). We’re not sure how much power Triphala & Garlic supplementation will have on male sexual health, but they seem like positives to us.

The only ingredients we outright don’t like are Chrysin (doesn’t work), Indole-3-Carbinol (questionable effect on sex hormones), & Bulbine Natalensis (risk of liver damage). But these are massively outweighed by ingredients that we do like.

Because Monster Test truly is a monster T-booster. There’s a lot to unpack with this long-listed, heavily-dosed formula. And most of it is actually good—although, we do need to touch upon that whole Zinc thing again.

In total, the T-boosters that we’re looking at here include:

Triphala & Garlic aren’t included on that list, because, although they have promising research, we’ll need more centered on male health before giving them a full pass here. Otherwise, we’re seeing such a massive number of T-boosters (4 of which are on our Top 5 List), that even if some of them aren’t dosed high enough, odds are that some of them will still have an effect on T.

Normally, we’d dock points for having too many ingredients, but Monster Test’s monster dosages give us confidence in their formula. Although, we’d prefer for them to remove the questionables: Chrysin, Indole-3-Carbinol, Bulbine Natalensis…

However, speaking of monster dosages, that Zinc… it’s a lot. Way, way a lot—especially if the directions call for two servings a day (50 mg x 2 daily). That’s definitely in the danger zone of Zinc supplementation. We’d hate to call that a deal-breaker, considering the huge list of qualified T-boosts… but it might be.

At the least, this isn’t a T-booster for the little guys. This is a monster booster for monster men. So make sure you’re already packing enough man meat to handle the extra milligrams of Zinc (and even then take extreme caution with any additional Zinc intake).

Aside from increasing testosterone, Monster Test claims to work as a “6-in-1” T-booster, purporting these 6 benefits:

Aside from “joints” & “pump”, these benefits can be accomplished by simply increasing your T levels—however, Monster Test does provide additional joint- & pump-supporting ingredients, making it a prime booster for BIG, MONSTROUS men.

BIG, MONSTROUS MEN. As in your Brock Lesnar or Jon Jones-type of men. Not that men of lighter stature are any less monstrous than heavier doods (SEE: Conor McGregor), but you’ll want the weight handle the milligrams in this product.

We mentioned the big risk at least a few times now: Zinc’s association with prostate issues. Other than that we can’t imagine there being too much to cause worry. Mild side effects may include:

Take note that there are no reports of complaints with regards to Monster Test, but there are a decent number of positive reviews.

We warned you before and we’ll warn you again: Too much Zinc is RISKY. So, if you want to run that risk after reading this review, that’s on you. Otherwise, there are plenty of solid T-boosters and performance-enhancers in this blend. So many that we only recommend this to monster-sized men.

Due to some confusion over the directions of Monster Test, we are posting where we got our information from. Specifically, this label: 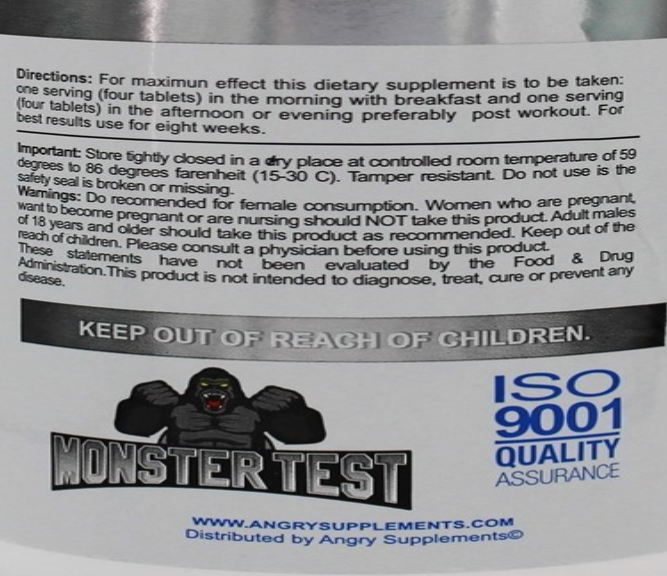 When we looked closer at the Monster Test label to confirm its directions, we noted some pretty bad typos, which are highlighted here:

These label errors we discovered on second review are so careless that we ended up deducting a full star from our Monster Test review. Because if they are that careless and sloppy in their directions, we have serious doubts about the quality of the supplement itself.