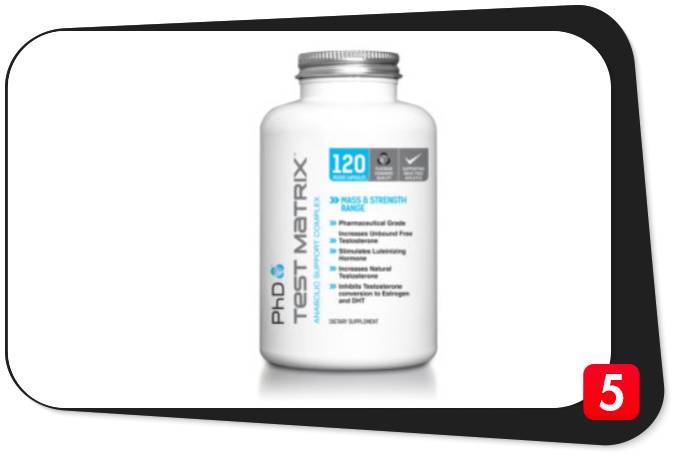 And guess what this one does:

Eventually these manufacturers will need to come up with a different word—there are only so many variations of “Test” that you can do. What’s wrong with: Ball Matrix or Ball Booster or, hell, we’d even accept Testicle Fury for at least having the balls to include the “icle.”

Of all the “Test” products, let’s see how (if) this one stands out.

Manufactured by PhD (how’s that for “bold”), Test Matrix is a T-booster that sells itself primarily as an “Anabolic Support Complex.” In other words, this isn’t your little bitch boy supplement, nor is it necessarily a grown man health product… It’s strictly for BIG muscles and dirty, rumpus, late-night FUN. Formula notes: 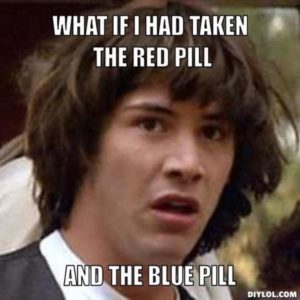 Luckily, we’ll never have to find out thanks to Test Matrix’s third option:

Alright, how do we put this.

Tribulus Terrestris is an awesome, incredibly popular T-booster… But it’s not really a quote-unquote “T-booster.” As in, it doesn’t really boost testosterone—at least not for most men.

What the hell’s the deal then?

That’s a good question: There are studies that support Tribulus’ use as a T-booster, but they almost unanimously focus on elderly men with low T levels. Younger “healthy males” don’t really benefit from herbs like Terrestris (namely because younger “healthy males” are already in their T prime).

However, all men can benefit from Tribulus due to its massive spikes on libido & muscle gains—especially with this hefty 1000 mg, standardized extract.

Tribulus spikes libido, but not T.

And Test Matrix goes with two high-potent extracts—one of them exclusively branded as Fenosterone™. This is impressive: Fenugreek works as one of those “multi-tasker” T-boosters—it increases (free) T, boosts recovery, enhances sex—and you can bet your sweet ass that all of these effects will be covered by these two standardized extracts and high 820 mg dosage.

However, there’s a chance that Fenugreek does too much for T:

One of its primary effects is inhibiting the conversion of T to DHT… Which technically leads to more active T, but does so at the cost of reduced DHT—which is a manlier hormone than T.

You sure y’all want that, BRO.

Well, whether you want it or not, you’re getting it, esé:

Because this matrix has even more DHT blockers:

Bulbine Natalensis research, on the other hand, shows significant anabolic, T-boosting activity—however, we recommend AVOIDING this T-booster as it may cause liver damage. Whether it also reduces DHT or not remains unknown.

Estrogen blockers, baby. That’s what these are (theoretically speaking).

We’re happy to see Resveratrol prioritized first here as it’s backed by the most promising research—plus, it’s a healthy antioxidant that promotes cardio health, as well.

Chrysin & Hesperiden, however, are questionable—namely because the former needs to be directly injected into the testicles to have any effect (F*CK THAT!), and the latter just doesn’t seem to do much for T (or Estrogen, for that matter).

The one-and-only ZMA: Zinc, Magnesium, and Vitamin B6.

Will ZMA give you BIG, beefy muscles??

*But only under conditions of low Zinc and/or low Magnesium. Bros with enough initial ZMA levels won’t necessarily benefit from supplementing it—but, who are we kidding… In our McWorld of fries and pizza, it’s very likely that your ZMA levels are low. That’s why all the athletic T-boosters have it. 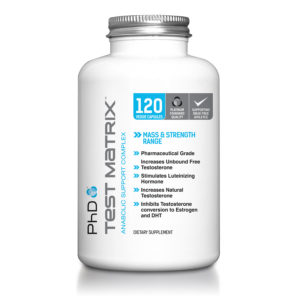 Test Matrix is a massive formula that takes various back-door routes towards T-boosting:

Yet, the one path that Test Matrix neglects is the most straightforward one:

T-boosters that directly increase the body’s “natural production of testosterone” (as so many manufacturers like to put it) are largely missing here. Best5 favorites that work directly on the testes (ex. DAA), increase LH secretion* (ex. Mucuna Pruriens), etc. etc. can go a long way in terms of restoring T levels. (*Some research claims Tribulus increases LH secretion, but apparently not to any significant effect).

Yet, there’s still plenty of value in this high-potent, high-quality, no-holds-barred formula that makes both legitimate (Fenugreek, ZMA) and risky (Bulbine, DHT-blockers) moves at maximizing the bioavailability of the T currently in your body.

Overall, Test Matrix seems more intent on re-routing current T levels towards building muscle than simply boosting overall T levels. As such, we qualify this T-booster as a “For the BIG Bros” booster, rather than a true, genuine, clinically-established, ball-inflating T-booster. 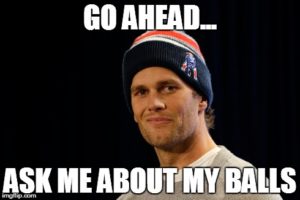 Put on your reading glasses, bro. Test Matrix claims a lot of benefits:

In a nutshell, Test Matrix’s benefits include: Increased active T levels. Because these bulletin points illustrate the effects of healthy testosterone.

Considering that many of the ingredients support anabolic muscle gains over actual T-boosts, the benefits of this particular T-booster are more geared towards, well… keep reading:

BIG Ass Bros (what’s an “ass bro”??). At one point or another, time and time again, bodybuilders are going to a hit a hormonal, muscle-depleting WALL. And many times this WALL comes from over-exercise. Test Matrix seems specially designed for over-exhausted BIG men to overcome this WALL when they feel their training has begun to negatively impact their gains.

None reported. But we definitely recommend sticking to the proper dosaging and directions:

You don’t want to totally funk up your DHT levels and your liver, do you?

Maybe you do—who the hell are we to say??

Would it be irresponsible of us to make a gambling analogy about taking a risk for the BIG money in comparison to trying risky ingredients for BIG gains? Probably. But that’s the dilemma we’re facing here. Shit like Bulbine and DHT-Blockers are risky—especially at this volume. However, you’re a big boy. If you’re coo with it, then we’re coo with it. Test Matrix is your bona fide (albeit risky) muscle enhancer (with some solid T-boosts on the side).