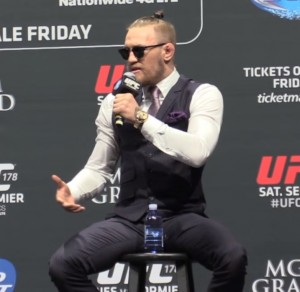 Conor “The Notorious” McGregor is never short on words.

And there are no limits on who he’ll verbally victimize—from Mayweather to Cerrone, P. Diddy to Jesus, it seems no one is safe from McGregor’s foul mouthed ravings.

No one except perhaps Nate Diaz.

While McGregor is still the reigning featherweight champ and sitting on a successful 19-3 record, his recent loss to Diaz in UFC 196 currently makes the Irishman look like the punch-line to his many jokes.

So in good faith towards Notorious, here are 8 of his best victimizing trash talks to prepare us for his inevitable comeback in the octagon.

“I don’t look at a man who’s expert in one area as a specialist. I look at him as a rookie in ten other areas. If you can box, what happens if I grab hold of your legs? If you put me face-to-face with Floyd Mayweather—pound-for-pound boxing’s best—if I fought Floyd, I would kill him in less than thirty seconds.”

In an interview with Esquire, prior to defeating Jose Aldo for the UFC’s featherweight belt, McGregor discussed his disdain towards being viewed as one thing: A puncher.

He praised the MMA as a superior sport to boxing, namely taking a jab at Floyd Mayweather as he’s been wont to do since Mayweather partially credited McGregor & Rousey’s success to racism. 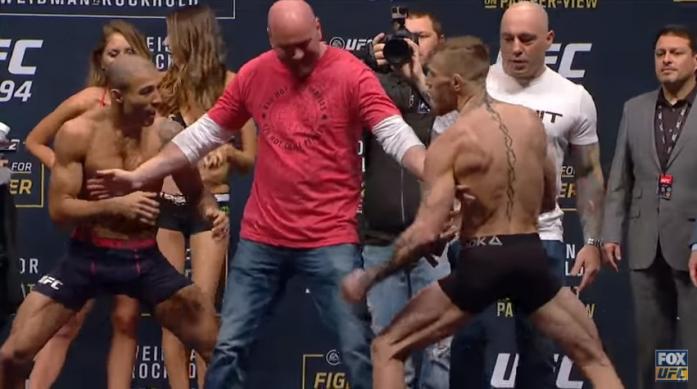 “I don’t want to scare him anymore. He’s petrified. He went running before, so now I’m going to take the opposite approach: Cuddle him, look after him, whisper sweet nothings, tell him it’s gonna be alright, it’ll be over quick. And hopefully get him in that octagon December 12th and then end his career.”

Initially, Brazilian fighter Aldo bowed out of battling McGregor due to a rib injury… which might have been a mistake considering how much shit Conor gave him during their later pre-fight conference.

“There’s not a man alive that can beat me, but Jesus ain’t alive, is he? So I don’t fucking know, maybe he can come back from the dead. I don’t know. Ehm… I’d still whoop his ass.”

Leave it to TMZ to ask all of the “important” questions (their follow-up to the Jesus question: “Do you hope Justin Bieber and Selena Gomez would get back together.”).

Apparently, McGregor fears neither the wrath of God nor the Second Coming of Jesus. If the Irishman wipes out every division of the UFC as he seems to be planning, then perhaps a one-on-one with the J.C. Man is the next logical step?

Either way, there must be a special layer in hell for Irish MMA fighters.

“My thoughts on Dennis Siver is he’s a midget, German, steroid head.”

Prior to UFC 178, Conor McGregor vs. Dustin Poirier, McGregor spoke against fighter Dennis Siver, who Conor would go on to defeat in UFC 196. Not the most elegant statement, but Notorious got his point across early, delivering the MMA-equivalent of “he’s a stinky, doo-doo, dumb brain.” 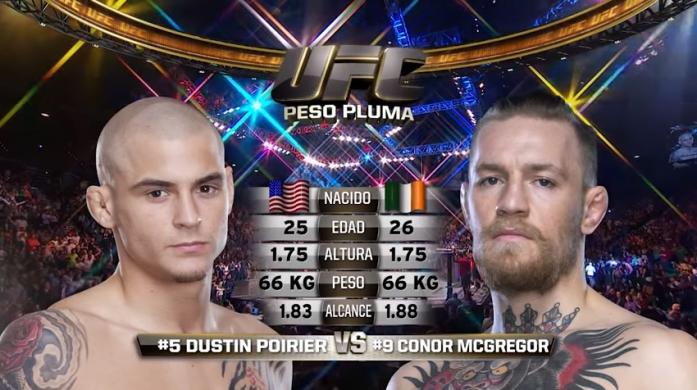 “He’s a quiet, little hillbilly from the back-ass of nowhere. I’ve nothing against the guy. I’m sure he grew up in a circus or a farm. He’s a nice little kid. His cousin is probably named Cletus or something.”

After verbally attacking Siver, McGregor turned his attention to his upcoming opponent Dustin Poirier. Admittedly, this is perhaps one of Conor’s “nicer” trash talks in a punk-backwards sort of way… For the record: Poirier lasted a full 1:46 into Round 1 before McGregor defeated him via TKO. 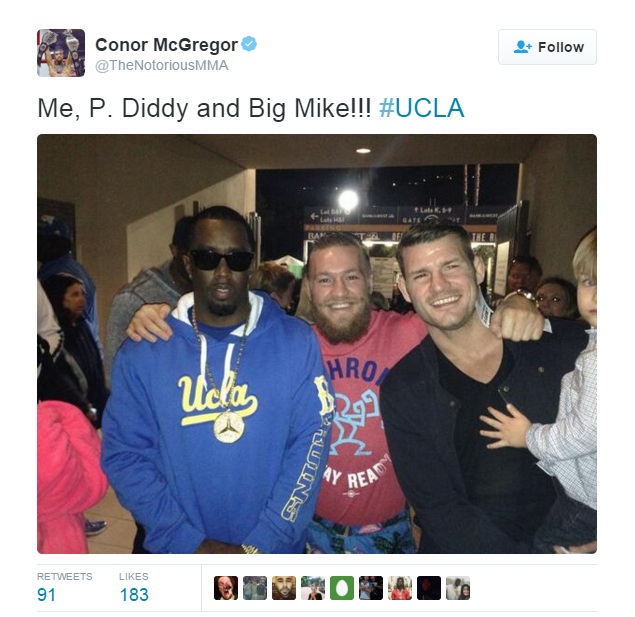 “P. Diddy is a little bit up his own ass to be honest.”

According to McGregor, he was watching a UCLA football game when he met and took a picture with P. Diddy. Clearly unimpressed with Diddy’s self-important demeanor, Conor laughed in telling, “P. Diddy was on the bottom of the list of people I wanted to meet, especially after finally meeting him.”

“You’re too slow and too stiff. You’re stiff as a board. I’d snap you in half. I see stiffness when I look in that 155 pound division. Slow, stiff. I feel like they’re stuck in the mud almost. The featherweights they hit like flyweights, so it’s nice down there just destroying them and killing that whole division, but I have my eye on that 155 division and I see them all stuck in the mud in there.”

Although he never fought McGregor, Cerrone had an opinion on his desire to jump into the 155 division—essentially telling the Irishman he’d get his ass kicked. If McGregor was at all perturbed by this, he didn’t show it, instead ranting on about how the division is, well… you read it: “Stuck in the mud.”

Moments after he turned slightly towards his left to Chad Mendes, who McGregor did fight (and KO), to state: “You hit the deck like a bitch.”

Moral of story: Stay out of McGregor’s radius while he’s on a rant. 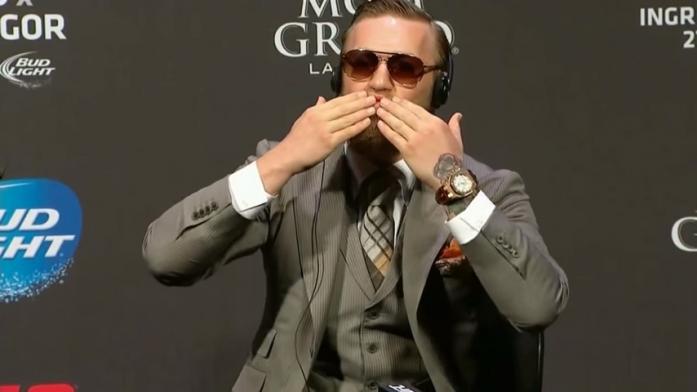 “Just last week I was collecting social welfare, you know what I mean? I was there saying to them, ‘I don’t know what’s going to happen. I’m signed to the UFC. I don’t know. Blah, blah, blah.’ Now I suppose I’m just going to have to tell them fuck off.”

Whoever “them” are, McGregor is telling them to “fuck off” now that he’s on the riches end of his legendary rags-to-riches tale—which has seen the fighter transition from a 180-Euros-per-week welfare recipient to an internationally known athlete worth upwards of $10 million.

And that’s only a small percentage of his overall plan:

“Nobody in the game has talked nine figures. That’s $100 million plus. That’s my contract, so, that’s where I’m at and I’ve done it the way I’ve done it. Either learn from it or don’t.” 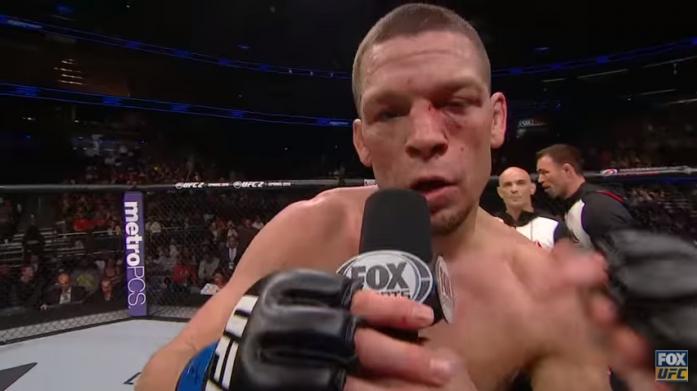 Ultimately, the biggest victim of McGregor’s shit talk is himself after his shocking upset loss to Nate Diaz.

Spoken by Diaz, his quote immediately followed his win over McGregor, which he purportedly anticipated: “I knew I was going to start slow and pick up as I go. My plan was to not use anything in the first round and pick up.” Which is exactly what occurred at UFC 196. 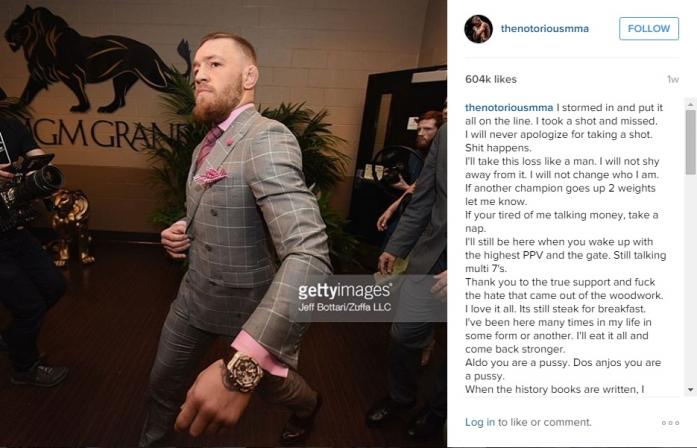 “I stormed in and put it all on the line. I took a shot and missed. I will never apologize for taking a shot. Shit happens. I’ll take this loss like a man. I will not shy away from it. I will not change who I am. If another champion goes up 2 weights let me know.”

But perhaps more shocking than McGregor’s Round 2 defeat by submission was the borderline-whispering level of humility & maturity that he expressed in his post-fight interviews.

If his trash talk comes from a burning Irish temper, then he sure as hell knows how to rein it in. And in the end, Conor jumped up two weight divisions to fight Diaz, showcasing action to his committed goal of multi-division championships.

If anything he seems even more committed to this goal now, exuding a “lesson-learned” attitude following his bout with Diaz.

With that in mind, we feel it’s safe to say that the best of Conor McGregor’s trash talk is yet to come.