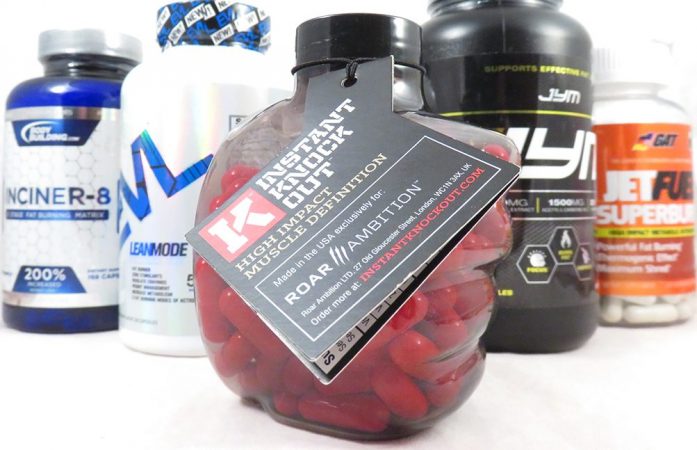 The champ is here! Instant Knockout has once again earned the title of Best Fat Burner which means this little guy here is our first ever back-to-back #1 supplement.

There is really not much to explain, it has topnotch fat burning ingredients such as green tea extract, green coffee extract, cayenne, and caffeine and nicely topped by a bit of black pepper extract for maximum absorption. Talk about an intense fat burning, flab punching session. 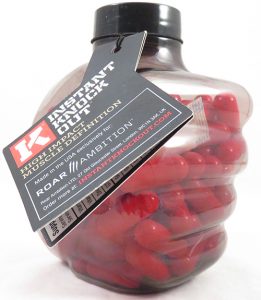 More than a hard-hitting combination of fat burners, it also makes use of glucomannan for more control over our hunger pangs while also balancing blood sugar at the same time. REALLY helpful since low-blood sugar triggers hunger. Combine this with the fat burning blend above and you got yourself a flurry of punches and before you know it, fat falls to the mat from an instant knockout.

And what it makes it really standout is its bottle. Like seriously, props to the marketing team for this one and may they continue to dish out cool bottle designs worthy of a selfie.

Formulation. It’s one of the most old-school fat burners out there but an evidence-backed formula obliterates any fancy schmancy combination with barely any studies at all.

Fighters. Formula mix + punchy bottle design = a bring it on kind of attitude towards fat burning. MMA fans will love this, as will anyone who is drawn to a gritty, no-frills fat burner that does exactly what it’s supposed to do, without any fanfare.

It’s not everyday you get to see a potent fat blaster minus a stimulant but LeanMode wants to be an exception to that rule.

LeanMode made it to our list – and almost clinched #1! – because of its originality and function, two words most fat burners do not possess. It’s got no more than five ingredients and three of them are standardized to maximum potency! Yeah, bruh. This fat burner will get you hyped without stim inside. 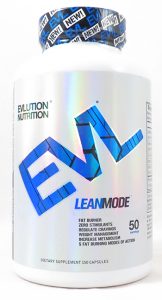 We’re talking about standardized garcinia, green coffee extract, and green tea extract. These three are already potent in their generic forms so we can only marvel at their potential as standardized ingredients. Good job, Evlution Nutrition.

But this fat burner is more than just potent ingredients.

It’s got Acetyl-L-Carnitine aka ALCAR which helps speed up fat burning from the very cells of your body which also creates more energy for your body as a whole. Combine that with CLA, an ingredient known to be an all-around weight loss component in supplements, and you got yourself the kind of synergy that will not just burn fat but also give you the kind of high that’s clean and won’t get you crashed.

Synergy instead of stims. With this kind of formula, stim will just get in the way. Instead, Leanmode leverages the power of several fat-burners that just seem to work well together.

Shredders who keep it simple. Leanmode offers a clean, simple formula with 5 ingredients only, all at good doses. This is appealing to those who are sick and tired of formulas that include a million (low-dose) fat-burner ingredients and a million unnecessary additives.

When it comes to fat burners that heats things up, you can’t forget about Shred JYM. The formula used in this fat burner’s got fat incinerator written all over it.

We got the likes of standardized green tea extract, a good dosage of caffeine, cayenne as Capsimax, and synephrine as Advantra-Z. These four ingredients are known to synergize with one another to create an incredibly hot fat burning stack. 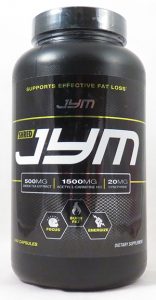 As if those four weren’t enough to make fat cry in pain, it also dumped in 1.5 freaking grams of ALCAR. Shred JYM caps it off with Tyrosine which isn’t a fat burner (nor the nootropic form we wanted) but allows a user to get some cognitive benefits so you also get to boost brain function while you lift.

The result is a kind of fat burner you can depend on when you just need something that puts fat burning as the number one priority.

Intense heat. If you’re looking for a highly thermo thermogenic blend with that extra serving of ALCAR, then look no further.

Intense athletes. Shred JYM is geared towards the lifter who just wants a decent fat burning experience. Nothing more, nothing less.

This offering from Bodybuilding dot com definitely has an inside scoop on getting shredded, sliced and diced.

INCINER-8 uses some of the classic fat-burner ingredients, but places them in a sophisticated formula. Sure it has caffeine, but it doesn’t club you over the head with it — a moderate 100 mg dose. That’ll do. 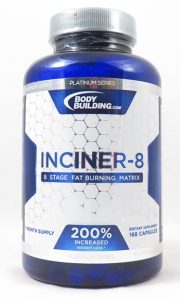 Chromium, cayenne, and L-carnitine are other fat burner staples seen here; plus, INCINER-8 delivers ’em in some premium quality forms.

What sets INCINER-8 apart are a couple of things:

INCINER-8 makes our list because of its skillful fat-burner formulation. We really like its strategy of targeting multiple fat-burning pathways, including hormones, appetite, stimulation, lipolyis, and more.

Equally great are INCINER-8’s use of premium, high-potency ingredients. Although the formula works in many ways, it doesn’t use TOO many ingredients. And, the fat burners it does provide are presented in good dosages and top-shelf forms that may have advantages in research, safety, quality, and ultimately, in fat-incinerating results.

7-Keto® + 5-HTP. Although INCINER-8 lists them for different purposes on the label, both 7-Keto® and 5-HTP target hormonal pathways in order to burn fat. We’ve never seen these two ingredients combined, but it’s a great idea for any weight loss supplement.

Gym rats with overeating tendencies. Training hard works up an appetite. INCINER-8’s core of classic fat burners is customized with support for appetite satisfaction and self control — so you can shred during intense workouts without slipping into a man-beast feeding frenzy afterwards.

GAT is a sports nutrition industry leader and favorite of serious bodybuilders everywhere, so it’s no surprise their Jet Fuel Superburn supplies some industrial-strength fat-burning activity — or as they say, it is a “high impact metabolic intensifier.” 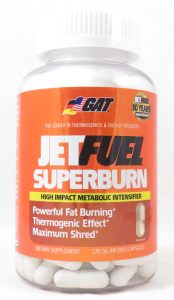 High impact for sure: This formula’s Superburn Stimulant Blend supplies 275 mg of caffeine, 150 mg of standardized bitter orange, standardized yohimbe and cayenne combine into some seriously intense fat-burning stimulation. Meanwhile, Jet Fuel Superburn’s triple-tea blend supplies fat-blasting EGCG along with potent antioxidant activity. Even the BioPerine black pepper extract in this stack adds some fat-burning activity, in addition to boosting absorption of the other ingredients in the formula.

What sets Jet Fuel Superburn apart, though, is its Cognitive Enhancement Blend. The use of L-Theanine and Lemon Balm look to effectively counteract any negative effects of the intense Superburn Stimulant Blend… you know, jitters, rage, kicking puppies, etc. It looks like smart formulation to include some soothing nutrients to take the edge off. But the ashwagandha makes sure you don’t lose your physical performance in the process — a great approach for blasting fat during training.

A fat-loss mindset. While it is nowhere near as good as a dedicated nootropic stack for mental domination, Jet Fuel Superburn’s Cognitive Enhancement Blend helps to level out unpleasant stimulant fat-burning side effects while promoting focus and performance during fat-burning workouts.

Stim-sensitive shredders. Jet Fuel Superburn supplies off-the-charts stimulation in a stack that blasts fat without turning you into an overstimulated psycho. You probably know some bros at the gym who could use a formula just like this.

The trend in this year’s fat burners: Simplicity, synergy and customizations.

Today’s fat-burner consumers are now more concerned over important things such as quality of ingredients, dosage, and how they all work with one another. They may even opt to search out stacks with time-tested fat burning stacks or blends that disregard the use of stimulants. And finally, they want new ways to support their fat loss efforts — such as fighting stress, boosting brainpower, or promoting appetite satisfaction.

As you can see, Instant Knockout retains the #1 slot because of its straight-up design, synergy, customizations, and the fact that anybody can benefit from it — it is great for both newbies and veterans. The formula is a combination of both vintage and new age fat burners and we’re sure to see its fierce bottle in stores for years to come.

But at the end of the day, these are all awesome fat burners, each with its own set of advantages geared towards turning your body to fiery fat furnace this 2017. 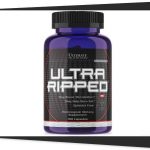 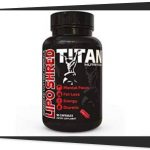 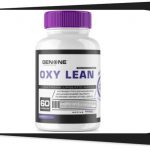 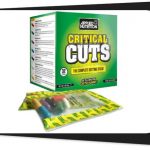