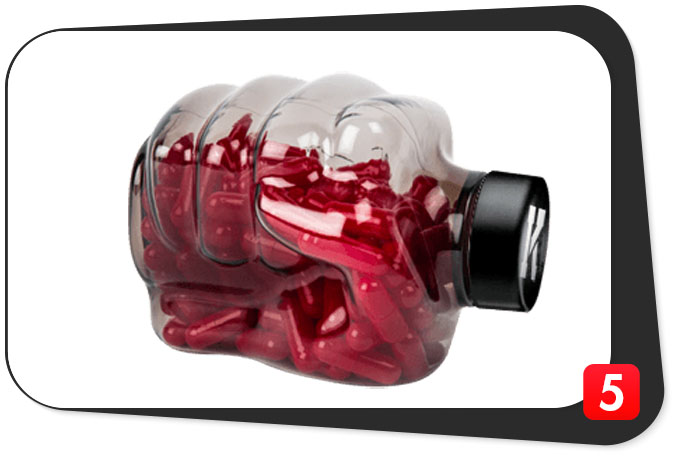 Cutting is complicated for fighters, bodybuilders and athletes. The trap: You diet and train, melting away fat… and promptly get your ass kicked in the ring (or perform badly in the gym, on the field, etc.) because cutting left you fatigued, slow and weak. You can’t afford to waste muscle and energy while cutting.

That’s why Instant Knockout was developed: To help fighters, bodybuilders and athletes to get shredded while maintaining muscle mass, energy and sanity. We’re going to explain how it works and why it’s our top-ranked fat burner supplement in this Instant Knockout review.

Instant Knockout is for fighters, by fighters – it’s been tested and endorsed by MMA pros and boxers. Instant Knockout  solves a common problem for these athletes: Its smart formula design helps them lose weight and get shredded without starving themselves or losing muscle mass, energy or stamina. Formula notes: 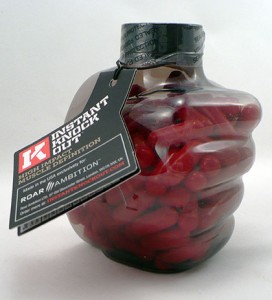 The Instant Knockout bottle will punch you right in the face. 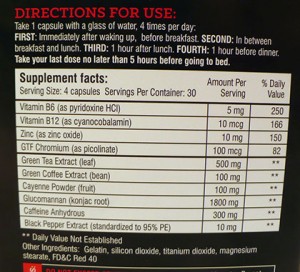 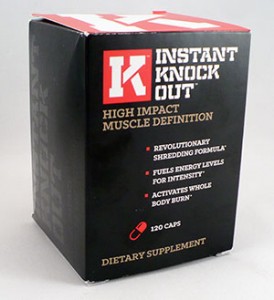 Our box was a little banged-up when it arrived. 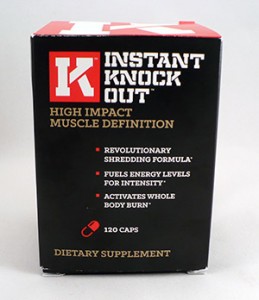 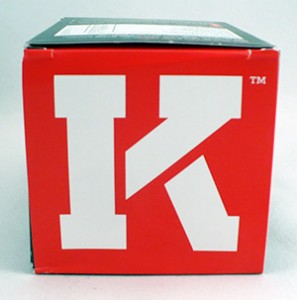 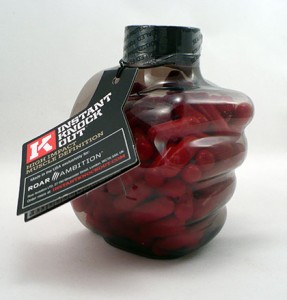 Open the box, this is what you get. The little pamphlet has supplement facts and directions. 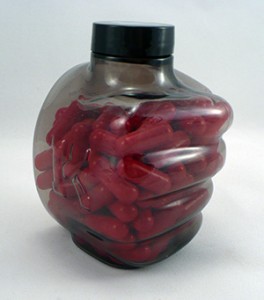 Can you tell what the bottle is yet? 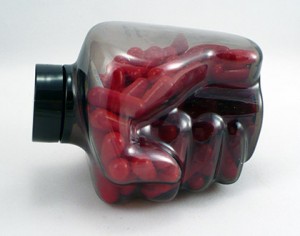 It’s a FIST, Bro. For fighting. 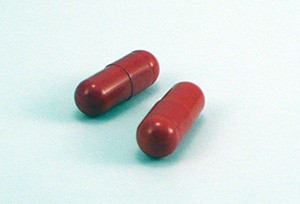 Caps are bright red in color. In this Instant Knockout review, we deduct a point for the pointless artificial colors. 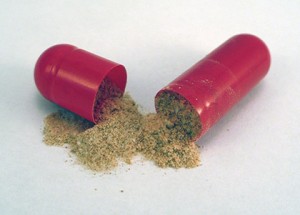 Instant Knockout is a fighter’s fat-burner – no BS, no fancy stuff, just a smart, science-based stack.

Instant Knockout gets off to a great start with a transparent label, showing dosages of all their ingredients.

The basic vitamins and minerals that follow are solid; B6 and B12 help energy, and zinc supports testosterone. Moving on, chromium picolinate is the right mineral form for blood sugar balance, appetite control and metabolism.

But let’s get to the good stuff in this Instant Knockout review:

This is one of our top-rated fat burners: An ideal leading ingredient for Instant Knockout. Green tea triggers thermogenesis and boosts metabolism, but also has digestive enzyme-regulating effects that may reduce dietary fat absorption.

Green tea’s energizing benefits have also been suggested to boost exercise performance, adding another dimension of support for fighters who are training intensely while shredding.

Cayenne pepper is a multi-tasking fat-burner. It promotes thermogenesis, “flips a switch” that tells the body to burn fat, and has appetite-control effects, too.

Cayenne also has some stimulating neurotransmitter effects that are useful for training and getting in the ring. It’s one of our favorite fat-burning ingredients, because it is effective, science-backed and familiar.

Also known as Konjac Root, glucomannan has become extremely popular in recent years as a clinically-backed “fat-loss fiber.” Is glucomannan a fat-burner? No… but it’s so freakin’ smart in this formula as a complement to the other fat-burners. Here are some glucomannan bio-activities:

Glucomannan’s endgame is to help you shred without feeling like you’re starving. By helping you feel fuller, longer,  glucomannan makes it easier to stick to your cutting-phase regimen.

Editor’s Note: For maximum effect, take glucomannan fiber with at least 8 oz. of water, so it has something to absorb in the stomach.

That covers the “Big Three” in Instant Knockout, but what remains is still pretty damn good:

Supplying active compounds called Chlorogenic Acids, Green Coffee Bean Extract (GCBE) is one of today’s more popular fat-burner ingredients. It blocks absorption of glucose from the GI tract, and then regulates glucose release into the bloodstream. This creates a 2X synergy for blood sugar stabilization, helping to keep appetite normal while minimizing fat storage. GCBE gets more buzz for its apparent ability to enhance the breakdown of fat; in that context, it is more a direct “fat burner.”

Holy shit, where did that come from? Talk about a knockout punch… out of nowhere, Instant Knockout supplies a HUGE 300 mg serving of caffeine. It’s one of the best fat-burners there is, with stimulating and energizing effects that synergize its metabolic boost with enhanced physical performance in the gym or in the ring.

Black pepper extract is a great ingredient choice because it boosts absorption of ALL nutrients in the formula and brings some additional fat-burning activity to the party.

In Rocky III, Rocky Balboa is a celebrity. He trains at a glitzy Vegas-style gym with soft poseur boxers. As a result, Clubber Lang kicks his ass.

It is only by returning to his gritty, stripped-down gym roots that Rocky can become a winner again.

What the hell does this have to do with Instant Knockout?

OK, stay with us here: When you look at other fat burners, they’re like that glitzy gym that made Rocky soft — lots of dazzling marketing, fancy ingredients & over-the-top claims… but no real substance.

Instant Knockout’s formula is like Rocky’s gritty gym: It has no-frills feel, but its reliable, back-to-basics fat-burners are so powerful and so well-chosen that it unleashes the Eye of the Tiger.

A key point we’re noticing in this Instant Knockout review: In a category littered with weight loss fads and “miracles,” Instant Knockout stands out because it is a straight-shooting fat-burner formula.

You might look at the label and shrug. There’s no marketing sizzle, no prop blends with EXTREME names, no luxury ingredients.

But don’t be fooled by the apparent simplicity. Instant Knockout is a masterfully formulated fat-burner complex, especially for its target demographic: MMA fighters and boxers.

FORMULA SYNERGY is one reason why. Instant Knockout’s got it. Check it:

But Instant Knockout isn’t just a fat-burner. The huge caffeine dosage will have energizing and stimulating effects, too. It all adds up to a highly effective fat-burner overall.

It burns fat, helps keep your appetite satisfied, and spikes your energy and alertness for peak physical performance. This might be the “Whole Body Burn” they talk about: Instant Knockout seems to prime the body for supercharged training and accelerated fat loss, with additional support that maintains your success… so your muscles don’t waste away.

Instant Knockout laser-targets MMA fighters and boxers, but is equally customized for bodybuilders and athletes. It’s ideal for making weight pre-fight, or for just getting ripped. The brand looks like it is for men, but they make a point of saying women can take Instant Knockout, too. To unleash the full fat-burning benefits of this formula, you’ve gotta train like an animal – it’s not a “sitting on your ass” fat-loss formula.

For the most part, Instant Knockout’s ingredients are well-tolerated. The cayenne pepper in raw powder form is sometimes associated with sensations of heat in the body and the stomach. And of course, that 300 mg caffeine dosage may carry typical stimulant side effects like irritability, jitters, aggression, etc.