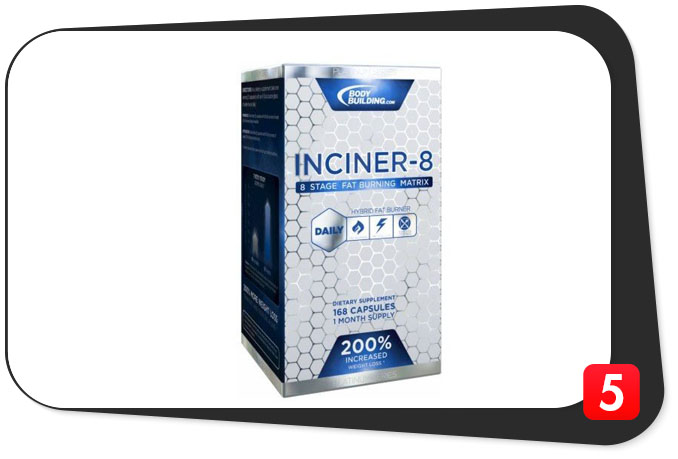 You watched that latest film by Tarantino? You know, The Hateful Eight. It was hours long but damn, that movie was definitely one of the best Tarantino has ever made. It had eight really memorable characters, bro. Those guys made the hours-long film seem too short.

I’m remembering that film because BODYBUILDING released a fat burner with a similar approach to the name: INCINER-8.

From the looks of it, INCINER-8 seems to be aiming for something like “We’re the eight elite bros of the ‘hood, bro. You ain’t messing with nobody.” It looks promising and that glossy finish makes you think it just might break all other fat burners.

The question is: Does it freakin’ work? Let’s find out!

All the bros who look up supplements and ask other guys about their stacks know what BODYBUILDING is all about so when it makes a product, we swarming like moths to a flame bro. INCINER-8 got its name from an 8-stage fat burning matrix meant to attack fat from eight angles. Formula notes:

We checked the info on each ingredient and INCINER-8 means business. The only drawback we noticed is the lack of strength in a couple of dosages. But the enhanced potency & smart combos they use more than make up for those little derps.

Let’s break down the ingredients in INCINER-8, and you’ll see what we mean:

INCINER-8 is a premium product for real, bro. It’s got the science of fat loss down to 8 smart ingredients, many of which are high-potency, but a few that probably don’t hit Critical Mass dosage.

INCINER-8 claims to do the following, so let’s have a checklist.

Editor’s Note: If you really want to tap the power of your mind to boost performance during fat-blasting workouts, it’s better to take a dedicated nootropic stack. Right now there is a buzz about this “universal” nootropic formula for that exact purpose, with Bros reporting it can help motivation, intensity & focus when double-dosed about an hour before training.

INCINER-8’s weak point on claims is on being an appetite suppressant but the rest checks out pretty well.

We are especially impressed with INCINER-8’s premium ingredients. It’s like a magic formula used by the best supplement stacks:

The one step that’s missing from the magic formula here would be to add a little Black Pepper Extract to boost the absorption of all ingredients in the formula. But INCINER-8 is fired up with so many other quality touches, we ain’t complaining, bro.

Actually, scratch that… we’re gonna bitch about one other thing: The label could be a little cleaner and more “luxury” to match the formula. The plain gelatin capsule and additives, especially that damn artificial red coloring (so pointless), don’t do justice to the premium ingredients within.

We also bitched a bit about a couple INCINER-8 dosages that look a little low. But we have to point out, this might be a calculated strategy. Mild or moderate doses of some ingredients can enable lifters can go ahead and stack with other brands or sources. For example, INCINER-8’s 100 mg caffeine is low for fat burners, but makes sense if Bros are stacking it with a separate Pre-Workout that also has caffeine.

INCINER-8 should give you thermogenic and metabolic support first and foremost. It is intelligently formulated to ignite, accelerate and sustain the fat-burning process. As for tangible energy and focus, well, INCINER-8 isn’t too intense on those benefits. Its moderate caffeine dose should give you a little bump in vitaity & alertness without feeling like someone just injected adrenaline in your neck. It’s not a super-stim-tweaked-out-freakshow fat burner formula. No, INCINER-8 is more restrained and technical; much more finesse in this stack. You might also feel a boost in performance. If there is any appetite-control effects, we think it would be minimal due to conservative dosage of Gymnema & 5-HTP.

Seeing the ingredients, we imagine bodybuilders who know how to stack their burners. INCINER-8 should appeal to the Technical Bro, he who not only knows which fat burners are backed by science, but also knows the advanced & premium nutrient forms that make those fat burners work even better. They also know which combinations work well together. Some Bros should wear lab coats to the gym, and you probably know the ones we mean. INCINER-8 is right up their alley.

INCINER-8’s use of premium ingredients is really smart when it comes to reducing side effects. The Capsimax cayenne, for example, has a special coating that eliminates the uncomfortable “stomach burn” associated with plain cayenne supplements. Similarly, the 7-KETO is special because it is an isolated metabolite of DHEA, delivering DHEA’s weight management benefits only, without all the harsh hormonal side effects of DHEA. And as we mentioned, the caffeine is moderately dosed, so the usual jittery side effects aren’t as much of a concern.

INCINER-8 is like a movie made up of an unlikely cast in an otherwise traditional film. True enough, it’s not the hottest fat burner nor is it the most versatile. Regardless, what the supplement lacks in strength it makes up with super-intelligent design — blending 8 solid fat-burners into an intriguing and unique formula, the likes of which we’ve never seen before. Premium luxury forms push INCINER-8 over the top, bro. We’re confident it will bring fat burning support you will see and feel.