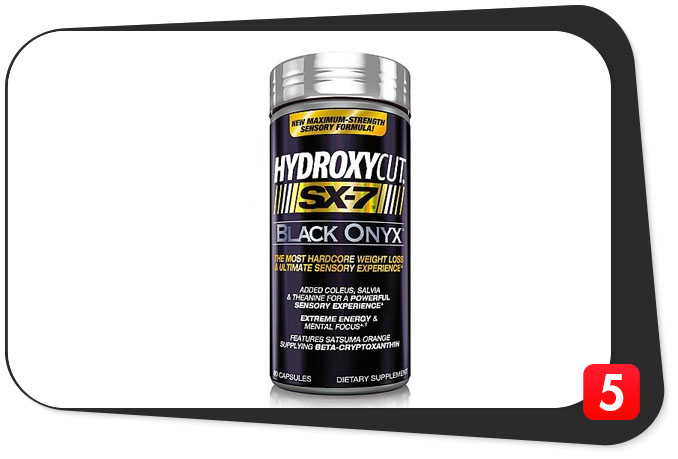 Black Onyx in particular helps release negativity, such as sorrow and grief. Like an evening primrose, black onyx shines brightest in the darkness. In the beautiful ruins of our depraved lives we—

And so is HydroxyCut’s new formula. It’s so good, it’s even earned the #5 ranking on our Best 5 Fat Burner Supplements list.

Considering HydroxyCut’s piss poor reputation with the FDA, FTC, and our livers, they definitely needed a little Black Onyx power to separate themselves from their history. This formula just might be their redemption and saving grace. CHECK IT!

HydroxyCut SX-7 Black Onyx is a new stimulating weight loss pill manufactured by MuscleTech—a subsidiary of the infamous Iovate Health Sciences Inc. Their website claims this formula is “THE MOST HARDCORE WEIGHT LOSS & ULTIMATE SENSORY EXPERIENCE”—to which we respond with a HARDCORE, ULTIMATE “Okay, sure.” Formula notes:

First let’s take a look at what’s in this updated HydroxyCut formula:

Don’t sound the alarms, but there’s a couple items we don’t like here:

Titanium dioxide is a giant WHY ingredient—as in WHY the funk is it here?? Does it strengthen the pill formula? No. Does it aid pill manufacturing? No. Its only purpose in pill supplements: Prettier colors… Not worth titanium dioxide’s risks.

Magnesium stearate lubricates the pill capsule, speeding up the manufacturing process (and thus boosting pill profits). Unfortunately, it also reduces pill digestion by up to 65%. Great for manufacturers, shit for consumers.

These “Other Ingredients” don’t necessarily scream BULLSHIT so much as they gently whisper it in small, italicized font… we’ll let you decide what’s worse.

Many consumers are quick to write off HydroxyCut due its namesake, and rightfully so. The old formulas were garbage—and even warranted a giant FDA recall (more on that later). Yet, Iovate Health Sciences Inc. did something rare with their product: They got their heads out of their asses and a redeeming, bona fide supplement.

The first sign of improvement: Each ingredient amount was shown and not hidden underneath a “proprietary blend” label. Props to MuscleTech for that.

With the dosages explicitly labeled we’re able to deduce the worth of each ingredient—and for the most part, everything seems appropriately dosed:  The caffeine isn’t overwhelming, especially with l-theanine’s “calmed focus” to reduce the jitter. Yohimbine’s fat burning potential is weak, but at least it’s not at a high enough dosage to provoke risky BP levels.

Fat Burning: Premium ingredients (green coffee bean, coleus root, and yohimbine are all standardized—two thumbs up!) mix for “decent” fat burning effects. Most importantly, HydroxyCut’s “weight loss” is no longer a euphemism for “losing a liver.”

Sensory Experience: Caffeine, coleus root, and l-theanine provide the energy and focus—additionally, coleus root aids LTP, which has positive effects on learning & memory. Salvia miltiorrhiza is slightly confusing—perhaps the coronary vasodilation increases other ingredients’ bioavailability? At the least, it sits as a potential X-factor ingredient that makes this formula even more enticing.

Will HydroxyCut SX-7 Black Onyx give you “THE MOST HARDCORE WEIGHT LOSS”? Probably not—but it will give you reasonable weight loss, so long as you also fulfill the healthy dieting/exercise caveat. Odds are that the “weight loss” will primarily include “fat loss.”

Will HydroxyCut SX-7 Black Onyx give you the “ULTIMATE SENSORY EXPERIENCE”? Sure? The caffeine, coleus, l-theanine combo (plus salvia miltiorrhiza mystery effect) does offer great mental energy & focus, with the additional upside of nootropic brain-growth.

Beefy Jerks , Chunky Chads & Brittanys. HydroxyCut’s branding generally gears towards the gym BROs and BROETTEs—primarily weightlifters looking to lose fat while they gain muscle. Not necessarily for “lay-around” weight loss. It’s effective, but all the razzle dazzle seems a little soft… probably not the right choice for those seeking a no-frills, straight-up fat burner.

Side effects are rare and commonly associated with caffeine—irritability, anxiety, sleeplessness, etc. This should only concern caffeine-sensitive consumers. The lack of side effects signifies a remarkable improvement from previous HydroxyCut formulas, which afforded a number of serious liver injuries—including one death due to liver failure. 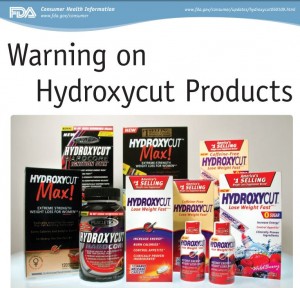 Where to begin… In 2004 HydroxyCut was incriminated in the FDA ban on ephedra, but we’ll skip that and start with 2009’s FDA crackdown on HydroxyCut. The official complaint stated:

Following the FDA warning, Iovate Health Sciences Inc. voluntarily recalled 14 HydroxyCut products. Not one year later, the supplement manufacturer found itself in hotter water when the FTC fined them $5.5 Million for misleading claims on other health & supplement products. In 2012, Iovate Health Sciences Inc. were fined another $1.5 Million to end a lawsuit instigated by 10 California counties.

Moral of the Story: It only takes 2 FDA bans and $7 Million for a supplement company to get its shit straight.

HydroxyCut escapes its morally bereft past with this HUGE comeback formula. Despite manufacturing that prioritizes profits over health, the 7 main ingredients are quality and on-point. More importantly: They work.