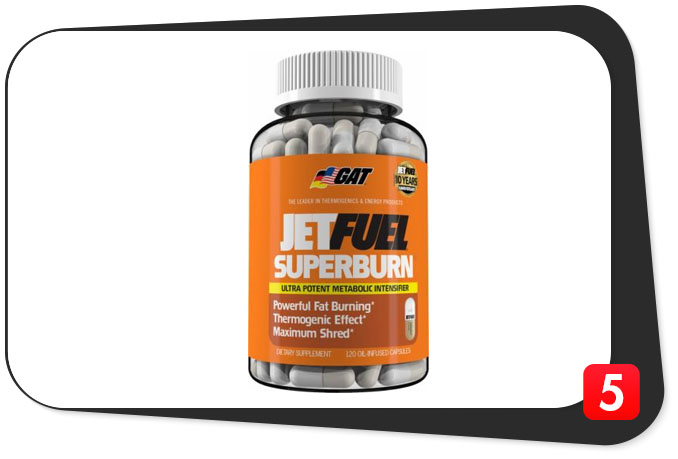 Jet Fuel Superburn will give you legitimate energy boosts and burn fat with crazy amounts of caffeine and a multi-faceted approach that includes mental enhancement.

The caffeine here is ridiculous, reaching a total of 286 mg. It DEFINITELY superburn fat, but if caffeine makes you tweak out, you might not even be able to hold proper form after taking Jet Fuel Superburn.

As conspiracy theorists are probably thinking right now: Will this Jetfuel mix be hot enough to melt steel beams? Only one way to find out!

Brought to you by industry juggernauts, GAT, Jet Fuel has been their top selling fat burner since 2005, and Jet Fuel Superburn is their newest improvement on the formula. Jet Fuel Superburn claims to be a clinically proven cutting and hardening catalyst, and it does so with the use of three proprietary formulas. The 2015 edition improves mainly upon the product’s labeling, offering 100% transparency on each of its active ingredients.

Jet Fuel Superburn was designed to accomplish four things: Burn calories, break down fat, provide mental alertness, and deliver it all rapidly. This is due to distinct, powerful ingredients proven to deliver on each of those functions.

One of the first things you’ll notice about Jet Fuel Superburn is that it’s tea-heavy, with three different tea extracts involved. This is good news, since not only are each of the tea-based ingredients natural, but they each bring a host of proven health benefits to the mix.

However, the dosages for each are really small so we doubt the EGCG will make any difference. Still, these teas still provide another function in the form of added stimulant boost. The extra caffeine they contain boosts the total from 275 mg to 286 mg. By any standard, that’s a lot of caffeine to ingest in a single dose, but it’s nice that a lot of the ingredients are natural and recognizable.

Bioperine is good to see on the ingredients list as well, since among other positive benefits, it’s known to greatly assist the body in the absorption process. Essentially, the other stimulants in Jet Fuel Superburn will metabolize a little more quickly and effectively due to the 5 mg of Bioperine.

Ultimately, you don’t have to worry about Jet Fuel Superburn working as an energy booster or fat burner, because it contains a shotgun blast of stimulating ingredients that virtually guarantees a noticeable impact. I mean, that AdvantraZ alone is probably like a big ‘ol cannonball.

Think about it: AdvantraZ is probably the most potent form of Synephrine and it’s something that works in as little as 25 mg but you get 150 mg here. Let’s not forget the powerful Synephrine+Caffeine stack we’ve all probably heard or read somewhere. It’s popular for a reason and we think Jetfuel Superburn capitalized on that stack’s amazing user feedback.

Even if you have a high caffeine tolerance or you’ve become used to Yohimbe because you’re taking it in other products, there is still enough powerful stuff here to ensure that even the hardcore athletes are going to feel it.

This latest edition of Jet Fuel Superburn is packed with ingredients that have tried and true benefits, from the assortment of potent tea extracts, to stimulants like Cayenne and Yohimbe Bark. Equally impressive is the forethought they put into countering caffeine-related side-effects, a feat they accomplish with anxiety-reducing ingredients such as Lemon Balm.

Knowing that the majority of Jet Fuel Superburn’s components are natural will be appealing to a lot of people as well, because it feels safer to ingest recognizable ingredients like olive leaf and lemon balm than a bunch of man-made chemicals. The fact that GAT is a juggernaut of a supplement company that has been in the game for decades also adds some measure of credibility.

Jet Fuel Superburn is a strong fat burner that could be considered hardcore compared to some of the more mainstream metabolism-boosting supplements. Therefore, bodybuilders and fitness nuts who are striving for top-levels of performance and minimal body fat are ideal candidates for Jet Fuel Superburn. However, the product contains legitimate anti-anxiety effects as well, so feel free to try it in other circumstances where mental vigilance and tons of energy are required.

With a winning combination of 100% transparency, an intelligent formula, and a list of mostly natural ingredients, Jet Fuel Superburn will have your metabolism breaking the sound barrier. Just be ready to cough up the dough, bro. I mean, actual jetfuel isn’t cheap either so I guess this is kinda like the same thing.