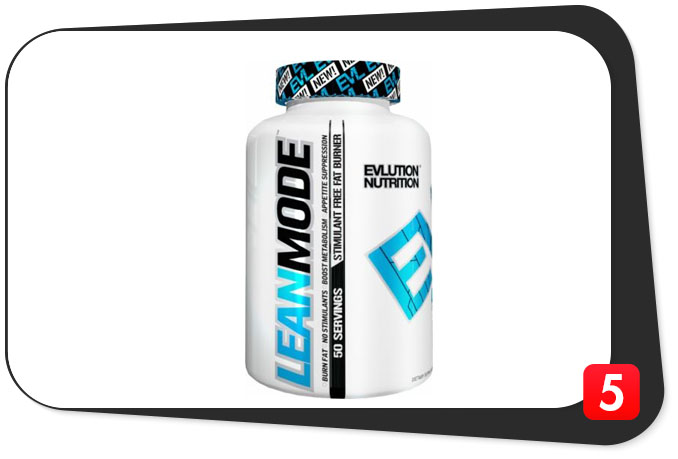 Expecting a powerful stimulant effect from your fat-burner?

You won’t find it with Evlution LeanMode.

You won’t find a convoluted list of fat-burner ingredients that’s a mile long, either.

What you WILL get with Evlution LeanMode is a stack of science-backed weight management nutrients that’s simple enough to hit good Critical Mass dosages across the board. Let’s check it out.

Powered by five main ingredients only, Evlution LeanMode is a highly focused fat burner that avoids the use of stimulants. It ultimately works via “5 fat-burning modes of action” that combine into a solid, evidence-driven stack. Formula notes:

If you want to support your fat-burning efforts without feeling like a tweaker, then stimulant-free Evlution LeanMode might be the right formula for you. Let’s check out its five key ingredients:

Garcina Cambogia Extract has a multi-powered fat-burner effect; it may block fat storage enzymes, promote fat metabolism, and help with appetite control. Hyrdoxycitric Acid (HCA) is the active compound behind these benefits; it’s nice to see LeanMode standardizing their garcinia herb to a potent 60% HCA.

This legendary weight-management compound triggers thermogenesis, modulates appetite hormones, and supports metabolic rate. It is valued as a supplement for lean body mass and ideal body composition. If you want to get shredded, this is a compound that belongs in your fat-burning stack.

Also simply called “ALCAR,” this amino has a big reputation for fat-burning that isn’t really that evidence-backed. The theory is, ALCAR helps funnel fatty acids into cells’ power plants, where they are incinerated for energy. This is believed to speed up fat-burning while optimizing peak energy levels. We think it’s just OK as a fat burner, but ALCAR makes sense here — as long as you combine LeanMode with a training program, which you should be doing anyway — because it also helps with gym performance and recovery.

Green tea is our #1-ranked Best5 Fat Burner ingredient, also found in our #1-ranked fat-burner supplement. Leanmode uses a high-quality version of Green Tea Extract standardized to 60% EGCG, which is the active polyphenol most responsible for its weight-management benefits. Green Tea promotes peak energy and enhanced metabolic rate; it also supplies antioxidant activity that helps protect cells against damaging free radicals that are generated during the fat-burning process.

Loaded with well-known fat burners and no stimulants, you won’t find anything unnecessary or suspicious in Evlution LeanMode.

The absence of proprietary blends means there is more room for the stuff that matters. Dosages in Evlution LeanMode look strong, with four of the main five ingredients dosed at 500 mg per serving.

Plus, LeanMode supplies its 3 herbal fat-burners as enhanced-potency standardized extracts, which increases the formula’s relative power-per-capsule even more.

*There’s another claim bouncing around in LeanMode’s marketing content, suggesting it helps a “Positive Mood.” This claim is probably related to Garcinia, but only very weak evidence supports that idea, and we can’t buy into it.

Still, the rest of the claims check out, forming a smart, clean and efficient fat-burning stack that works across several weight-related pathways.

Simplicity is a good thing in fat burners, because you know exactly what is there and what isn’t. This is especially true when high-quality versions of each ingredient are used, which is the case for Evlution LeanMode.

We also salute Evlution’s decision to include minimal extras and fillers. It’s not the cleanest label we’ve ever seen, but it’s still damn clean, which speaks to the quality and value of Evlution LeanMode.

Reliable, stimulant-free fat-burning activity. Since many fat-burners can leave your heart racing while their stimulant chemicals surge through your body — and that’s on TOP of the caffeine and energy drink you had before your workout — the simplicity and transparency of Evlution LeanMode is a bold step in the right direction for fat burners. The ultimate benefits are as advertised: Fat loss help via a few different pathways, including appetite control, metabolic support, and fat-burning.

The only thing hardcore in Evlution LeanMode is its pure, fat burning potential, so anyone who wants to burn fat without getting too hyped up can use the product. The lack of stimulants means Evlution LeanMode is not just for gym rats, so everyone from soccer moms to truck drivers can reap its metabolism-boosting benefits. We like how LeanMode so effectively comes together as a stimulant-free fat-burning stack. Sometimes it sucks to feel like your body is running at top speed due to aggressive fat-burners, when you’re just trying to chill or focus.

The typical side effects found in fat burners, such as jitters, are simply not an issue in Evlution LeanMode due to its concise formula and lack of caffeine. Plus it’s simple & natural, with only 5 well-tolerated ingredients — so your body won’t get confused or blindsided by wacky or harsh fat-burners.

Sporting credible ingredients that will burn fat without revving you up, Evlution LeanMode a refreshingly clean, “NO B.S.” weight loss product. For its premium quality, intelligent stacking strategy and science-based ingredients, we give it a big thumbs up.