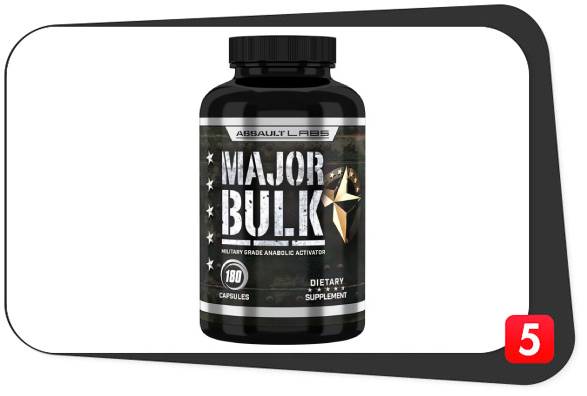 The lines between natural anabolic supplements and T-boosters are a little blurred. Both aim to aid muscle building, T-boosters with the sole focus of raising testosterone and anabolics taking a broader approach.

T-boosters have a much bigger market share, and, at the high end of the market, they’re usually formulated with a more effective focus than natural anabolics. But that’s not to say there aren’t some seriously great natural anabolics out there.

Assault Labs likes to make big claims, and Major Bulk is no different. It claims to offer big doses of research-backed ingredients that work synergistically together to help you build muscle. I like the sound of that.

There’s no talk of testosterone elevation, which firmly places Major Bulk in the natural anabolic spot. An initial look at the ingredients shows some unexpected inclusions that we’re pretty hyped to get stuck into.

Major Bulk by Assault Labs talks about BIG doses and so far, I’m not so sure. It’s marketed as a ‘military grade anabolic activator’ (whatever that really means), but it’s a little opaque in that it doesn’t really talk about what it is. So, for the newbie, this might seem like an oddly placed supplement in the marketplace with a strange list of ingredients.

But putting off beginners could be a good thing because… it is really expensive. So is this interesting formula worth the big price tag? Let’s find out by looking at the ingredients:

Vitamin D is a super common ingredient found in testosterone boosters for the simple fact that if you’re deficient in D, one of the symptoms can be reduced testosterone. It’s a thoughtful addition and D3 is an easily absorbed and an effectively used form of the vitamin.

Research has shown a slight increase in testosterone in men over the course of a year while supplementing vitamin D.

Recommended daily dose of vitamin D is currently at 400-800 iu, which would put this right in the middle with 500 iu. However, research shows that this is not sufficient for adults.

One study showed that trained men taking 750 mg of phosphatidic acid per day for 8 weeks increased their lean body mass by 2.6% compared to 0.1%. Bear in mind these are well-trained men who will have hit a plateau in their gains.

It’s also been linked with accelerated fat loss in training individuals, but in the more recent research, findings are ambiguous.

The only problem with phosphatidic acid is that it seems to interfere with whey protein absorption. When taken together they reduce the efficacy of both.

Ursolic acid is the active ingredient in the Ayurveda herb, Holy Basil, and is also found in apple skins. It is another ingredient that shows promise but needs more research to prove that you’re getting what you pay for in terms of efficacy.

It has been linked with increased muscle mass and fat loss, however many of the studies have been done in rats, and only preliminary human research has been done.

Where the last couple of ingredients showed promise, maral extract, also known as maral root, is what I would refer to as a label builder.

It looks good, has a good story — Assault Labs refer to how Russian WWII soldiers used maral root to “recover strength from battle” — but has little to no human evidence supporting its claims.

Maral Extract contains an ecdysteroid called 20-hydroxyecdysone. This is an insect hormone that seems to increase muscle size in rats. Which… on the outset you might think sounds reasonable.

But 20-hydroxyecdyson has a half-life inside the body of 8 minutes which means when consumed orally, it wouldn’t reach the muscles. This led to researchers administering the hormone into the muscle tissue of rats by injection.

5a-Hydroxy-Laxogenin is a brassinosteroid, or plant steroid, that can be found in mustard, and… you guessed it, there’s not enough research to show that they have any effect in humans.

Piperine, the active ingredient, is a great addition to see and shows that Assault Labs does care about the ingredients they’re including in the formula.

Black pepper extract effectively protects the other ingredients it’s taken with. It does this by inhibiting enzymes that would otherwise break down the other active ingredients before they’re absorbed.

Assault Labs have produced an interesting supplement here that seems to be centered around different types of (non-human) androgenic ingredients. It’s innovative and promising, but this is all theory.

Let’s take a step back… in theory, Assault Labs wanted to:

The problem starts when you realize that the core ingredients have very little to zero evidence of initiating muscle protein synthesis, reducing muscle breakdown or burning fat in humans. Ursolic acid, maral extract and 5a-Hydroxy-Laxogenin have theoretical benefits, all of which are inferred from scientific studies that involve rats.

In the case of maral extract, it had to actually be injected into the rat’s muscle tissue to be effective.

When it comes to Mediator (Phosphatidic Acid) there is promising human research in its ability to activate mTOR to the point where we can consider it as a viable ingredient. Assault Labs delivers in this by providing the research approved dose that saw the benefits. But… the downside is that research is still open to debate and it conflicts with whey protein. If you take this and whey, which is pretty likely, then both ingredients will be dampened.

The Cornerstone DL-Leucic acid is an odd choice simply because there are far more powerful and well-researched ingredients to halt muscle breakdown and instigate muscle building. Its parent molecule, leucine, for example, or the previously mentioned HMB — a potent anti-catabolic.

It’s also worth noting that with the exception of phosphatidic acid, there is no human research-backed ingredient here that will help you burn fat.

So, if we return to our 3 points. 1. Muscle building and fat burning. 2. Halt muscle breakdown. 3. Make our ingredients bioavailable…

The only real winner here is BioPerine, a great ingredient which makes sure your body absorbs as much of the other ingredients as possible. Which… is kind of ironic, because they won’t do all that much.

We struggle to find a big positive with Major Bulk. As much as we’d love to buy into the innovation and the interesting use of unusual ingredients, the research simply isn’t behind them. Especially at the very high price.

Major Bulk is marketed to both men and women in the general fitness to bodybuilding market who’re looking for a supplement to enhance their muscle building without boosting their testosterone.

There is some concern over maral extract as it’s thought to slow blood clotting, and so might increase the risk of bleeding and bruising in some people. Because of this it is also advised to stop taking maral root-derived products 2 weeks before any surgery. 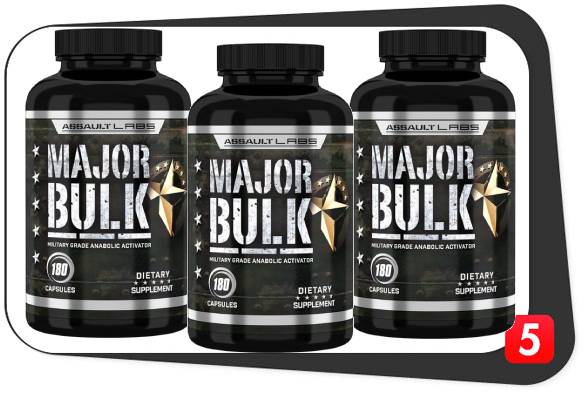 Assault Labs Major Bulk Price and Where to Buy

Major Bulk is a product I could, conversely, get behind if it was much, much cheaper. Simply because it is an example of innovation in the natural anabolic market and it’s this sort of product that gets people talking and interested in researching more into areas like phosphatidic acid.

However, the marketing and language is clearly aimed at consumers expecting big results, and you simply won’t get that with this supplement.

The high price is probably down to the unique ingredients and the price tag that comes with them, but this high price infers high-quality. This is a problem for the manufacturer that’s passed onto us, the consumer, and when you investigate the ingredients it comes across as a cash grab for interesting sounding ingredients that may not work.

It’s a big shame when innovation doesn’t pay off, but in this case, I’d check out some premium alternatives with proven ingredients. At least when you pay for them, you know you’ll reap the rewards.