Fat burning supplements are without a doubt one of the most popular supplements out there, and it’s obvious why. The inherent promise that if you take a supplement you can burn fat without doing anything is too tempting for many people to resist.

Of course, fat burning supplements don’t really work like that, if they did, they’d be more popular than Coca Cola.

For starters, not every fat burning supplement is created equal.

As a result, it’s important to choose the ‘right’ fat burner. It is important, however, to manage expectation.

Taking a fat burner should not be done in a vacuum; on their own fat burners are not going to do anything.

They need to be combined with a calorie-controlled diet, an increase in physical activity (walking more, sitting less, joining a gym, going for runs etc.). When you have everything in order, an effective fat burner can help widen that calorie deficit (where you are burning more calories than you are consuming). The bigger the calorie deficit, the faster you burn fat.

About Lipo Shred by Titan Nutrition

Titan Nutrition is an American supplement company that was founded in 2005, that’s all we know … their “about me” section leaves a lot to be desired. In the 14 years that they have been in business they have built themselves a reputation for creative products.

Lipo Shred is a fat burning supplement that promises to a step above the competition (of course, all fat burners say that). Not only does it promise to increase your metabolic rate and therefore fat burning capacity, it also promises to maximize thyroid output, increase focus and energy, reduce your appetite, and remove excess water.

While this may seem like Lipo Shred is miles ahead of the fat burning competition, you should realize that most fat burners provide the same benefits, they just market it differently. But let’s take a look at the individual ingredients before rushing to any conclusions.

Due to Lipo Shred being quite a powerful supplement, Titan Nutrition recommend easing yourself into it. Take just one capsule (half dosage) twice per day for the first two to four days. This will help you assess your tolerance (as well as slowly building up your tolerance if required). After four days you can increase the dosage to two capsules twice per day (for a total of four capsules).

There are seventeen ingredients present in Lipo Shred so we’re only going to briefly go into each one (or this review would read like War & Peace). We won’t skip out any ingredient though, as they are all interesting.

It’s incredibly rare to find a fat burner that doesn’t contain caffeine. That’s because caffeine is one of the best ways to oxidize fat and raise your metabolism. Caffeine taken pre-workout can also allow you to train harder and for longer. Kind of a double-whammy then.

The downside of caffeine is that your tolerance can build up quick (many people who drink a lot of coffee may already have too high a tolerance to see any results). This stimulant is also responsible for jittery side effects in large dosages too.

But a solid ingredient first up, at a decent dosage.

Here’s the problem – 440mg of caffeine per day will certainly raise your metabolism, but it is slightly over the recommended safe daily limit of 400mg. And could put you at risk of side effects, in our honest opinion).

As a result, we recommend keeping stimulants separate from fat burners.

By this we mean investing in an advanced stimulant that you can ‘stack’ with a non-stim fat burner – so you are directly in control of your caffeine intake at all times.

Forskolin is a herb that can increase a molecule called cyclic adenosine monophosphate (cAMP) which can lead to a small degree of fat loss in overweight and obese men (may also work on women but the study was performed on men) [1]. It may also reduce fatigue, which may help you to train and function while on a diet.

This is where things get interesting/shady. Octopamine is a metabolite of synephrine. It is found in bitter oranges, and is often described as such on supplement labels, full credit to Titan Nutrition for their honesty. The thing is, Octopamine may well be a very effective fat burning ingredient. However, it is currently on the banned list by WADA, meaning that if you participate in sports you NEED to avoid Lipo Shred. If you aren’t an athlete, then you should still consider the pros and cons. Octopamine is theoretically safe enough, but there is a reason why WADA banned it.

Like Octopamine, yohimbine extract works but is controversial. Studies have shown it to be effective at reducing body fat [2] but it can also lead to increased anxiety as well as increased cravings for alcohol (the belief is that it reduces inhibitions).

Evodiamine is a chemical compound that is believed to work in a similar way to capsaicin. Raising your body temperature and causing your metabolic rate to increase, which can help increase fat loss. No studies on humans have confirmed this, but we do know that it works as a thermogenic – which can certainly increase your metabolism. The jury is definitely out on Evodiamine.

While Titan Nutrition mention that macuna pruriens works as a mild thermogenic (see evodiamine) the main reason for its inclusion is for its nootropic properties. Studies have shown it to reduce stress [3] and it may also improve testosterone levels in men with low T scores.

Added in by Titan Nutrition to improve brain function, beta phenylethylamine is fairly useless as a supplement as it is “rapidly broken down into inactive components” [4].

This ingredient has been added to improve your mental wellbeing and to reduce mental fatigue. It works on both counts, with studies indicating that it can reduce stress, increase cognition, and improve memory.

This is a prohormone that has been shown to be effective at increasing your metabolism and burning fat, however it should be noted that 7 keto DHEA is currently being looked at by the FDA and may be banned in the future. The dosage is also a little low, the ideal daily dosage is around 200-400mg per day, but Lipo Shred contains just 30mg per serving (60mg max per day).

Exact same ingredient as 7 Keto DHEA, just different names. We are not sure why Titan Nutrition have written the ingredients list this way.

Has been added to reduce nausea and the jitteriness that can be associated with certain stimulants such as caffeine.

White willow bark is home to the active ingredient of aspirin (salicin), when combined with caffeine and synephrine you get an enhanced calorie burning experience, hence its inclusion.

Vitamin B3, used to control how your body deals with energy, a clever addition for a supplement that affects metabolism as much as Lipo Shred does.

This is a pigment found in brown seaweed that has recently been looked at as a fat burning ingredient. A study on obese women saw a small but significant increase in fat loss compared to the control [6]. Fucoxanthin may be an effective fat loss ingredient but at the moment there just isn’t enough evidence to say for certain.

This has been added as it is a powerful diuretic, which can be helpful at removing subcutaneous stored water. However, this can be quite dangerous as it may lead to dehydration. The long-term effects are fairly unspectacular too.

Also added in for its diuretic properties. 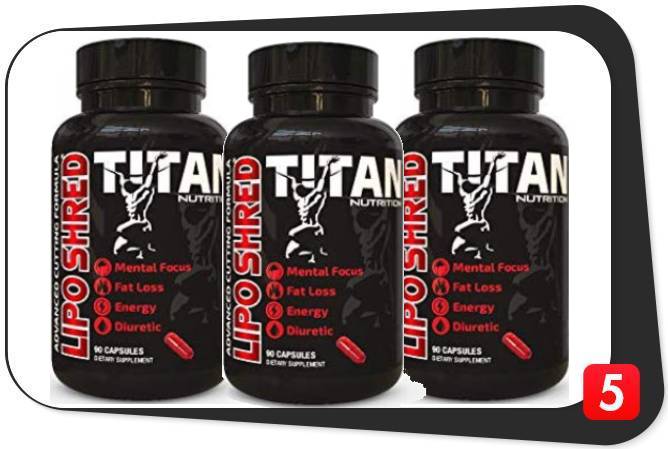 The main benefit of Lipo Shred is that it works! There are some good, powerful, fat burning ingredients present here. As well as many ingredients that can prevent fatigue, improve concentration and cognition, and help you to train harder and for longer in the gym. This is a nicely rounded supplement, and provided you stay within a calorie deficit you should see some excellent fat burning results from it.

This could definitely be used by either men or women, but thanks to certain ingredients such as yohimbine we can see that it is slightly more aimed at men. Many of the ingredients only work well on the overweight or obese, but someone who is looking to lose that last lb. of body fat may also be quite pleased with the results. Due to the high caffeine content, as well as the inclusion of Octopamine, 7 keto DHEA, and other ingredients it would not be suitable for anyone with heart health issues.

Titan Nutrition have really thought this ingredients list through and have included certain ingredients such as Mucuna pruriens and ginger to offset the side effects of powerful ingredients such as caffeine, but there may still be some side effects. Jitteriness, nausea, insomnia (if taken too late during the day), dehydration, headaches, and you’ll be sweating a lot too! You will feel very hot and your heart rate/blood pressure will be elevated for at least a couple of hours after consuming each serving.

Lipo Shred Price and Where to Buy

You can purchase Lipo Shred directly from the Titan Nutrition website, but it is also available in most supplement shops. A bottle of 120 capsules should last you 30 days (two servings of two capsules per day), but to be honest that’s probably as much as you would want! The cost is $59.99 with free shipping, meaning that each serving works out at about $1 or $2 per day.

Here’s the thing, Lipo Shred may be one of the most powerful and effective fat burners that is currently on the market. But it is border-line dangerous to use. These capsules contain high levels of caffeine, a couple of ingredients that are banned or are soon to be banned, and many other ingredients that are going to have an extreme effect on your metabolism.

This supplement is not going to be a pleasant experience to take, you’re going to sweat, you are going to feel hot at all times, you may feel jittery, nauseated, and you may experience dehydration unless you increase your water intake by a lot.

It’s difficult to review because some people will happily take the risks associated with such a product because they are so desperate to reap the benefits. But there are more sensible options out there, and they won’t get you banned from all sporting competitions at the same time!