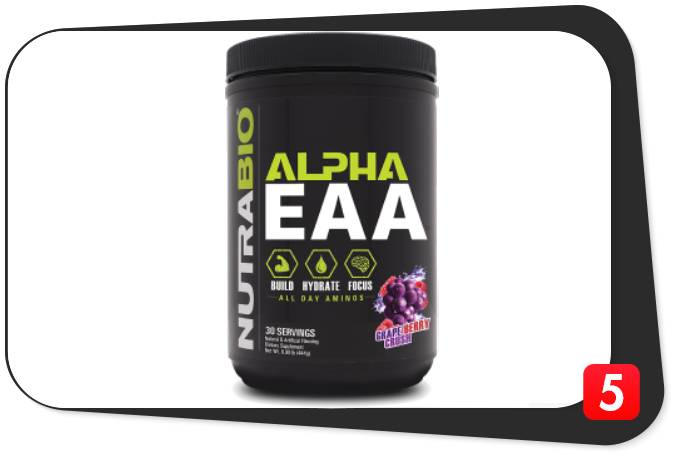 Amino acids are the building blocks of proteins, and therefore regulate almost everything in the body. From hormones to muscle building, nervous function to transport, amino acids are vital. NutraBio Labs offers their “no compromise” commitment to clean, pure, and effective supplements to the amino acid game. Alpha EAA promises energy, hydration, and recovery through their specially formulated amino acid profile.

Alpha EAA contains both BCAAs and other essential amino acids, as well as hydration and nootropic elements. They claim their supplement balances cortisol levels, aids muscle contractions, promotes recovery, and improves memory and focus. That’s a pretty wide range for one formula. While BCAAs definitely facilitate muscular recovery, we wouldn’t call this a BCAA supplement. It’s not your standard pre-workout either. A better label would be a stack or blend targeting every area of performance. Let’s see if Alpha EAA is truly “the perfect addition to everyone’s supplement regimen” that they claim to be.

According to the label, the ingredients in Nutrabio Alpha EAA are as follows:

Sodium acts as an electrolyte to nourish fluid balance within the body. In this supplement, however, it’s likely included for flavor. Add a pinch of salt. Why not?

Adding BCAAs to your pre-workout regimen is scientifically proven to set off anabolic processes. They help muscles grow, limit protein degradation, and assist in recovery. Somewhere between 1-4g of leucine is required for protein synthesis and growth hormone stimulation. Isoleucine helps convert blood glucose into glycogen stores, which is critical to muscle mass and performance. Valine, the third BCAA, improves immune function and enhances amino acid uptake into muscle tissue. The three truly combine for a magical muscle mix. Alpha EAA does well to double the amount of leucine, as it’s the most potent, and appropriately dose all three.

Like many other proteins in the body, lysine helps with tissue repair. When broken down, lysine forms glutamate and acetyl CoA – a neurotransmitter and metabolic intermediary, respectively. Furthermore, lysine hydroxylase enzymes synthesize collagen, a big part of your connective tissue. Red meat, cheese, soybeans, eggs, and more contain lysine as well. As long as you’re eating a balanced diet, (and know you’re not lysine deficient) you don’t really need this supplement.

Threonine helps form serine and glycine, amino acids involved in immune function and neurotransmission. Glycine particularly inhibits excitatory neurons in your central nervous system. It’s basically a failsafe that keeps you from getting overly stressed or energized. Basically all types of meat contain adequate threonine, so this amino acid is particularly of interest to vegetarians and vegans.

Phenylalanine levels are extremely high in the brain due to its role in catecholamine synthesis. However, it runs through tyrosine, as tyrosine hydroxylase levels are truly the rate-limiting factor. Adequate protein intake suffices to fill up both tyrosine and phenylalanine stores, so you really only need a supplement if you’re on an incredibly low protein diet.

Histidine’s biggest impact is combining with beta-alanine to make carnosine. When muscle carnosine levels are high, it shuttles lactic acid away to reduce fatigue. Therefore, you can train harder for longer before petering out. Beta alanine tends to be the limiting factor, however, so histidine supplementation isn’t really necessary. Although, during levels of intense stress, histidine deficiency is associated with infection and chronic fatigue. If you know you’re low on histidine for whatever reason, make sure to supplement it. But you can also get it (again) from most animal meats, tofu, pumpkin seeds, eggs, and more.

Tryptophan is vital to energy production and serotonin levels. On one hand, tryptophan helps build NAD+ and NADP – two compounds that donate/receive a phosphate with ATP and ADP during energy metabolism. Not enough dietary tryptophan means not enough energy. Additionally, tryptophan becomes 5-HTP to build serotonin, the neurotransmitter that balances mood and calm. In general, it’s a good amino acid to have around.

Methionine, the final essential amino acid, helps build structural tissue, produces cysteine, and precedes creatine. Most of us know the importance of creatine, but in case you don’t, here’s a synopsis: creatine fuels short, high-intensity activity before carbs or fats take over. By creating cysteine (which, in turn, forms taurine), methionine theoretically impacts mental function. But it takes a lot of steps to get there, and there’s no telling where methionine will go once it enters your bloodstream.

The makers of Alpha EAA must have known methionine doesn’t always lead to taurine, as they’ve included it on its own. Higher taurine levels correlate with quicker recall, better memory, and improved mood. It’s also an antioxidant that counteracts oxidative stress within the body. These effects protect your cells from damage, keeping them healthy and high-functioning. It can also protect you from stress in other ways. One animal study showed that taurine supplementation reduced adrenaline output from the adrenal gland.

Coconut water includes electrolytes such as calcium, magnesium, sodium, chloride, and – more than anything – potassium. Potassium regulates muscle contraction to reduce cramping and enhance performance. Especially during high temperatures or tough workouts, you need to replenish potassium and other electrolytes to maintain optimal function. It’s not a great source of sodium, however, which you need for cognitive function.

Alpha GPC Powder and Choline Alfoscerate are one in the same.  Through choline supplementation, you get one part of the neurotransmitter acetylcholine. When combined with an acetyl group, choline increases neurological signaling and elevates cognition.

Ashwagandha has been used in Ayurvedic medicine for centuries. Its properties optimize the hypothalamic-pituitary-adrenal axis, or HPA for short. Your HPA axis controls the hormonal stress response Research shows that, by helping maintain HPA function, ashwagandha fights elevated cortisol levels and anxiety. Scientists gave participants 300mg to elicit this response, which is the exact does in Alpha EAA.

Another choline donor, VitaCholine claims to be the “premier source of choline”. It provides the building blocks of phosphatidylcholine and acetylcholine. Through supplementation, amounts of these compounds build up, enhancing neuronal transmission and cell membrane vitality. We’re interested to learn exactly how much choline comes out of this combined with Alpha GPC powder.

Huperzine A is an ingredient found in Chinese Club moss. As a medicinal herb, it’s used in the treatment of Alzheimer’s, dementia, and certain types of muscle weakness. Research has shown its use as a neuroprotective agent and in rebuilding new neurons.

It’s also an acetylcholinesterase inhibitor, which means it stops the breakdown of the neurotransmitter acetylcholine. As this neurotransmitter regulates the neuromuscular junction, huperzine A could help with muscle contraction under high stress. Supplementing huperzine A at 50-200mg is associated with upgraded cognition, so that’s likely the reason for its inclusion.

Panax notoginseng and Astragalus membranaceus, the two compounds in AstraGin, are designed to enhance absorption. By including it in Alpha EAA, NutraBio attempts to make their supplement more bioavailable.

As it’s designed to be mixed with water, Alpha EAA needs some ingredients that make the drink taste good. Rather than use sugar, they implement sodium, flavoring, and artificial sweeteners. Artificial sweeteners have been shown to negatively affect your gut microbiome, so it’s possible this counteracts any “increased absorption” from AstraGin. 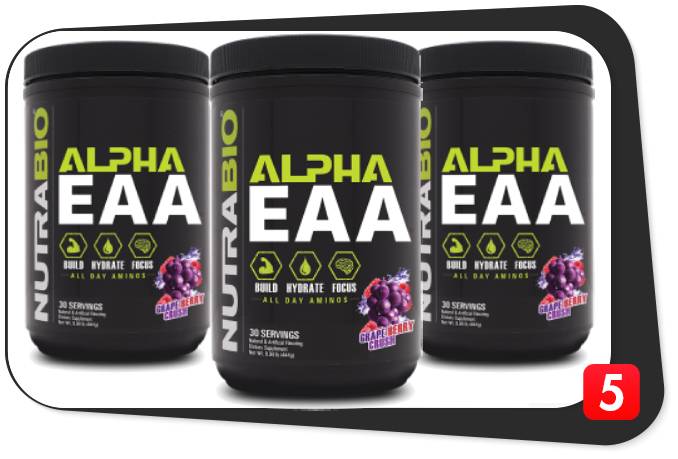 NutraBio Alpha EAA did well to include all of the essential amino acids. Featuring 6g of BCAAs, this supplement offers the low end of the required amount for protein synthesis. An even higher dose is suggested for cognitive benefits of BCAAs, but the leucine-to-valine/isoleucine ratio is on point. Experts recommend double the amount of leucine to stimulate mTOR.

As far as the other amino acids go – that’s a different story. Threonine supplementation of 500mg did well in a pilot study of 6 people, but that’s a single study in less people than a basketball team. Supplementary lysine seems to work for vegetarian fish and dairy cows, but human research is questionable. Studies show that histidine supplementation alters the concentration of other amino acids in obese women with metabolic syndrome. Yet there’s no conclusion as to whether that’s positive or negative. Adding phenylalanine improves the total phenylalanine levels in people with tyrosinemia, but that’s a small, already-deficient population. Small levels of methionine supplements seem safe in health adults, but high levels have proven toxic

Long story short – unless you’re deficient in one or more of these amino acids, you won’t benefit from this supplement blend. Plant-based dieters might see small improvements, but it’s really from the BCAAs. In our opinion, NutraBio should have stuck to an enhanced BCAA supplement.

A few other ingredients are promising (VitaCholine, Ashwangandha, taurine, CocoPure), so we’ll give them the hydration and nootropic benefits. Still, tons of supplements do it better.

Alpha EAA provides the following benefits to those who take it:

Potential Side Effects of Alpha EAA

At high levels, methionine supplementation has led to severe consequences, even death. Don’t freak out just yet – that was with 10 grams, and one serving of Alpha EAA only contains 0.25 grams. Just be careful not to guzzle it down.

Known side effects of other ingredients include:

Not what you want? See Our #1 Rated
– BCAA Supplement Here –

Alpha EAA Price & Where to Buy

Don’t waste your money on this supplement. Instead, invest in a good BCAA, a strong nootropic, and eat your protein.