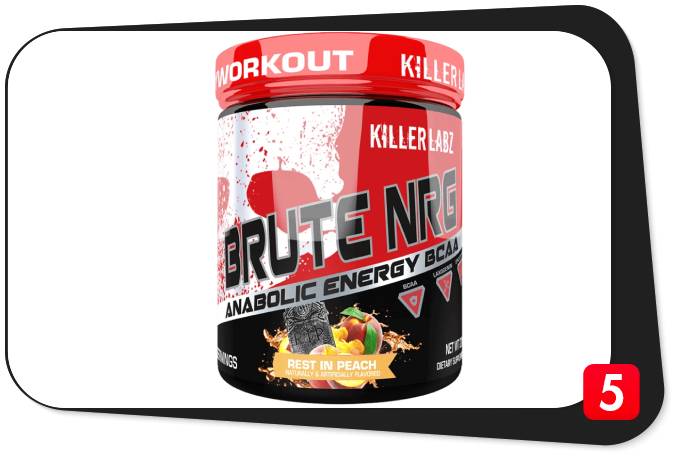 What do we look for in a good pre-workout? Energy, blood flow, and motivation top the list. Most of all, we want something that helps us build muscle or perform better in the workout to come.

Killer Labz Brute NRG claims to do all of the above.

What’s new in Brute NRG? As the name would suggest, they’ve added caffeine and TeaCrine, two stimulating ingredients for an extra kick.

Frustratingly, Killer Labz doesn’t give us the dosage breakdown of each ingredient. Therefore, you may be getting 6100mg of black pepper and 10mg of everything else.

While we can assume it’s not that extreme, any proprietary blend causes concern. Nevertheless, let’s dig into the supplements, what they can do, and how much of each you’ll need for effect.

The three branched-chain amino acids, leucine, isoleucine, and valine, make up a majority of your amino acid pool. When your body needs these building blocks of protein, it reaches into the available pool first.

Available leucine helps activate mTOR, a pathway to protein synthesis. Therefore, it’s critical to stimulating muscular growth after a workout. Isoleucine helps convert blood sugar into glycogen within the muscle, storing it for later use and providing fuel for exercise.

Finally, valine (and the other two, as well) limits the breakdown of muscle proteins.

Combined, you get a net positive protein balance and an increased anabolic response. Research shows you need somewhere between 1-4 grams of daily leucine, with half the amount of valine and isoleucine, for best results. It’s possible Brute NRG meets these requirements, but we simply don’t know.

Taurine, a conditionally essential amino acid, helps control neurotransmitter activity in the brain. By controlling GABA activity, it inhibits excitatory signaling. Interestingly enough, that actually makes it a sedative – but probably not how you’re thinking. Instead, it can calm you down and limit distractions when you need to focus. It’s also been shown to reduce blood pressure in rats through vasodilation.

Killer Labz suggests it enhances cell volume and hydration. As blood transports water, oxygen, and other nutrients, this line of thinking makes sense. But what’s really key is its role as an osmoregulator. Basically, it controls salt balance in the cell by responding to what else is going on in the body. If a person consumes a ton of sodium (without enough water), supplemental taurine could cause dehydration. In cases of low sodium, however, it protects against dehydration through maintaining cellular fluid balance. As exercise correlates with sweat-based sodium loss, taurine is likely beneficial in this case.

Alanine provides a little-known source of energy for working muscles – pyruvate. Free alanine gets transported to the liver, where its conversion into pyruvate provides a substrate for aerobic metabolism. However, in the presence of adequate carbohydrates, your body already produces pyruvate during glycolysis. Alanine’s main role instead is to make proteins for various functions within the body. If you eat meat, you’re probably getting enough of it through your diet. Even vegans and vegetarians get alanine from whole grains, legumes, and rice. So unless you’re a hypoglycemic vegan on a super low-carb diet, l-alanine supplementation isn’t going to do much.

Glutamine is the most abundant amino acid within the body. It’s so important, however, that it becomes conditionally essential during times of high stress or illness. By carrying nitrogen and enhancing insulin, it assists muscle growth and refills glycogen stores. Your immune system relies on glutamine to produce white blood cells and limit immunosuppression. As such, it’s known as one of the best amino acids to have in your bloodstream during an intense session.

The most infamous compound in green tea, epicatechin is a natural antioxidant. It’s been shown in research to disrupt pathways that mark inflammation. Collect enough of these compounds, and you can reduce pain. Some studies show the antioxidative effects of epicatechin enhance nitric oxide. Killer Labz claims this ingredient “supports significant increases in size and strength”, but take that with a grain of salt. While epicatechin is a brilliant antioxidant that can help minimize the damage from tough training, only a few proof-of-concept studies exist in humans.

However, it’s widely considered non-toxic, so it’s a promising ingredient to watch. We’d like to see more in regards to dosing, population, and specific exercise modality as it relates to catechin and muscle strength. Especially in this supplement, where a proprietary blend masks the specifics.

5a-hydroxy-laxogenin hails from a shrub known as Smilax Sieboldii, and it’s a phytosteroid. As an analog of brassinosteroids, it does basically the same thing steroid hormones do in humans – but for plants. It’s anabolic, helping them to grow and develop naturally.

In mammals, therefore, it has similar effects when taken as a supplement. Laxogenin increases muscle growth and testosterone while lowering cortisol. But it hasn’t been approved by the FDA and will probably make you test positive on a drug test. Furthermore, despite being marketed as natural, most supplements build their products with the synthetic version. As there’s surprisingly little research on effect in humans – either positive or negative – it’s not worth the risk of toxicity.

Black pepper extract comes with a compound called piperine, known to enhance absorption. As Brute NRG shows a 95% piperine content, we can safely say this addition will elevate the effects of other ingredients. Whether that’s a good or bad thing, however, is yet to be determined.

Caffeine is one of the most effective and studied pre-workout ingredients. Anhydrous just means without water, so you’re free to mix it in with your pre-workout. Aside from its obvious effects on energy, caffeine is one of the most evidence-based performance-enhancing supplements on the market. More importantly, it’s legal and generally considered safe with little side effects. Consuming too much caffeine can cause jitters, elevated heart rate, and disrupted sleep. However, studies show that individual variability allows for anywhere from 3-9 mg/kilogram of body weight. For most, 4-6mg/kg provides ideal benefits. At the right amounts, pre-workout caffeine enhances anaerobic power output and stimulates the central nervous system.

As a brand-name version of theacrine, you can bet it’s a top-quality ingredient. Theacrine comes from the leaves of the Camellia assamica plant, which is also used to make tea (hence the name TeaCrine). According to murine studies, theacrine impacts mammals in a similar way to caffeine. It blocks adenosine receptors from accepting adenosine, a compound responsible for sleepiness. In addition to keeping you awake, a study on soccer players showed it specifically enhanced cognitive function and increased time to exhaustion.

If it weren’t for the proprietary blend and the addition of a steroid, we’d be inclined to give this pre-workout a solid B+. Not an A+, as some of its claims are still unsubstantiated. Epicatechin, for example, is a powerful antioxidant, but it’s a bit of a stretch to call it a powerful muscle builder. Alanine, as well, only aids performance if it’s severely lacking. In a large majority of cases, it won’t be. Unfortunately, the whole “not telling us what’s in it” and “maybe failing a drug test” thing kind of ruin that.

As far as the additions for energy, however, we can’t complain. TeaCrine genuinely looks like the real deal, and caffeine has helped people go hard in the gym since the dawn of time. Maybe the base formula is to blame for the deduction in points, but you can’t separate the ingredients.

Bodybuilders, hardcore lifters, and anyone ready to “kill every workout”. Possibly zombies, skeletons, and Jason as well, by the looks of their Instagram. In all seriousness, it’s geared towards those with a no days off mindset.

If you’re an elite athlete, a natural bodybuilder, or anyone subject to drug testing, however, I’d stay away from this one.

Killer Labz NRG will give you a kick in the pants.

The caffeine and TeaCrine provide natural stimulants. BCAAs both stimulate muscle protein synthesis and protect against breakdown, allowing you to go hard and reap the rewards.

However, don’t drink this if you’ve had too much coffee if you have a low tolerance to caffeine.

Any Potential Side Effects for Killer Labz Brute NRG?

Side effects from Killer Labz Brute NRG include:

You can get 30 servings of Killer Labz Brute NRG for just $49.99 on their website.

It’s impossible to know whether Killer Labz NRG will work for you or not. While most of the ingredients are based in science, dosage matters. And by hiding specific amounts, you just can’t say for sure whether it’s effective.

The inclusion of a steroid, despite being “plant-based”, is concerning. If you’re someone who isn’t concerned about steroid use, then this supplement probably runs along the low level of risk.

But for those care more about overall health than their bicep measurements, Killer Labz NRG just doesn’t cut it. Especially since that plant steroid is in a blend with non-disclosed amounts. It’s entirely possible the whole thing is a plant steroid, and that’s just not worth the risk in our honest opinion.