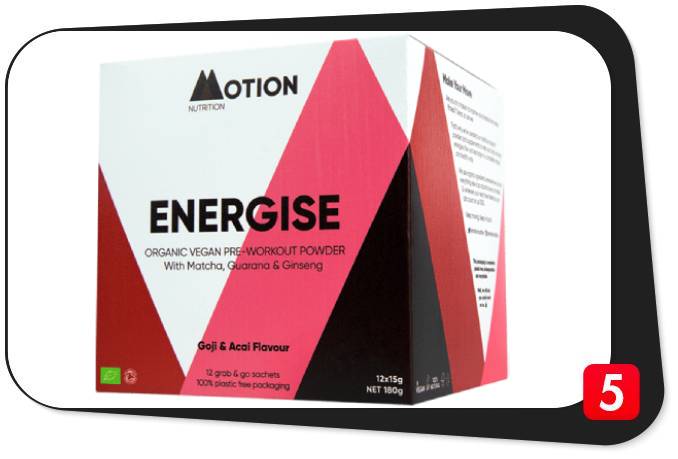 Motion Nutrition are a UK-based company specializing in 100% organic formulas for your favorite supplements, nootropics and protein products.

The company is all about moving with the planet’s natural rhythm and creating supplements that move with your body’s natural rhythm too. If you’ve heard this sort of talk before and are expecting this review to be a bit of a snooze – we’re going to stop you right there.

It is well within the realms of possibility that a socially aware company could take organic plant-based ingredients and create something that can compete with the best pre-workouts on the market. Performance Lab have managed it with their Pre.

We’ll analyse each ingredient and let you know our conclusion by the end of this review.

Like all Motion Nutrition products, Energise uses all natural and organic ingredients.

Energise claims to provide you with natural superpowers that offer short term performance boosts for the gym plus longer term health benefits.

Remember that these are claims, though. Let’s find out whether this pre-workout can deliver on these promises…

The full ingredients list for Energise is shown in a picture further below.

You’ll note that we don’t get exact dosages; this is the only real bug bear we have with this product.

We’ll examine the relevant ingredients one by one…

The “Holy Fruit of the Himalayas”. Sea buckthorn grows not in the sea, but up mountains.

Go figure. This powdered holy fruit offers many health benefits due to its impressive amount of active ingredients.

It can improve circulation, reduce oxidative damage and inhibit the ageing process. Sea buckthorn also provides many of your essential vitamins, minerals and other nutrients including folate, healthy fats and the full range of omega fatty acids.

You’d be hard pressed to say that it’s an obvious pre-workout ingredient, but it certainly promotes good overall health for body, heart and brain.

Lucuma is the fruit of the Pouteria lucuma tree which is native to South America. It has been used in traditional medicine in that part of the world for centuries. It can be used in place of sugar as a natural sweetener, and it is more nutritious than sugar.

You could argue that it’s just here to improve the taste of Energise…in our honest opinion.

In a pre-workout context, this means your body will sustain less lasting damage as a result of your increased workout intensity.

Beetroots are incredibly nutritious and can help lower your cholesterol and blood pressure. It has become more popular recently thanks to more studies being done to discover other potential benefits.

One of these extra benefits makes beetroot a great addition to this pre-workout. Beetroot is a rich source of nitrates, which increase your nitric oxide levels and can improve exercise performance.

However, if you’re cynical, you’d believe some supplement companies include beetroot powder in their pre-workouts as a natural colorant.

Carob doesn’t look too appetizing on the surface. If you saw it in its raw form, you might think someone left a pod of peas out in the sun for about a year. Underneath though, it’s a superfood that dates back to the ancient Greeks.

Containing polyphenols and other antioxidants, carob is also a rich source of dietary fiber and protein. It is used as a substitute for chocolate due to its sweet taste and the fact that it contains almost no fat. As well as containing no fat, carob can actually help you lose fat.

OK, so far you may have been thinking that Energise doesn’t sound like much of a pre-workout. The ingredients so far are beneficial to your general health, sure, but this doesn’t necessarily improve your performance in the gym.

As a result, we don’t believe that it’s a necessary addition to Motion Nutrition Energise pre-workout.

Maca has skyrocketed in popularity in recent years, and for good reason. It’s popular in T-boosters but has solid credentials – not so much as a pre-workout, though…

It would certainly have a place if Motion Nutrition Energise was a t-booster and not a pre-workout supplement. Just our honest opinion.

This is everywhere these days. Matcha lattes are available in every coffee shop and recipes for cakes, cookies and even frozen treats can be found online.

There’s a good reason for this– matcha is very beneficial as a ‘fat burner‘.

It also contains smaller amounts of caffeine than ‘caffeine anhydrous’.

The problem with caffeine is that you can crash hard when it wears off. Not the case if you also take l-theanine though, which provides a more sustained boost in energy that lessens the effect of caffeine wearing off.

The bad news is that Motion Nutrition Energise doesn’t contain any l-theanine.

From deep within the Amazon rainforest comes guarana, another hugely popular ingredient across the sports nutrition market. Guarana has a high antioxidant concentration, similar to that of green tea, and is known to prevent oxidative damage in humans.

It’s also a good source of caffeine and, like caffeine, has been shown to increase energy and improve mental focus. The general consensus is that guarana is safer and carries fewer side-effects than coffee – but in reality it’s not going to make that much of a difference in a supplement.

This variety of ginseng is widely believed to promote a feeling of invigoration, making it a great way to round out the Energise formula. Another rich source of antioxidants, panax ginseng can help to reduce inflammation and prevent damage to cells. 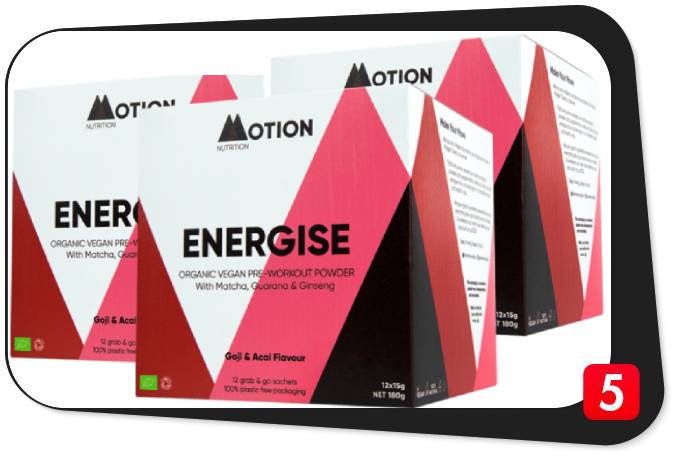 Energise offers a well-balanced formula made up of carefully selected ingredients. Because it’s a proprietary blend, we can’t be sure exactly how well balanced it is, but what is certain is that Energise sits nicely between high-stim formulas and the raft of gentler, stim-free organic pre-workouts.

The meat of the formula comes from the guarana, matcha green tea and maca. These aren’t commonly what you would associate with a pre-workout supplement and we’re unsure whether they would offer those ‘quick’ benefits that you want from these kinds of products.

Proprietary Blends are not a good thing…

We would hazard a guess that the caffeine content is in the 150-250mg range, though we’d much rather know for sure. We’re not fans of proprietary blends for exactly this reason.

Basically, proprietary blends don’t offer the individual dosages of ingredients on the supplement facts label. So you literally have no idea how much of each ingredient is contained in Motion Nutrition Energise.

It’s also an issue because certain ingredients are shown to only work in certain dosages. As well as stimulants like guarana being able to cause jittery side effects when consumed in large dosages.

As a result, the proprietary blend method used for Motion Nutrition Energise gets a firm ‘no’ from us.

Motion Nutrition have packed a great many benefits into Energise. Let’s start with the obvious – it does fight fatigue and energize you due to the inclusion of guarana.

However, as we mentioned, it might contain ‘too much’ guarana, which would cause the opposite effect (jittery side effects). No-one knows due to it being contained in a proprietary blend.

It boasts a strong stim profile that elevates your body and mind – which brings us on to the second biggest benefit of Energise, cognitive performance.

Of course, no one is studying particle physics or figuring out a cure for cancer while they work out, but the mental sharpening effects of Energise will undoubtedly benefit your workout in other ways. The greater focus you have on each contraction and your consistent concentration through set after set will result in a more thorough and ultimately effective workout.

Then we have the more general health benefits associated with Energise. Antioxidants are useful as an insurance policy against serious muscle damage, but benefit your entire body as well.

They are strongly linked to a decreased risk of inflammatory diseases and better overall health.

Energise does have appeal and will be particularly attractive to anyone looking for a plant-based pre-workout. Just bear in mind that our #1 pre-workout tried-and-tested is also vegan-friendly.

The ingredients are 100% organic and the packaging is completely plastic-free, making Energise one of the most environmentally friendly supplements available.

Even if you’re not specifically looking for something plant-based or environmentally friendly, we recommend Energise as a well-balanced supplement that packs a stim punch that won’t leave you climbing the walls or grappling with anxiety.

It’s difficult to emphatically say there are no risks with this product when you’re not given the exact dosages of ingredients. If, as we suspect, the caffeine level is actually low-medium, then Energise is probably low risk.

If you’re extremely sensitive to caffeine, however, you might want to opt for a stim-free pre-workout anyway – such as another one of our favorites, Performance Lab SPORT Pre.

Energise is available via the Motion Nutrition website and at the time of writing prices are as follows;

You can also pick it up on Amazon and a range of other websites so it’s worth shopping around for deals. Expect to pay on average about £19-20 for 12 sachets. This is not as cheap as some of the lower end pre-workouts (or indeed some of the bigger names) but it’s not as expensive as the top end of the market either. We think it’s worth the investment.

Motion Nutrition have shown themselves to be ahead of the curve on this with regards to plant-based formulas, so we can respect the company from this point of view.

However, you simply can’t ignore that all of its ingredients are hidden within a proprietary blend.

Companies can give excuses such as ‘they want to keep the formula secret’ etc. But at the end of the day, they should be putting their customers safety first – at least by providing the exact dosages of stimulants in each product.

As a result, we don’t believe that it beats our #1 pre-workout this year (that is also vegan-friendly and 100% natural).