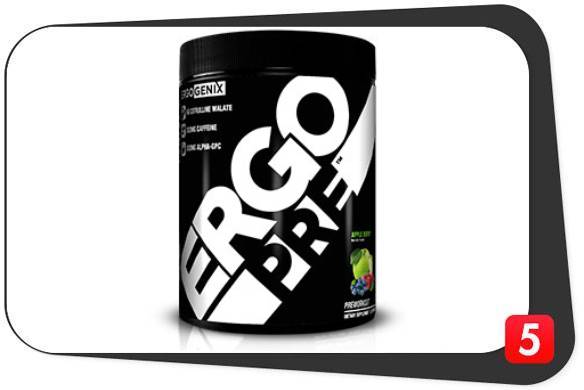 Pre-workout supplements are not new, but they’ve come quite a way from simply knocking back an espresso before going for a run or hitting the gym.

Now, any good pre-workout aims to boost blood flow, endurance, focus and performance so you can get the most out of your workout. Many use the addition of BCAAs to fuel muscles and kickstart them into building.

The best pre-workouts do all the above using a small list of curated ingredients that work in sync. Doubling down on the targeted parts and processes in your body that influence performance, endurance, focus and recovery down independent pathways to maximize their effect.

Is this what Ergo have created? Let’s investigate…

On the outset, ErgoPRE looks to be advertised as a modern pre-workout with a lean toward nootropics.

Nootropics are substances, in this case supplements, that enhance cognitive functions like memory and focus. But they have a broad spectrum of effects with varying degrees of success.

We’ll break down how ErgoGenix have approached this and if it works out for them. ErgoPRE only comes in one flavor though, so I hope you like Apple Berry (whatever that is). Their focus for ErgoPRE is…

So far, I’m impressed, they’ve set some realistic and desirable goals. Let’s take a glance at the ingredients and see if this is reflected on the label.

A pretty small list which is a good sign and no proprietary blend in sight. There’s more of a focus on nootropics than suggested by their three aims, and that is a hefty dose of caffeine.

There are quite a few extraneous ingredients. I call them this because they won’t particularly affect the overall functionality of the supplement, though the B vitamins may help strengthen the nootropic side. B12 especially due to reports of mood boosting in those with deficiencies and its role in neurology.

Interesting so far, so let’s jump into the ingredients breakdown and see what’s really going on.

Citrulline malate is the amino acid L-citrulline bonded with malate, a salt of malic acid which is essential in the Krebs cycle of producing energy. See why it might be of interest?

Although malic acid might seem attractive with its potential of aiding in energy production, there is insufficient evidence to suggest this. But, malate can act as an acid buffer and reduce fatigue during intense exercise.

Raising NO levels dilates the blood vessels and is responsible for the enhanced ‘pump’ you feel when taking a good pre-workout and lifting. This increased blood flow elevates the amount of nutrients, including oxygen, that can reach the muscles.

Ergo have hit us with a decent 6g of citrulline malate. I’d loved to have seen more, as technically there’s a quarter less citrulline in citrulline malate than just citrulline alone, especially as this is the only NO booster in the stack. But it’s not bad at all.

This is a little disappointing to see as the first “nootropic” ingredient simply because there isn’t much evidence to show that it’s effective at boosting cognitive function in humans. In rats, it’s seen as moderately effective, but in studies with humans… it just doesn’t cross the blood brain barrier.

The other downside is that once consumed, it can lead to a fishy odor on your skin and breath.

N-Acetyl L-Tyrosine also known as NALT, is a stable, water-soluble form for the amino acid L-tyrosine. When consumed the body converts it to L-tyrosine which stimulates the production of noradrenaline and dopamine, and has been linked to boosted cognition, reduced stress and elevated wellbeing. This makes L-tyrosine a powerful ingredient for focus and anti-mental fatigue during intense workouts.

There’s a lot of debate over the efficacy of NALT, and there are many claims that NALT is superior to L-tyrosine on its own, but recent research suggests this is false. NALT relies on the body converting it into L-tyrosine in order for the benefits to take effect, studies have shown that this appears to be limited: only elevating L-tyrosine levels up by 20% regardless of NALT dosage.

Whereas there are numerous studies showing that only 100mg of L-tyrosine can elevate blood concentration of L-tyrosine by 200%, 223%, 276%. On top of this, NALT has also show to be far less effective at crossing the blood brain barrier than L-tyrosine.

I’m not sure why Ergo went with NALT as the evidence is clear it’s inferior to its child compound, L-tyrosine. That said, a lot of other supplements do it too, probably because for a while, NALT was considered the premium version. My first guess is that NALT is cheaper and more stable, not to mention more soluble in water.

Glutamine is a bugbear of mine. Claims that it can boost or kickstart muscle protein synthesis are unfounded, but in this case… I’m actually okay with it.

Glutamine is an amino acid that only seems to be of benefit to people who’re otherwise lacking in sources of protein like vegans and vegetarians. But in the instance of using glutamine in a pre-workout, it’s to provide muscles with an energy source during intense exercise. But there is limited evidence to support this.

Rather than glutamine, including a quality BCAA dose in here would be far, far superior in every regard.

Where choline bitartrate simply doesn’t work, Alpha GPC does. It is able to effect both the body and the brain.

When consumed, it is converted into phosphatidylcholine which then stimulates the production of acetylcholine. Acetylcholine is a neurotransmitter and is linked with cognitive enhancement. However, this is only seen in rats. But it is still a promising ingredient in humans, shown to reduce the rate of cognitive decline in the elderly, and reduce the symptoms of Alzheimer’s.

However, interestingly it has been linked with increased power output due to its ability to elevate the levels of growth hormone. Unfortunately, this was only with high doses of 600mg, and Ergo provide us with only 300mg. Half of which is from a premium supplier, the other half is not. (Not sure why).

An age-old and obvious ingredient, but not a bad one. Caffeine, as we all know, is a stimulant. It has a plethora of benefits to performance in the gym and out, including power output, aerobic exercise performance, and focus. It can even kickstart fat burning. But there are two big downsides.

These two reasons are why stimulant-free pre-workouts are becoming more popular on the higher end of the market. This is not to say I’m against caffeine in pre-workout, not at all, it’s safe and highly effective when used properly. However, ErgoGenix have piled in 300mg of caffeine into ErgoPRE, which is a lot considering the FDA recommend a limit of 400mg.

Piperine, also known as black pepper extract, is a great ingredient and one that shows a manufacturer wants you to get the best out of the ingredients. What it does is known as the enterohepatic effect, where it effectively protects the other ingredients it’s consumed with by boosting intestinal absorption and inhibiting enzymes and other complexes from breaking down those ingredients.

This effectively raises the concentration of the ingredients in the body to levels that would not be possible otherwise. 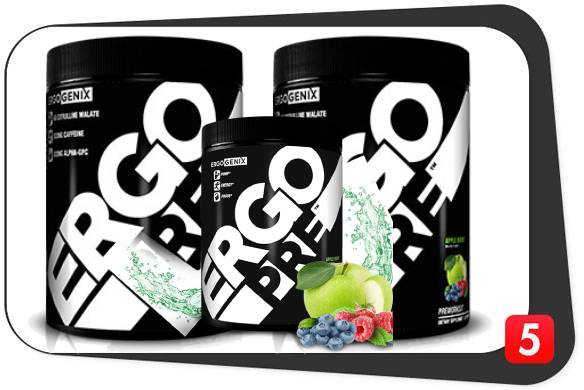 It just so happens that these three ingredients tick off our three goals: pump, focus, and energy. But at this stage it’s worth bearing in mind that this pre workout is $29.99, so it’s knocking on the door of premium brands. With this in mind, along with the criticisms above of each of these ingredients, it’s really not satisfactory for the money.

Sure, citrulline malate is a quality supplement that will boost NO concentration, helping you achieve a pump as well as acting as an acid buffer (and the 6g dose is pretty good).

Vitamins B6 and B12, however, do add additional cognitive benefits, not least because B6 is crucial for the creation of the neurotransmitters, serotonin, dopamine, GABA, epinephrine, norepinephrine, and melatonin. Even a slight B6 deficiency can negatively impact sleep, behavior, hormone secretion and more. Of course, we don’t know the dosages of B6 and B12, but both are highly effective in very small doses.

Caffeine is a prolific ingredient in pre-workouts and fat burners, but it’s limited by tolerance and will lead to a big crash. But its benefits are rocks solid as long as you’re not tolerant. However, its huge dose does feel like a cut corner to delivering a buzz that overrides any other possible cognitive benefit.

The other ingredients and their dosages –  choline bitartrate and glutamine – don’t bring much more to the table.

Bioperine is a premium ingredient from a trusted brand, but it’s used here as it is in many other poor formulas, as a sticking plaster.

ErgoPRE is aimed at anyone looking for an energy boost for their workouts. The high caffeine content means it’s not suitable for anyone with caffeine sensitivities or other illnesses such as heart conditions.

There is a lot of caffeine in this product, you will probably get the jitters after the buzz wears off. Choline bitartrate has also been anecdotally reported to produce a fishy smell from the skin and mouth.

At the core of ErgoPRE is the skeleton of a decent pre-workout. It provides a solid dose of citrulline malate and a big hit of caffeine, but the majority of the ingredients fail to deliver. If this product was half the price, I would call it worth the money, because these fundamentals will help.

Using NALT instead of L-tyrosine pulls this product down, and where it begins with a promise of strengthening mind-muscle connection and boosting cognitive function, its headline nootropics have mild potential at best. Vitamins B6 and B12 at least offer some additional benefit.

While glutamine is included, at this price I would expect to see fermented BCAAs and/or creatine, and/or beta-alanine as well.

ErgoPRE will give you a pump and caffeine kick, and if that’s what you’re looking for then go for it, but there are far more effective products out there at the price.