You are here: Home / Pre-Workout / 4 Gauge Review – Shotgun-Shell-Shaped Pre-Workout Guaranteed to Blow You Away 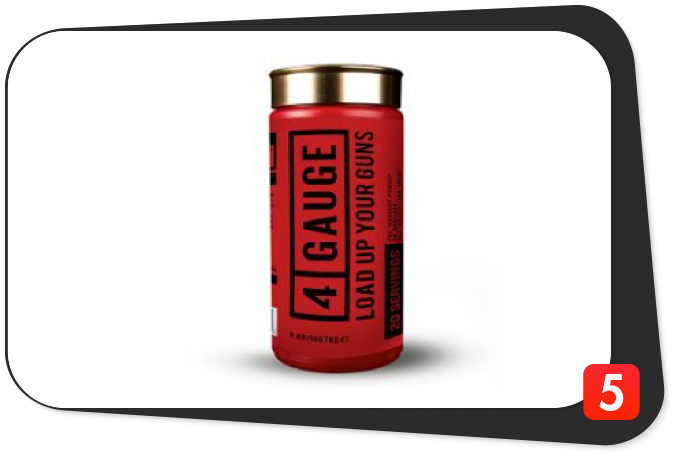 If you’ve been taking pre-workout supplements for quite some time, we bet you’ve seen it all.

However, have you stumbled upon a pre-workout container shaped like a shotgun shell?

We bet you haven’t.

Enter 4 Gauge – a potent pre-workout supplement launched by the Roar Ambition brand in 2017 whose bottle does the talking.

We are confident this product and review will blow you away.

4 Gauge is billed as the safest and strongest pre-workout supplement on the market, as well as a game-changing 4-in-1 formula. Supplement notes:

Load Up Your Guns

There are several reasons you need a good pre-workout formula.

When you work out at the crack of dawn, it helps you focus and perform.

If you prefer lifting after a hard day’s work, you may need a quick pick-me-up beforehand.

Maybe you’re all set to conquer your personal records in your deadlift or squats. A pre-workout can help you make the transition to beast mode.

Whatever the case may be, 4 Gauge is an innovative new pre-workout formula (launched in 2017) to add to your gym training supplement stack.

Take a hint from the name and the appearance, folks: this pre-workout supplement takes the shape of a shotgun shell.

It’s one of the most fascinating pre-workout supplement containers we’ve seen in 2017, or really, ever.

We’re guessing the outside appearance is a giveaway of what 4 Gauge pre-workout can do for you. 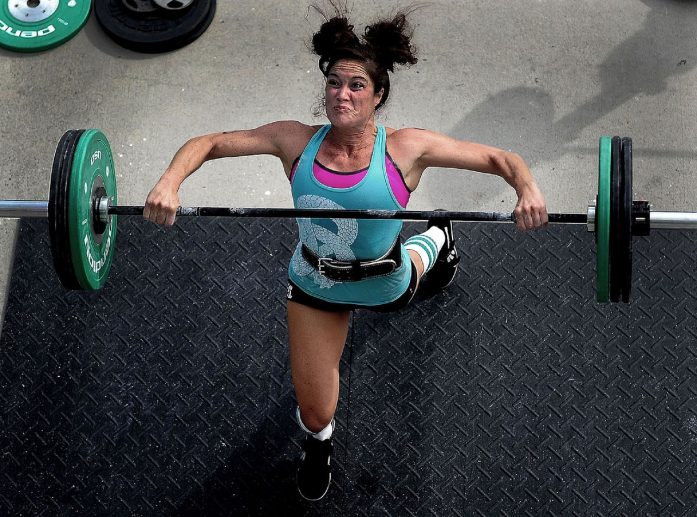 We like it. That’s are what you want in a pre-workout supplement: More kick, pump and power without the jitters and side effects.

On that note, 4 Gauge pre-workout “enhances every aspect of what makes a workout great: raw strength, long-lasting energy, and intense muscle pumps,” per its website.

The supplement manufacturer points out that one’s career and life can get in the way of a solid training session at the gym… which is why they’ve packed 4 Gauge full of cognitive enhancers, in addition to classic physical performance enhancers.

This observation is spot on. Let’s keep it real, folks: sometimes life can wear you out and drain your fitness ambition. You’re already on fumes by the time you set foot inside your gym.

Get this: the folks at 4Gauge say their supplement is designed not just as an every day go-to, but as a long-term solution for tapping into your full potential.

If 4 Gauge is the game-changing pre-workout supplement for 2017 that it claims to be, we’ll take it.

This supplement has no proprietary blends and artificial sweeteners. That made a good first impression on us – we’ve seen far too many pre-workout supplements without precise ingredient amounts and sweeteners such as sucralose.

The manufacturer says all 4Gauge ingredients are natural and “prepared in FDA- and cGMP-certified facilities.”

The takeaway: this pre-workout product is a breath of fresh air for those who like clean, no-frills supplements.

This watermelon extract is the most effective vasodilator on the market, per 4 Gauge’s official website and many sport nutrition reviews from consumers.

We agree. L-citrulline malate is a nitric oxide precursor. The latter compound is known for several benefits:

We feel six grams of l-citrulline malate per serving will help you feel blood surge through your veins and pump & power up your workout.

Many pre-workout supplement formulas include some form of citrulline. However, 4 Gauge pre-workout takes a commonly used nutrient to a different level.

According to a study published in The Journal of Strength and Conditioning Research in March 2015 (via the U.S. National Library of Medicine’s National Institutes of Health), “Citrulline malate supplementation may be beneficial in improving exercise performance during lower-body multiple-bout resistance exercises in advanced resistance-trained men.”* Oh yeah. It will pump you up.

Next up is one gram of creatine monohydrate per serving.

We’re stoked Roar Ambition included one of the most versatile “pump & power” bodybuilding ingredients in its 4 Gauge pre-workout supplement formula.

Ergo, creatine acts as an energy source before your training session.

One gram per serving ought to suffice for pre-workout supplement purposes.

However, if you need more creatine after a hard workout (for building lean muscle mass and shorten recovery), that’s fine. You can augment with a separate creatine supplement; take a post-workout supplement  with creatine, for example.

Just remember to stick to the recommended daily supplement dosage of five grams.

4 Gauge also has 500 milligrams of acetyl l-carnitine per serving.

The moment you see the “l-carnitine,” you may be thinking of a supplement for fat loss. You’re right, partly.

Acetyl l-carnitine does help you torch fat, but it also helps ward off fatigue, fight cell damage, and enhance focus.

So, if you’re not content with this pre-workout product’s six grams of l-citrulline malate per serving, its additional supplement dose of Beta vulgaris will ensure you get awesome pumps.

Aren’t you glad 4 Gauge has Beta vulgaris? We sure are.

Now, this pre-workout’s 300 milligrams of coconut water per serving is a pleasant surprise.

Some fitness experts maintain it is best consumed as a post-workout supplement to replenish your electrolyte levels.

However, a pre-workout product with coconut water such as 4 Gauge helps increase hydration while restoring electrolytes.

We’re confident it will help you feel more revitalized before your workout.

Roar Ambition dubs this one-two punch “Smart Caffeine” because of its synergy for energy, power, focus and awareness.

That’s because l-theanine boosts levels of the neurotransmitter GABA, which gives your mind and body a soothing and calming effect, taking the edge off caffeine.

We think this is a stroke of genius. L-Theanine+Caffeine is pretty common in nootropic supplements, including a couple of our Best5 Nootropics for 2017 reviews. BUT, l-theanine is missing from many caffeinated pre-workouts. Many supplement manufacturers overlook the possible side effects of caffeine; it is nice to see 4 Gauge is on the ball.

On the other hand, some consumers (especially those who work out at night) say caffeine from their pre-workout supplement keeps them wired for hours.

Not so with 4 Gauge pre-workout – it may have a lethal name, but its caffeine content is the kind which helps you achieve your fitness goals without compromising your lifestyle.

Had it not been for 4 Gauge’s l-theanine content, we would have had a stronger stance against it due to its caffeine content.

We get it, folks: most pre-workout supplement formulas have caffeine. However, if a supplement can jack you up without stimulants (which may have side effects), it would be much better.

4 Gauge pre-workout is the exception to the norm – its “Smart Caffeine” combo works. Try it and see for yourself.

The final key ingredient in this pre-workout supplement is 100 milligrams of Rhodiola rosea powder. Rhodiola is famous as a mental and physical performance-enhancer, used as a legal competitive supplement by world class athletes.

We think it’s an excellent addition to 4 Gauge pre-workout – it’s like icing on the cake, folks. It is also great for gaining an edge in competitive athletic training beyond the gym.

Let’s check out the full list of supplement ingredients:

The manufacturer proudly proclaimed 4 Gauge as “The Safest and Strongest Pre-Workout on the Market” on its official website.

Well, we agree for the most part… and so do many online reviews on other supplement sites.

In our opinion, 4 Gauge is a smartly designed supplement, featuring one of the best pre-workout ingredient combos on the market. It’s right up there with the likes of Old School Labs’ Vintage Blast supplement, another of one our best preworkout supplement reviews for 2017.

Load up with its six grams of l-citrulline Dl-malate per serving, and you will boost your nitric oxide levels for bigger pumps and better blood flow.

Throw in one gram of creatine monohydrate and 300 milligrams of red beet root extract (Beta vulgaris) per serving,  and you will experience a fantastic adrenaline rush before your workout.

It will make you want to hit the weights harder.

The other ingredients in this supplement serve as great complements to the citrulline. Acetyl l-carnitine’s ability to ward off fatigue and mitigate muscle damage work great in conjunction with the creatine content. We also talk about its focus and brain-boosting benefits in some of our nootropic formula reviews.

On the other hand, the Beta vulgaris and coconut water combo help regulate your blood pressure levels.

Don’t forget about the innovative “Smart Caffeine” combo of caffeine and l-theanine we mentioned earlier. 4 Gauge is one of the few pre-workouts on the market whose caffeine content produces minimum side effects.

That’s saying something about this product — the formulators know what they are doing.

Here’s the major takeaway, folks: it’s evident 4 Gauge’s preworkout ingredients work synergistically to give you the edge you need for your workouts.

The manufacturer says all-natural without the shady proprietary blends is the way to go. Of course, we agree… if you read Best5, you know we always rip on prop blends in our reviews and our Buying Guide.

With that, we give the 4 Gauge supplement manufacturer strong reviews for its transparency.

Other pluses: this product is low in calories, carbs, and sodium.

For the most part, 4 Gauge is a safe pre-workout supplement.

However, the inclusion of sugar alcohols such as Xylitol and Erythritol doesn’t sit well with us.

For instance, the latter may produce diarrhea and headaches if taken in large amounts.

In any case, we have mixed feelings about the inclusion of sugar alcohols in bodybuilding preworkout supplements.

Good thing 4Gauge has monk fruit extract (also known as Lo Han Guo extract), a natural sweetener that is trending in 2017, which helps ward off free radicals and inflammation.

If only Roar Ambition used monk fruit extract or stevia exclusively in 4 Gauge, that would have been great.

Ouch. But, we don’t see many reviews complaining about price, which suggests the expense may be worth it.

Roar Ambition 4 Gauge has the following supplement benefits, per its website:

We agree with most of these claims. 4 Gauge is one potent preworkout supplement which can help you achieve your fitness goals and then some.

Because of its caffeine content, we deem 4 Gauge as best suited for healthy and active individuals who are at least 18 years of age. Online reviews seem to trend towards a younger “hardcore” demographic taking it.

4 Gauge probably won’t produce the side effects other pre-workout supplement formulas that use caffeine do because of its l-theanine content.

However, the inclusion of sugar alcohols such as Xylitol and Erythritol have received mixed reviews from experts. Some even maintain they may produce side effects (such as headaches and diarrhea) when taken in large amounts.

Nonetheless, if you feel doubtful about any of 4 Gauge’s ingredients and their impact on your health, please consult with your physician before you buy it.

So, is Roar Ambition 4Gauge the potent pre-workout supplement it claims to be?

Our conclusion: Yes, it is. In fact, 4 Gauge is one of our top preworkout reviews for 2017.

We found its ingredient combo and its synergistic effects impressive, to say the least.

Besides, can you name another pre-workout supplement with a Smart Caffeine combo such as this one?

We guarantee this product will help take your workouts to the next level.

If only the manufacturer can come up with a cheaper advanced supplement formula without the sugar alcohols, we would be stoked even more.