Pre-workout supplements are sort of unique within the supplement world as they tend to gain an odd sort of fame (or notoriety) among users. Most people in the fitness world will have heard of Jack3D, the pre-workout that was banned for being too powerful, but there are many pre-workouts that have similar cult followings.

TF7 Labs’ Poison pre-workout was one such product; the incredible skull designed packaging helped it stand out from the crowd visually, and the high-quality ingredients helped it cement itself as one of the most well-known pre-workouts around.

The original Poison pre-workout is no more, and a new version (Poison V2) is now available to buy, but does Poison V2 live up to the high standards of the original? In this article we will delve deep into the ingredients list and look at whether Poison V2 delivers on its claims and lives up to the reputation of the previous incarnation.

About Poison V2 by TF7 Labs

TF7 Labs is a tricky company to get to grips with: there’s little information around, it doesn’t currently appear to have its own website (even though marketing mentions one, all links lead to error messages), and even its own social media Facebook page hasn’t been updated since April (2019).

You can also find a couple of negative reviews of its customer service and delivery on said Facebook page, without any response at all from the company. All of which is a red flag to us.

That said, the company seems to prefer to allow its products to do the talking – though improved customer service certainly wouldn’t go amiss – and its product are sold through several different reputable outlets, including Amazon UK.

Here’s what we do know…

TF7 labs is a UK supplement company based in Staffordshire. It has been around since 2016 and its main product is Poison V2 pre-workout.

TF7 labs don’t have the largest range of supplements, other than Poison V2, they sell an amino acid supplement and a fat burner. That’s about it but having a small range of supplements isn’t necessarily a bad thing. It allows you to concentrate on maintaining a high quality of product.

The product itself promises to provide “skin-tearing pumps” (hyperbole if ever we heard it), improved endurance, performance, increased focus, as well as strength and power upgrades.

Before reviewing V2 though we really need to mention the original. Firstly, Poison (V1) came in the absolute coolest packaging we’ve ever seen. A glass skull with a cork bottle top, it really reminded you of a fancy tequila or vodka.

The current Poison V2 comes in a cheap plastic bottle. It still has a skull shape, but it is nowhere near as impressive.

The ingredients list changed too, with a reduction in caffeine, a reduction in taurine, and the removal of higenamine. This last ingredient is most likely the reason for the remade formula. Higenamine is a naturally occurring compound that has surprisingly been banned by certain sporting organizations (though not all) because of its stimulant properties. It is banned by WADA though is not present on their list of banned substances – which is probably why TF7 Labs originally used it but have now removed it.

Please bear this in mind if you are an athlete and you have somehow got hold of the original formula!

As you can see, the original was a more powerful pre-workout, but also a more dangerous one. Many of the complaints about V2 stem from this, but to be fair to TF7 Labs, we will judge V2 on its own merits rather than comparing it to the original.

We will be basing our review on two scoop serving sizes because … well … we’ve never seen someone who just uses a single scoop in their pre-workout!

You can either take one or two scoops, mixed with 600ml of water and taken about 20 minutes before a workout. Unlike most supplement companies they do not mention starting with a lower dosage for the first few uses but this would be a good idea. 350mg of caffeine is quite high, particularly for people with a low tolerance for caffeine.

There are eight ingredients contained within Poison V2 pre-workout, but the main ones are citrulline malate, beta alanine, AKG, taurine, and caffeine.

L Citrulline Malate is a very popular pre-workout ingredient for several reasons. Studies have shown that taking citrulline can help to significantly reduce fatigue. A 2002 study by Bendahan et al found that taking citrulline malate led to a reduction in fatigue and an increase in creatine phosphate re-synthesis (basically energy recycling) [1].

A 2010 study in the Journal of Strength & Conditioning found that not only did citrulline malate improve athlete performance (making it a great choice for any sports men and women out there) but it also helped to reduce muscle soreness post-workout [2]. There may also be an improvement in growth hormone production which is essential for muscle and strength gains as well as recovery.

As you can see, L Citrulline Malate is a fantastic pre-workout ingredient, it can help to increase your training volume, reduce fatigue, and reduce muscle soreness post-workout. The dosage is a little bit low; you ideally want to be taking between 6g and 8g before a workout, but 4g is still a decent amount.

Beta alanine is like citrulline malate in that it can increase muscular endurance and banish fatigue. It may also have a small effect on fat loss, but this is most likely due to its ability to increase the amount of exercise you can perform in a workout (which burns more calories and therefore increases calorie deficit).

By allowing you to train harder for longer, beta alanine can lead to fat loss and an increase in lean muscle mass, which can therefore improve your body composition. A 2011 study by Brisola et al found that water polo players who supplemented with beta alanine saw a marked improvement in their physiques [3]. The dosage for beta alanine is spot on, with the recommended dosage being between 2g and 5g.

A uncommon supplement ingredient, AKG is added to pre-workouts because it is believed to improve athletic performance. A 2012 study found a small improvement in training tolerance in untrained young adults [4], but there isn’t much evidence outside of this study. AKG doesn’t appear to have any side effects, so there is no reason not to include it other than the fact that it may not work.

A common supplement ingredient, taurine is often added to pre-workout supplements due to its ability to increase blood flow. Not only is taurine excellent at increasing blood flow (which is essential for a good muscle pump) but it doesn’t appear to increase blood pressure, which is ideal. 500mg is an ideal dosage of taurine.

Let’s be clear, caffeine is the main active ingredient in Poison V2. Beta alanine is good, taurine is okay, citrulline is decent, but caffeine is going to provide the biggest difference. TF7 Labs are aware of this and have added a ton of caffeine to their supplement.

Sure, if you only have one scoop then you’re looking at a modest dosage of just 175mg (less than a double espresso). But as 90% of people would take two scoops, you’re looking at 350mg per serving. Which is very high.

There are reasons for this; caffeine is amazing at banishing fatigue, improving physical performance, improving cognitive performance (focus), improving your mood (particularly in new users), and reducing the perception of pain – which can help you to train harder and for longer.

High doses of caffeine can lead to numerous side effects however, and there is a reason why most pre-workouts shy away from this. That said, during scientific studies the accepted dosage of caffeine is around 500mg or more for sporting performance improvements (though other experts recommend no more than 400mg a day), so Poison V2 appears to be compromising here. Watch your other caffeine sources while taking this supplement.

There appear to have been a few tweaks to the formula of V2 in the past year or so, with some of the V2 pre-workouts containing creatine monohydrate and some of them containing l-theanine. However, most of the Poison V2 pre-workouts we found (mostly on Amazon) contained the ingredients list we mentioned above.

L-theanine would be a fantastic addition to this supplement as it can nullify some of the side effects associated with high caffeine intake. Creatine monohydrate is another good pre-workout ingredient, though it is not time-sensitive and may benefit from being taken separately.

It should also be noted that the Poison V2 pre -workouts that contained l-theanine also had lower caffeine contents.

The different variations are confusing, and it would be useful to have an official manufacturer’s website to refer to, which – of course – we don’t have here. 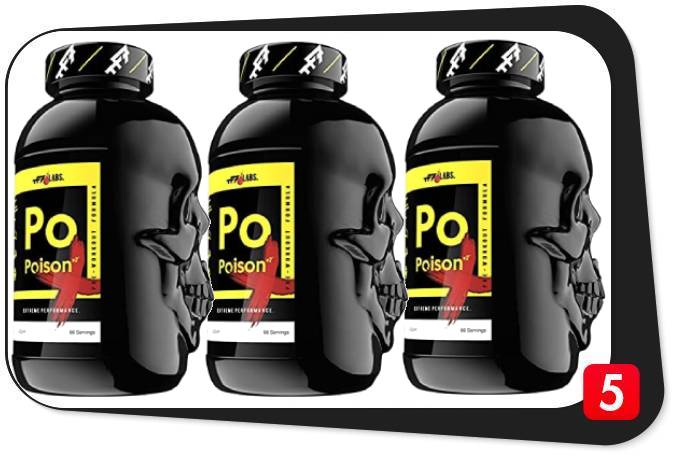 There is no specified audience for Poison V2, though by the looks of the packaging and the ridiculously high caffeine levels we can assume that young males are the target.

There are going to be side effects to taking that much caffeine. Nausea could be one of them, headaches, dizziness, heart palpitations are possible. Insomnia is also a common side effect of caffeine intake (particularly high caffeine doses) as it can stay in your system for several hours after ingestion. Do not take Poison V2 after 6pm if you want to be asleep by midnight!

Beta alanine can also cause side effects, a harmless (though decidedly irritating) tingling sensation on your skin known as paresthesia. This can be avoided using higher quality beta-alanine, but it is understandable why companies don’t bother as it is harmless.

TF7 Labs Poison V2 Price and Where to Buy

As we mentioned earlier, there seem to be quite a few different versions of Poison V2 floating about. Amazon has the version that we are reviewing, while you can find alternatives across the web. You can purchase 33 servings/66 servings (depending on 1 or 2 scoops) for £30 on Amazon (around $40) which works out at less than £1 per serving, or 50p per scoop.

Poison V2 by TF7 labs is NOT a bad pre-workout by any stretch of the imagination, it just doesn’t offer us anything we haven’t seen before. We get the impression that V1 was a bold and powerful product which got a lot of attention, but then (for whatever reason) the company decided to nerf it. Yes, the caffeine content is high, but that’s about it.

There aren’t any clever ingredients here, and the ingredients that have been used, while effective, don’t appear to be premium quality. There’s nothing intrinsically wrong with that, for every £700 bottle of vintage merlot, there’s the £12 bottle of red you grab from your newsagents. That’s where Poison V2 stands.

It’s a nice, cheap and cheerful pre-workout that doesn’t have enough stim for the true stim junkies out there, any may have too much caffeine for the regular gym goer who just wants to feel a little buzz before they start. Poison V2 will provide you with a great workout experience, but we expect TF7 labs to up their game for version 3!

An official website and/ or updated social media (the notion that you can contact the company) would go some way to addressing apparent customer service issues too.