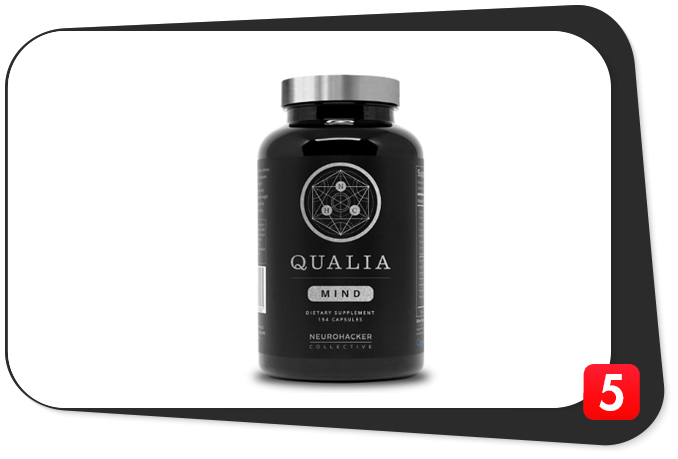 First things first, this is the Qualia Mind review, not our Qualia review.

And there’s a significant difference between these reviews.

Something like 12+ ingredients’ worth of a difference, as well as a price drop, formula drop, and banned substances drop. In a sense Qualia Mind is a significant drop down from the original Qualia stack. However, this “drop down” turns out to be a significant upgrade, improving upon several issues we had with the original stack.

Does Qualia Mind completely remove these issues? Let’s read the Qualia Mind review to find out.

Building upon the original Neurohacker Collective formula (Qualia Original Stack), Qualia Mind delivers more or less the same Qualia experience, except with a cleaner, tighter focus on what seems to work best. Thus, when we say “building upon” what we truly mean is “improving upon by simplification.” It’s a destructive form of creation — i.e., the most fun kind. Formula notes:

By reducing the ingredient count to fewer than 30 ingredients and by removing the more contentious “druggy” items (e.g., Noopept, DHEA), Qualia Mind delivers a nootropic brain health stack that’s not only cleaner than the original Qualia stack but potentially healthier as well. And yet Qualia Mind still has a jacked up ingredient count that’s well beyond your average nootropic supplement.

Is this still an issue with the Qualia Mind formula? Hm… that partially depends on the ingredients. 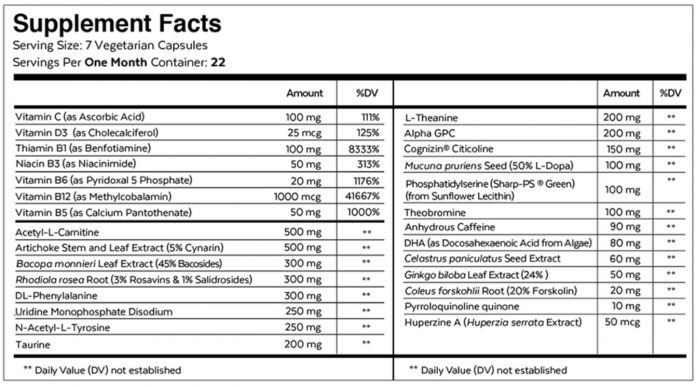 Fortunately, Neurohacker Collective doesn’t mess with any of that proprietary blend nonsense, opting instead to reveal all of their ingredient dosages. And thanks to that massive 7 caps serving size, these dosages all look pretty damn good. But how are the ingredients themselves? Let’s find out:

Acetyl-L-Carnitine – Believed to assist with the transportation of fatty acids to mitochondria, ALCAR is a brain-energizing amino acid and somewhat of a staple in the 2018 manufactured nootropic supplement game. Yet, it only seems to assist with elderly cognition, limiting ALCAR’s value.

Rhodiola Rosea Extract – Another powerful herb, this one properly standardized to 3% rosavins and 1% salidrosides, Rhodiola rosea seems to improve mental and physical performance by strengthening the brain and body’s resistance to stress and fatigue. 300 mg is a phat dosage.

DL-Phenylalanine – Involved in the catecholamine conversion pathway, similar to L-tyrosine, DL-phenylalanine may improve mood levels as they relate to dopamine, norepinephrine, and epinephrine.

N-Acetyl-L-Tyrosine – Involved in the same pathway as DL-phenylalanine, L-tyrosine converts to catecholamine neurotransmitters, which the brain burns during excessively stressful conditions. Qualia Mind did good with the preferred N-Acetyl-L-Tyrosine form of this adaptogenic amino acid.

Taurine – An energy drink favorite, taurine as a standalone ingredient seems to qualify more as a sedative than a bona fide nootropic.

Cognizin® Citicoline – Similar to alpha GPC, citicoline supplies choline for acetylcholine synthesis. However, citicoline has an edge over alpha GPC with its additional supply of cytidine, a precursor compound to nootropic uridine.

L-DOPA is doper than dope.

Mucuna Pruriens Extract (L-Dopa) – Sitting atop our BIG List of T-Boosters for its LH-/FSH-boosting properties, Mucuna pruriens supplies a rich dose of L-Dopa (especially at this 50% extract), which converts to dopamine — the brain’s pleasure-reward chemical. Mm, yummy.

Theobromine – As a vasodilator and diuretic, theobromine may help improve circulation; however, as a nootropic, theobromine’s value is questionable. It’s semi-stimulatory effects are viewed as caffeine-like… but Qualia already supplies caffeine.

Anhydrous Caffeine – See, we weren’t lying: 90 mg of caffeine, which roughly equals a single cup of coffee. Not too shabby, especially with L-theanine on deck to ameliorate Qualia Mind’s caffeine’s jittery side effects.

DHA (Docosahexaenoic Acid) – DHA is a smart choice for brain health and development, yet it’s not the smartest stack option due to its heavy dosage requirements. Given how cheap omega-3 supplements can be, it would’ve been a better idea for Neurohacker Collective to remove DHA and save their precious capsule space. 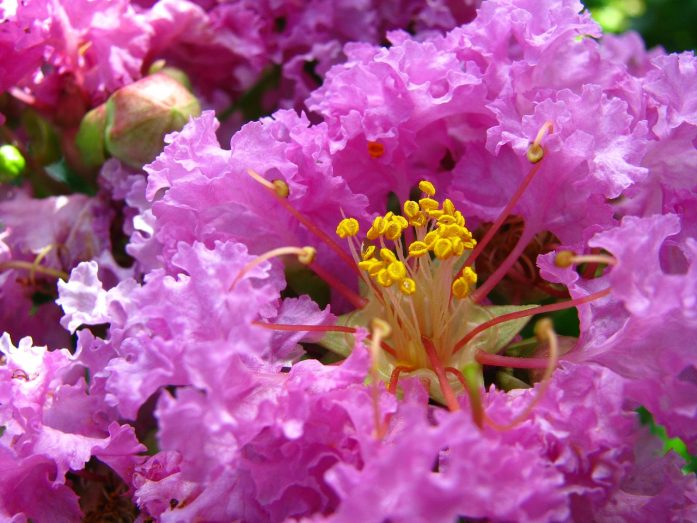 Coleus is so purdy.

The original Qualia Step One, Step Two stacks had more than 40 ingredients combined. Qualia Mind, on the other hand, narrows that number down to 28. And this, we believe, makes Qualia Mind the better Qualia option.

Here are two reasons why:

But why are we praising tightness so much? Isn’t Qualia Mind’s comprehensive approach towards optimized brain health also praiseworthy.

Yes, it’s awesome. In fact, if Qualia Mind works for you, odds are you won’t need to invest in any other nootropic supplements. And what’s even cooler about that is that you’re given the option with Qualia Mind to individually stack the contentious nootropics unique to the original Qualia formula (e.g., Noopept) on the side, whereas the original formula doesn’t allow such freedom.

While both Qualia and Qualia Mind showcase high quality, highly dosed nootropics in their formulas, Qualia Mind comes across as the better option. Even if Qualia Mind still possesses similar Qualia issues: ingredient count, expensive pricing — it seems Neurohacker Collective is moving in the right direction with this stack.

On the Neurohacker Collective website, the following benefit claims are made:

Qualia Mind was reportedly designed with the intention to give “your brain and body the nutrients they need to do more and be more.” The word choice of “nutrients” suggests to us that Qualia Mind operates simultaneously as a cognitive enhancer and a brain nourisher, sharpening both short- and long-term measures of mental health. Qualia Mind has several positive customer reviews, which validate much of these claims …however, they’re all customer reviews featured on the Neurohacker Collective website. 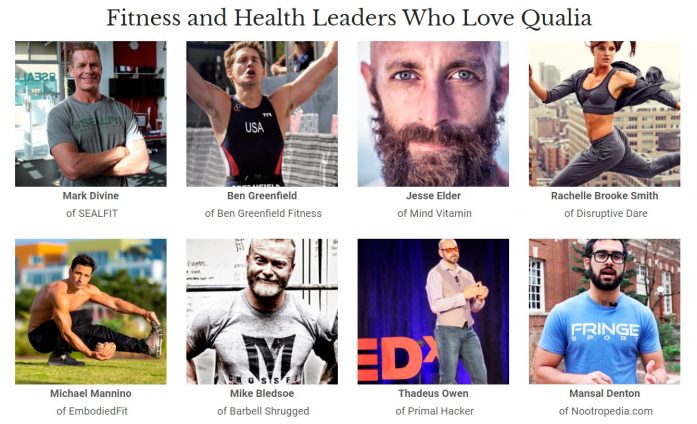 None reported nor do we necessarily expect any major adverse effects with these natural ingredients. Having said that, the number of ingredients contained in those capsules does bring up negative ingredient interaction concerns. As far as we’ve seen, Qualia Mind seems to be in the clear here, but it’s still perhaps worth mentioning.

If you buy Qualia Mind through the Neurohacker Collective website, you’ll find the Single Order and Subscription pricing options. Signing up for the autoshipment “Subscription” option will save you $50 on your first shipment — after which each month’s savings reduce to $20 per month. Bear in mind that you’re only receiving 22 days’ worth of servings per bottle, which may last for a month, if you only consume one Qualia Mind serving daily during the 5-day work week.

If the price and wild formula design were deal-breakers for you with regards to the original Qualia stack, we’re not entirely confident that Qualia Mind has completely erased those issues for you. Yet, if you were just on the fence for the original stack, then yes — Qualia Mind seems to have figured its shit out. While it still remains as one of the (way) more expensive options on the market, Qualia Mind seems to work. And that’s saying (way) more than what most nootropic supplements can claim. (At least truthfully.)