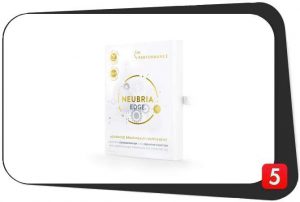 A Focus-Enhancing Nootropic Jam-Packed with Science, but is it really The Last Nootropic You’ll Ever Need?

Things are really starting to heat up in the nootropics field. The global market value of nootropics in 2018 was a little over $2bn.

This is rising and expected to hit $5bn in the next 2-3 years.

If that happens, nootropics will be responsible for 10% of the global health supplement market.

Because of this, you can guarantee that every supplement company out there will be pouring money into researching the best ingredients and cutting-edge technology.

This goes for the established market leaders as well as the inevitable new kids on the block.

Here we’re going to review something from one of the newer kids on the block, Neubria®. Based in the UK having been formed in 2018 by English rugby star Jonny Kennedy.

Jonny wanted to make quality cognitive boosting supplements that people could trust. But can you ever trust a man in such tiny shorts?

We’ll find out today in this review of Neubria Edge Focus.

Edge is one of just four products Neubria® currently sell in the U.S. It’s their version of a nootropic designed to boost focus as well as mental energy and performance.

Their other products are Drift, Charge and Zone which support better sleep, more energy and improved gaming performance respectively.

According to the website, Edge was cooked up “by some of the brightest minds in neuroscience, human performance and nutrition”.

They say it helps with focus and concentration, supports mental performance and boosts physical & mental alertness. Could this be a real-life Limitless pill, or are these Brits tooting their own horn a little too much?

We’re going to focus on the 3 blends and caffeine and weigh up their nootropic benefits.

You already know what vitamins are and why you need them, right? 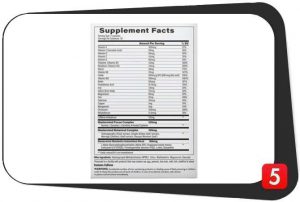 By now you should be pretty sold on the benefits of caffeine as an energy booster, but it does have direct brain-boosting properties too.

Caffeine can make you feel more alert, help you to concentrate and speed up your reaction times as demonstrated in this study, which confirms the finding of many others.

It’s also been shown to boost memory during times of typical low performance.

120mg is about what you’d get in a double espresso, so you’ll feel it but it’s safely under the recommend daily limit of 400mg for adults.

The Focus Complex is intended to sharpen your mental abilities and, of course, focus.

Tyrosine plays a key role in the production of dopamine, adrenaline and noradrenaline.

These are all ‘feel good’ chemicals and neurotransmitters, meaning that the more of them you have in your system, the better your brain works.

Because of this, tyrosine has repeatedly produced excellent results in clinical tests. It improves working memory, promotes alertness and increases cognitive flexibility (how quickly you can switch between different mentally challenging tasks).

It’s strange that Neubria® have decided to go for L-carnitine instead of the acetyl form of l-carnitine (ALCAR). L-carnitine has been mainly linked to improvements in exercise performance because it increases nitric oxide production.

But because we’re looking at a nootropic, we would expect some strong evidence of benefits to mental performance.

Unfortunately, a recent review of all the available evidence found that there wasn’t much to go on.

NAC for short, this is the acetyl form of the amino acid l-cysteine. It has been used to treat everything from male infertility to Tourette syndrome to HIV.

When it comes to improving focus and brainpower, NAC’s job is to replenish your brain’s store of glutathione – an antioxidant that regulates glutamate (a neurotransmitter responsible for memory, behavior and learning).

NAC is most effective in people who have problems with these functions, but may benefit those with healthy brains too.

This little plant offers a lot of benefits. Rather than list every single one, we’ll just look at the effects on mental performance.

But these results were achieved with doses of 300-500mg, so we can’t be sure whether Edge will get you the same results.

Ginkgo biloba has long been touted as a memory enhancer and some studies based on self-reported data seem to support this.

Looking at the wider picture though it seems like there’s no enough evidence to say conclusively that ginkgo biloba benefits brain function in any significant way.

There’s no doubt that moringa is great for your overall health. It’s full of vitamins, minerals and antioxidants, but does it help your brain perform better?

The evidence would suggest that, yes, it can. Most of the research has been done on animals, but moringa could well improve your memory and spatial awareness.

This is probably due to its antioxidant properties and its role in the production of neurotransmitters.

Also known as the herb of grace, bacopa Monnieri is gaining popularity right now thanks to the strong evidence supporting its effectiveness.

Studies on humans have shown that it can improve your visual information processing speed, learning rate and memory.

The problem is, these studies were done at doses of 300-600mg of bacopa, well over double the volume of the entire botanical complex in Neubria® Edge.

Edge’s metabolic/antioxidant blend is intended to fire up your brain and protect your body.

Alpha GPC has proven effective at boosting physical performance for exercise, but does it affect your mental performance?

Maybe, but studies that have been done on how much Alpha GPC affects all aspects of performance have shown mainly physical benefits.

It could help protect your brain from oxidative damage though, which could help fight the effects of ageing.

A great source of antioxidants, GSE can also have a significant impact on your cognitive function and memory. It’s natural and completely safe as well.

Again, like a lot of the ingredients we’ve looked at, the existing evidence is from studies that used much higher dosages than Neubria® Edge contains.

This sexy-sounding compound is ‘vitamin-like’ in its structure and has been linked to a whole load of benefits thanks to its ability to protect cell mitochondria from oxidative damage.

While we need it to function properly, evidence that supplementing with it produces additional benefits is sadly lacking.

PQQ is found in soil, kiwi fruit and human breast milk. It’s another compound that affects metabolism in your cells and the evidence around it is pretty convincing.

Not only has it proven that it can improve physical endurance, by improving blood flow to the brain it can enhance attention and working memory.

Neubria® have clearly put a lot of thought into the formula for Edge by including these ingredients that you won’t find in many other nootropics.

Think about what you’re going to be doing after taking Edge. Probably working, right? That’s probably going to involve looking at a screen for a long period of time.

Lutein is found in green leafy vegetables and is a powerful antioxidant. Zeaxanthin is a natural pigment in paprika, corn and saffron.

Their main function is to protect your eyes from damage caused by looking at blue light (the light given off by the screens on laptops, phones and TVs).

Neubria® are looking at the long game here as well as the short, which is smart thinking. 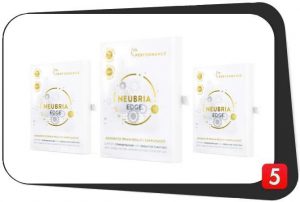 We could dig even deeper into the ingredients and the blends here but really there’s only two things you need to know about Neubria® Edge.

We mentioned this problem a couple of times above when looking at ashwagandha and bacopa, but it applies to all the ingredients in the three blends.

Do the math with us quickly. The combined weight of all the blends is 105mg + 105mg + 186mg for a total of 396mg. Now add up the number of ingredients. We’ll save you the trouble, it’s 14 (counting lutein and zeaxanthin separately).

So, what’s the average serving size of each ingredient? Don’t bother with the calculator, we got you again.

That’s less than 10% of the dose most studies that report benefits of these ingredients use.

Now it might be that some of the ingredients are dosed higher than this and within the effective range. The problem is, they’re blends, and we don’t know the exact ratios of ingredients.

What can you expect from Neubria® Edge? If we look purely at the science behind the ingredients, then we can identify several potential benefits.

Of course, that’s assuming we ignore that pesky dosage issue, and we can’t do that for very long.

Neubria® Edge is a good choice for anyone looking to start with nootropics but might be unsure or inexperienced with them. It’s less suitable for more experienced users who may feel underwhelmed by the effects.

Any Potential Side-Effects with Neubria® Edge?

None of the ingredients of Neubria® Edge pose any major risk, they are safe to take with minimal to no side-effects.

While it’s rooted in good science, the benefits you’ll get from Neubria® Edge depend on how experienced you are with nootropics.

Assuming you’re new to the game, then you can expect some of the pros to apply. If you’re a veteran nootropic user, the cons are likely to apply more.

Let’s go back to that ‘less than 10%’ thing. If you take less than 10% of the recommended dose of anything, you’re not going to feel much of an effect.

Apply this ‘less than 10%’ idea to any area of your life and you’ll see just how ineffective it is.

Yes, it’s better than nothing, and if you’re not using nootropics already then Neubria® Edge could be worth a shot. It’s a decent multivitamin if nothing else.

But if you want a nootropic that offers a good deal more, you’d be better off opting for a proven effective (and much stronger!) nootropic like Performance Lab Mind or Mind Lab Pro.