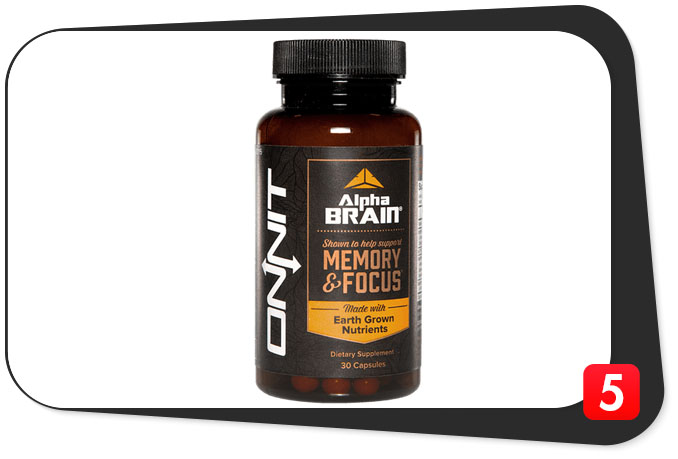 Love him or hate him, Joe Rogan has got a lot of pull when it comes to brain-boosting (and mind-expanding) pursuits.

Alpha BRAIN conjures up Rogan’s name because he is a vocal advocate (and part-owner?) of the brand.

Rogan is one spaced-out dude, but he is razor sharp… and some of those smarts are definitely reflected in the Alpha BRAIN formula.

Read on to learn about what makes this botanical nootropic stack truly one-of-a-kind.

At 27,000,000 capsules sold, Alpha BRAIN is a leading nootropic formula made by Onnit, a “human optimization” company with a celebrity Partner: Comedian and UFC commentator Joe Rogan. Made with what they call “Earth Grown Nutrients,” Alpha BRAIN is designed to “support memory, focus and processing speed,” and is backed by two human clinical trials. Based on those trials’ results, Alpha BRAIN claims to:

Alpha BRAIN’s formula is powered by an unusual nootropic: AC-11®.

A special form of Cat’s Claw herb, AC-11 is Alpha BRAIN’s unique formula feature. AC-11 is patented for its ability to “dissolve” protein tangles that cause brain degeneration. However, despite the patent and its long list of nootropic claims, there is hardly any research on AC-11 as a nootropic. Alpha BRAIN and AC-11 have an exclusive agreement–no other nootropic supplement can use this ingredient.

Alpha BRAIN’s other main nootropics are divided across 3 proprietary blends:

Focus blend features Bacopa, a Best 5 Nootropic that helps learning and mental processing speed. Huperzia serrata (Huperzine-A) is another top nootropic for memory and mental performance. Too bad Alpha GPC isn’t a lesser form of the choline brain-booster. Maybe they included it because it has the word “Alpha” in it. Our #1-ranked nootropic stack supplies the good stuff — Citicoline — which is simply more effective and dynamic than Alpha-GPC for brain health.

Vinpocetine is a Best 5 Nootropic that boosts brain circulation and “fuels” the brain for energized & active thinking. Pterostilbene might be brain-protective; the L-Leucine is not a nootropic and serves no real purpose here.

Rounding out Alpha BRAIN is a dose of Vitamin B-6 (Pyridoxine HCl), which is great for brain chemicals and mood. Alpha BRAIN’s 10 mg dosage is a little low, and Pyridoxine HCl is a less-effective form (P-5-P is best)… but B6 is still a solid nootropic ingredient.

Editor’s Note: Alpha BRAIN has a solid formula, but we actually prefer its more recent incarnation — Alpha BRAIN Instant. It’s a powdered drink mix form of the same nutrients, but delivers much bigger dosages (and might even work faster). Check out our Alpha BRAIN vs. Alpha BRAIN Instant review to see how the two formulas compare.

Alpha BRAIN seems custom-made to boost Alpha brain waves, which feels like “wakeful relaxation.” The Flow State they talk about probably feels like being in the zone: Focused on the task at hand, but with a calm, happy mindset instead of stress and work-frazzled nerves. Other ingredients in Alpha Brain help memory, learning, brain energy and accelerated thinking. They also say the formula helps with communication; an interesting nootropic claim that we haven’t seen before.

Alpha BRAIN seems good for students and professionals who want to supercharge mental performance naturally–so they can do more, excel more, and just keep going without burning out. Also, likely due to ties with Joe Rogan, it has endorsements from pro athletes, trainers, and MMA fighters. Overall it seems to target Alpha males (and Alpha females?) and Type-A personalities. Now there’s a slogan for Alpha BRAIN. “Are you a Type-A?”

Alpha BRAIN’s ingredients are all pretty safe and well-tolerated. It’s noteworthy that even though 27 MILLION capsules of Alpha BRAIN have been sold, there are very few reports of any side effects on the web… giving us even more confidence in the formula’s safety profile.

Alpha BRAIN is incredibly successful… you might want to try it to find out why. It features some great nootropics. Dosages are a mystery and some forms are weak, but it’s hard to argue with two positive clinical trials and 27,000,000 capsules sold. Based on that data, we say that Alpha Brain WORKS. The real X-factor is the formula’s AC-11. If science eventually shows AC-11 has potent nootropic activity–like Alpha BRAIN seems to think it does–then this formula is way ahead of the curve.