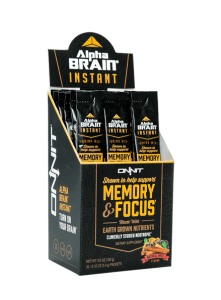 Amazing things can happen when a 750 mg capsule supplement switches to a 3.7 g drink mix packet.

Suddenly, you have room. Sure, some of that extra space is taken up by flavors, along with junk that makes the powder dissolve in water.

But Alpha BRAIN Instant also uses that extra room for a BIG dosage upgrade in one key blend, along with a new premium ingredient… ultimately making it a better formula than the original Alpha BRAIN. Check it:

Alpha BRAIN Instant is a smarter version of a stimulant-free energy drink.

The ingredients in this mix closely mirror Alpha BRAIN original, but with a couple of key upgrades that might make a huge difference in the formula’s effectiveness.

This blend features two of our Best5 Nootropics: Phosphatidylserine for memory and L-Theanine for “wakeful relaxation.” Oatstraw has Alpha brainwave benefits that work well with L-Theanine, promoting a state for calm productivity. The L-Tyrosine is OK for neurotransmitters, but they use the wrong form – N-Acetyl-L-Tyrosine is the form you want for the best brain benefits.

With that kind of potency, it won’t be long before Alpha BRAIN Instant cracks our Best 5 Nootropic Supplements list.

Alpha BRAIN places a big bet on this patented ingredient, which is a water-extract of South American Cat’s Claw herb. In fact, due to an exclusivity agreement, Alpha BRAIN is the only brand of brain supplements that can even use AC-11.

While AC-11 shows promise as a brain nutrient, we still can’t figure out why Alpha BRAIN uses it. AC-11 does NOT appear to be a brain-boosting nootropic.

All evidence (which is early at best) suggests it is more effective for degenerative, age-related brain problems – not for sharpening focus or improving mental performance right now.

Alpha-GPC is an OK form of choline, but Alpha BRAIN Instant should be using Citicoline, which performs the same functions as Alpha-GPC and more.

Bacopa and Huperzia Serrata are both good brain health ingredients, but Alpha BRAIN Instant drops the ball because neither one is standardized to supply the herbs’ active ingredients (bacosides and Huperzine-A, respectively). Weak.

This blend in Alpha BRAIN instant differs from the original; it’s 6 mg bigger in Instant, and now includes BioPerine®, the branded black pepper extract that enhances absorption of other nutrients.

Vinpocetine boosts brain circulation & Pterostilbene protects brain cells. We can’t figure out why L-Leucine is in here. It does nothing for mental performance.

Brain formulas intended for true mental domination will opt for the balls-out potency of P-5-P, even though it’s a more expensive ingredient.

Alpha BRAIN Instant is better than Alpha BRAIN. There, we said it.

One of the gripes we have with Alpha BRAIN is their use of slick-sounding prop blends, which hide the dosages of ingredients and make it impossible to measure them against clinical research. That complaint remains in effect.

These changes are three big steps in the right direction for the Alpha BRAIN brand.

Of course, Alpha BRAIN Instant inherits formula flaws from the original Alpha BRAIN. It uses many cheap nutrient forms, has a lack of standardized herbs, and formulates with some ingredients that just don’t make sense.

Red Flag: Clinical Study Shenanigans. Alpha BRAIN’s manufacturer, Onnit, conducted 2 human clinical trials demonstrating it works. The red flag is, they use the same exact clinical trials to tout the “clinically proven” benefits of Alpha BRAIN Instant… even though it’s a different formula than what was used in their clinical studies.

It’s marketed as supporting memory, focus, and processing speed. The strongest aspect of this formula is the Flow Blend, especially at double dosage. With L-Theanine+Oatstraw, this blend should unlock Alpha brainwave support that promotes feelings of relaxed alertness that is great for creativity and productivity.

The emphasis seems to be on professionals who need a convenient, stimulant-free support product that helps them “get shit done.” They also talk about faster processing speed “improving reaction time to external stimulus,” a benefit that seems to target athletes and gamers.

Probably not. Two clinical trials of Alpha BRAIN have shown no adverse effects, and the formula has been around for four years without causing any big problems. It’s also stimulant-free, so no jitters or nervousness are associated with this formula.

Alpha BRAIN Instant is an upgrade over Alpha BRAIN. By including absorption-enhancing BioPerine and nearly doubling the Flow Blend dosage, they might have just dramatically improved the effectiveness of Alpha BRAIN’s formula. It might even work now. Who knows… Alpha BRAIN Instant may someday crack our Best 5 Nootropic Supplements.