Pitting Alpha BRAIN & Alpha BRAIN Instant against each other follows like the fight between Tyler Durden and the narrator in Fight Club: Despite being essentially the same person/thing, one is undeniably “better” than the other.

Recycling their original, all-natural, non-caffeinated nootropic formula, Onnit reconfigures the Alpha BRAIN design from capsules to powdered drink mixtures to “save you the time it takes for the body to dissolve the capsule.”

Ooh, so that’s what they mean by “Instant.”

The concept is cool… but does it actually improve upon Alpha BRAIN?

Or is Onnit selling the same “all-singing, all-dancing” formula?

Both these fighters are about to enter the Nootropic Big Time… which one will crack our Best 5? Let’s find out.

Alpha BRAIN & Alpha BRAIN Instant are damn-near identical, making this fight a tough one… Hopefully we don’t have to get too nit-picky in our judgment calls.

While, the big differences will be explored in the later rounds, there’s enough change here to give one supplement an edge over the other.

It’s a good formula that almost made it to our Best 5 Nootropic Supplements of 2016 list.

The formulas’ particular emphasis on boosting Alpha brain waves—a mental state of “wakeful relaxation”—is accomplished by the Flow Blend’s L-Theanine & Oatstraw content. This is where the whole “Alpha Brain” business comes from. Additionally, the blend’s Phosphatidylserine fulfills the supplements’ claims on memory.

Strangely, Alpha BRAIN’s driving-force ingredient AC-11® branded Cat’s Claw has an exclusive agreement with Alpha BRAIN. We say “strangely” because Onnit is placing a big bet on this patented ingredient that doesn’t seem to be a brain-boosting nootropic.

The formulas would be a lot stronger if they took the effort that went into AC-11 and transferred it into the Focus & Fuel Blends:

Up until this point, both formulas have been identical… But if you look closely on Alpha BRAIN Instant’s Fuel Blend, you’ll find a fairly remarkable addition: BioPerine® Black Pepper.

It doesn’t take much Black Pepper extract to boost the bioavailability of a formula, so we’re somewhat surprised that more supplements don’t use it. While Alpha BRAIN Instant also adds a number of “Other Ingredients” junk that slightly lowers the formula’s value, its BioPerine more than makes up for this.

This Round 1 win is a tiny win for Alpha BRAIN Instant… but it’s a win all the same.

And here’s the BIGGEST difference between Alpha BRAIN & Alpha BRAIN Instant: Their dosages.

Overall, Alpha BRAIN Instant bumps the dosage from a 1,315 mg capsule to a 3.7 g drink mixture. Granted that a portion of this is taken up by flavor fillers (Peach? Natural Spice?? Sign me the funk up!), the dosage increase manifests itself in the nootropics, as well:

Instant’s Fuel Blend also gains 6 mg, but this is most likely from the BioPerine.

However, despite the improvements, two complaints we had with Alpha BRAIN remain in Instant:

Oh, well… what can you do, eh? Either way you spin it, Alpha BRAIN Instant’s dosages are a massive improvement from the original Alpha BRAIN’s.

How do you judge a round when both fighters punch each other in the face at the exact same time? Aside from BioPerine, Alpha BRAIN & Alpha BRAIN Instant use the same exact ingredients.

The only vitamin, B6, is sub-par (P-5-P is better) and we already mentioned our preference for Citicoline over Alpha-GPC. The Tyrosine could be replaced with N-Acetyl in both formulas, and we would like to see standardizations on those herbs (we’re neglecting to mention the standardized AC-11, because we’re not even sure it works).

However, Alpha BRAIN has a clean label with only 2 items listed under the “Other Ingredients.” Alpha BRAIN Instant has 10+ items.

Are we nit-picking here? Probably… As far as the primary ingredients go, the supplements are tied.

But, overall, Alpha BRAIN takes a small lead with its cleaner label.

Alpha BRAIN: “I am Jack’s inflamed sense of rejection.”

But this doesn’t mean that Alpha BRAIN is an inferior nootropic. We were fans of the original formula before reviewing Instant, and that hasn’t changed… We’re just bigger fans of Instant now.

Considering its improvements and the fact that it’s cheaper, the judgment call here is a no-BRAINer. 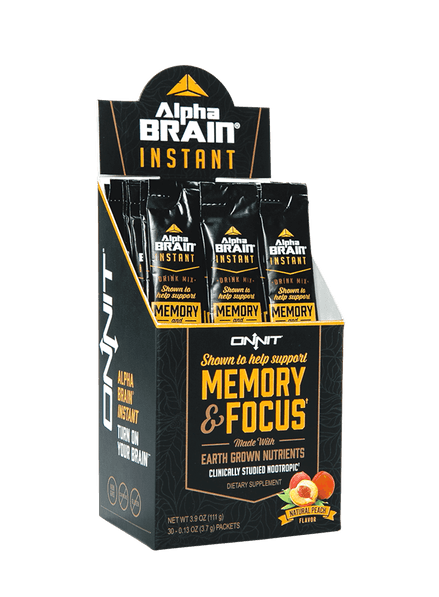