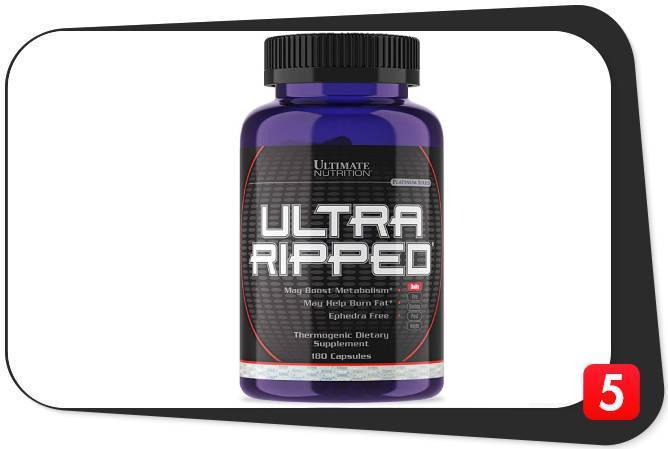 Fat burner pills are one of the most commonly sought-after fitness supplements around; you’ve probably been exposed to hundreds of adverts online promising amazing results. Sadly, many such pills on the market are overhyped and underwhelming.

Even those pills that work need significant commitment from yourself to maintain a weight loss diet and exercise regime in order to deliver the best results.

All of the above has given rise to the belief that fat burning supplements are without merit, but this is inaccurate.

There are effective fat burning supplements out there, and in this article, we’ll be examining whether Ultra Ripped by Ultimate Nutrition is one such product.

Before we delve into the specifics, it’s worth knowing how fat burners are supposed to work, as opposed to the ‘miracle pill’ promises that many unscrupulous manufacturers make.

As we said, the main problem with fat burners is perception, people think that taking a fat burner is going to transform their physique in just a couple of weeks. This, of course, is not how they work. Fat burners are designed to supplement your diet and exercise regime, not to replace it.

A good fat burning supplement will only work well when combined with a calorie-controlled diet and frequent exercise. Fat burners can help this process by including ingredients that help to suppress the appetite and/or encourage thermogenesis – the metabolic process which raises your body’s core temperature, allowing you to burn more calories as you exercise/ go about your day.

So the appetite suppressant side of a good fat burner can help you to reduce your calories a little each day, while the small increase in calories burned per day (due to the thermogenic effect of certain ingredients) helps to create a larger calorie deficit, which can improve weight loss.

As you can see, we’re not talking about melting fat off you within 24 hours. Fat burning supplements are a small tool that help contribute to weight loss.

Don’t underestimate the impact that a small 1% difference in your calories in/calories out balance can have in the long term. But don’t overestimate it either, you’ll only end up disappointed.

About Ultra Ripped by Ultimate Nutrition

Ultimate Nutrition is an American supplement company that has been around for over 40 years, based in Connecticut. They are probably best known for their Prostar 100% Whey protein supplement, but they sell a huge range of supplements.

Ultra Ripped is a fat burning supplement that promises to reduce your appetite, increase your energy, and burn calories. It is marketed as a thermogenic dietary supplement, meaning that it causes your body temperature to rise, which, as we said earlier, can boost your metabolism and help you burn more calories.

So far, it really sounds like exactly the type of fat burner that you want. Lowering your appetite will mean that you can survive on lower calories without caving in and gorging yourself on chips! Boosting your energy will help combat the fatigue and lethargy that reducing calories can cause, helping you to train harder than you would normally be able to (more calories burned).

Finally, increasing your metabolism through thermogenesis means that you can create a slightly larger calorie deficit which may speed up your fat loss.

Let’s see whether Ultra Ripped by Ultimate Nutrition has the right ingredients to live up to these claims.

Annoyingly, Ultimate Nutrition have included a proprietary blend in their formula. When reviewing a supplement, the absolute worst thing that a company can do is use a proprietary blend because it disguises the correct dosages of the most important ingredients. This means that we have no idea how effective each ingredient is.

Companies do this for a number of reasons – they will tell you that it’s to protect their exact formula from competitors – but it is often also used to disguise the fact that one or more of their ingredients is under-dosed. We have no way of knowing the real motivation here, but it’s best to always be a little skeptical with proprietary blends.

We’ll review each ingredient anyway, but clearly there is an issue with this supplement.

Chromium is a mineral that can be found in abundance in most diets. Seriously, you can find it in dairy, meat, whole-grain foods, vegetables. However, if you tend to eat a lot of junk food it can actually lead to a loss of chromium and may cause diabetes [1]. That has led many people to claim that increasing chromium through supplementation can help with weight loss. The theory makes sense, but sadly the scientific evidence is lacking.

Several studies have failed to see any reduction in body fat after taking chromium [2][3]. Even if chromium did help with weight loss or diabetes, supplementation would still not be necessary. As we said, it is present in a huge variety of foods. Fruit, veg, meat, dairy, even alcohol. Every form of diet is covered. Just cut out junk food and add some slightly healthier foods.

One potential benefit of chromium supplementation is appetite reduction in people with (self-reported) bad diets. A 2005 study found that people who suffered from carbohydrate cravings and depression saw a reduction in appetite when taking 600mcg of chromium per day for eight weeks [4]. Bear in mind that two servings of Ultra Ripped contain just 200mcg of chromium so it may be underdosed in any case.

Garcinia cambogia is a fruit that grows in South East Asia and Central Africa, it is often added to recipes to improve the taste. Some studies report that it can increase satiety after a meal (makes you feel full afterwards) but the evidence for this is unreliable. Garcinia is not known to have any effect on weight loss, so we can only assume that it has been added for its supposed appetite reducing properties.

Ephedrine was for a long time the go-to supplement for bodybuilders who wanted to lose weight. The reason? It worked. Incredibly well. If anyone tells you that fat loss supplements don’t work, then tell them about ephedrine. A fat loss ingredient that was so effective that it was banned.

The ban was due to ephedrine being dangerous.

It worked by causing a massive increase in thermogenesis which raises your metabolism, but also raises your blood pressure, and increases your risk of stroke.

Since ephedrine was rightly banned, many ingredients have been found that can replicate the results but in a ‘safer’ way (more on the reason for those quotation marks shortly). Synephrine, octodrine, and many others work in the same way as ephedrine but are not as powerful.

Synephrine can be an effective ingredient, but it all depends on what ratio of the bitter orange is made up of synephrine.

It can range anywhere from 6% to 60%, with the higher the ratio the more effective it is.

As Ultimate Nutrition does not tell us what ratio there is, it is hard for us to judge.

50mg of synephrine can raise your metabolism by 65kcal over a period of 75 minutes [5], so if the 133mg of bitter orange contains 60% synephrine you’re looking at a calorie burning potential of 79.8 calories for each serving, or an extra 159 calories per day. Nothing to be sniffed at.

Now, we come to the reason for the ‘safer’ quotation marks. There is still some question over how safe synephrine really is. WebMD, for instance, describes bitter orange as ‘possibly unsafe’ when taken as a supplement for weight loss.

It adds: “Bitter orange, taken by itself or with stimulants such as caffeine or caffeine-containing herbs, might increase the risk for high blood pressure, fainting, heart attack, stroke, and other severe side effects. There are reports that bitter orange can trigger headaches, including migraine and cluster headaches, in some people.”

Bitter orange can also  interact with several drugs so if you do want to try this product and are on medication, you should speak to your doctor first.

Whether synephrine works or not may be incidental as it is also a banned substance with certain sporting bodies such as the National Collegiate Athletic Association (NCAA). If you are an athlete, then make sure that synephrine is not on the banned list.

While green tea catechins have been shown to increase fat oxidation, it is only at high doses (400-500mg). Considering that the entire proprietary blend is just 277mg we can safely assume that this ingredient is way too underdosed to be of value.

The final ingredient in this so far hopeless proprietary blend is white willow bark. It is often described as similar to aspirin, which explains why it has been added to this supplement. In the old days when ephedrine was available to buy, it was combined with caffeine and aspirin to create the ECA stack. A combination of ingredients that led to massive fat loss results (as well as severe health issues in some cases).

Sadly, while these ingredients are (supposedly) safer, they are also much less effective. So much so that they are unlikely to cause much fat loss at all. Sure, if the synephrine is well dosed you might see some fat loss, but white willow bark is not going to do anything. 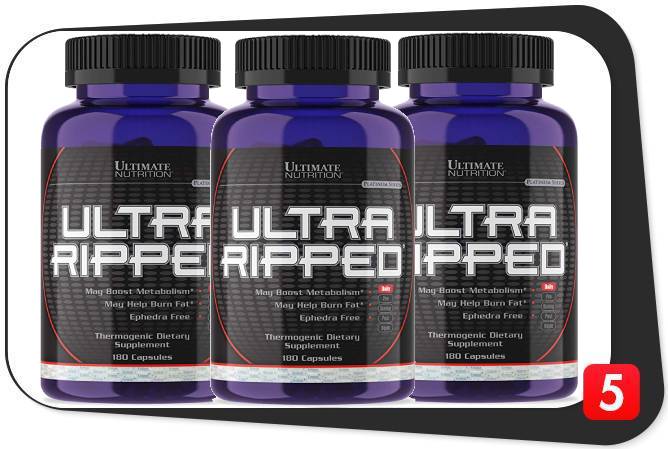 The benefits of Ultra Ripped are a little theoretical. Synephrine (from bitter orange) is somewhat effective at raising your metabolism, but we need to know what ratio of the bitter orange is made up of synephrine before we can say whether it is effective or not.

Green tea and guarana are theoretically effective, but badly dosed here. Chromium and Garcinia are decent appetite suppressors, but nothing more. Ultra Ripped may be an okay appetite suppressor, and a mild metabolism raiser. That’s all we can say about it really.

There is no specific market in mind, as far as we can tell. However, this is definitely going to appeal to people who are overweight as well as people who are seriously into their fitness. A fat loss supplement that works is going to be sought after by people from all walks of life.

Due to the thermogenic properties of bitter orange though, this may not be suitable for the elderly or infirm. Or, we’d suggest, anyone with heart issues or blood pressure issues (and, on certain medications).

This is an interesting one, because you’ll probably only notice side effects if the ingredients are doing their job! If there is enough synephrine to raise your body temperature then you will experience the high blood pressure, sweating, and flushed face that is associated with that.

The supplement itself recommends that pregnant women avoid it, as should people with high blood pressure, diabetes (losing a large chunk of their target audience there), or people who have suffered from strokes or similar metabolic disorders.

Ultra Ripped Price and Where to Buy

You can find Ultra Ripped on the Ultimate Nutrition website where it is currently sold for $32.45 for 180 capsules. This works out at $0.36 per serving.

Sadly, Ultra Ripped by Ultimate Nutrition falls into the ineffective category. Sure, there is potential. Synephrine can work, but the rest of the ingredients may as well not be there, and the synephrine may be present in such small amounts that it is useless anyway!

If it is included at a decent enough dose to work, you may then run into health concerns.

Truth is, there are better, much smarter alternatives out there.