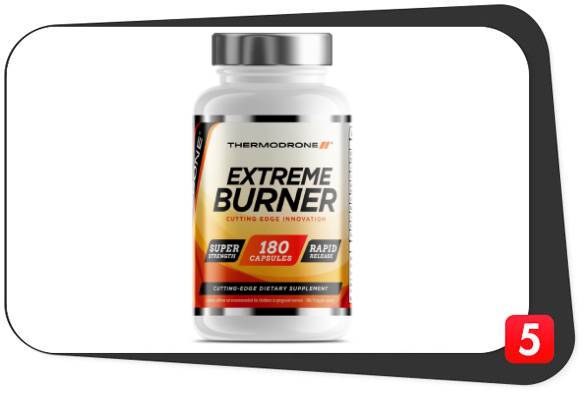 Their popularity has risen in recent years as our lives have become busier, and instant results are in demand. As such, the internet is abuzz with new and improved fat burners.

We’re here to talk about one of the latest – Thermodrone Extreme Burner.

Thermodrone Extreme Burner comes to us as one of the leading UK-based fat burners in terms of sales. It was difficult to find their actual website, as most of their sales occur through third-party vendors, but we did find a Facebook page. Further investigation led us to their new website in the end.

Thermodrone’s Extreme Burner promises cutting-edge innovation, a high-strength, specially formulated product, and no banned substances to “ignite your inner fire and get the results”. It sounds great from their marketing

With so much hype behind it, it begs the question, “how does it work?”

And further, “does it do what it claims?”

Let’s take a closer look at its individual ingredients, and how they work together, to determine if this fat burner does what it’s designed to do.

Let’s investigate each of these ingredients further.

Caffeine anhydrous just means caffeine without water. By removing dilution from water, it provides a more concentrated, potent form of the stimulant. By increasing energy levels, it raises the likelihood that you’ll burn more fat from activity. It’s also shown to boost metabolic rate on its own.

According to research from the American Journal of Clinical Nutrition, metabolic rate increases up to three hours after consumption of 8 mg of caffeine. Even when they dropped the amount to 4 mg, researchers still observed an elevated metabolic rate, with further increases in fat oxidation. Yet Thermodrone Extreme Burner only contains 1.75 g per serving, which is far under the clinically effective dose for fat burning.

Tyrosine is an amino acid that stimulates thermogenesis, or the production of heat within the body. As calories are a direct measure of heat, the more heat you produce, the more calories you burn. Unfortunately, it’s posited to do so through its conversion to epinephrine through dopamine.

While tyrosine is a precursor to dopamine, some of the dopamine needs to be converted to adrenaline in order to stimulate increased energy expenditure. Assuming ALL of tyrosine-converted-dopamine changes form, epinephrine still has a short half life. Its effects dissipate within about 5-10 minutes. Therefore, tyrosine doesn’t quite have the desired fat-burning effect.

A more effective option would be something that mimics adrenaline, but isn’t exactly adrenaline itself. Yet the FDA is starting to ban those from the market due to their dangers, so it’s a real catch-22.

As bitter orange extract, citrus aurantium also shows promise in increasing thermogenesis. Due to its beta agonist content, this ingredient increases the effects of norepinephrine in the body. Studies show that norepinephrine stimulates lipolysis, or the breakdown of fat.

Further research indicates that citrus aurantium directly relates to a loss in fat mass. When compared to a control group, loss of fat mass and body weight losses were statistically greater. As a natural substitute for ephedrine, citrus aurantium’s interaction with norepinephrine works to induce fat burning through thermogenesis.

One warning – because of its ephedra-mimicking qualities, citrus aurantium is banned in American collegiate sports, according to the NCAA.

Tryptophan is also an amino acid, known for its effects on serotonin. However, it’s more associated with its sleep-inducing benefits than anything. Theoretically, it’s also an appetite suppressant, as its conversion to serotonin regulates satiety and sleep. A few double-blind studies have proven L-tryptophan to be more effective than placebo for weight loss. Good news for those looking in to this supplement. However, it might counteract the energy-driving effects of caffeine, so consider when you’re using Thermodrone Extreme Burner.

Green tea extract is one of the most evidence-based fat burners out there. Containing catechins, molecules that induce fat loss, green tea extract has been tested time and time again in the lab. One meta-analysis from the International Journal of Obesity showed that catechins, specifically epigallocatechin gallate (EGCG), correlate positively with both weight loss and weight management after the fact. Others found a drastic drop in subcutaneous and visceral fat, as well as lower blood pressure when compared to a control. As green tea extract is one of the strongest natural sources of catechins (and a high concentration of EGCG), it’s safe to say this was a smart addition.

Guarana extract comes from an Amazonian plant similar to coffee, except with twice the amount of caffeine. Unlike coffee, it also contains two other stimulants – theobromine and theophylline. Theobromine inhibits phosphodiesterases and blocks adenosine receptors, simultaneously lowering blood pressure and reducing fatigue. Theophylline is used to treat asthma and other chest tightness by opening up the airways.

For the above reasons, guarana is usually included in energy drinks. While not a direct fat burning effect, it can help you train harder during instances of low energy. Guarana is a banned substance for athletes, according to the NCAA, so avoid this supplement if you’re a collegiate athlete.

L-carnitine is a non-essential amino acid, meaning we can make it within the body by synthesizing lysine and methionine. Its role in transporting fatty acids into mitochondria suggests it might be a critical fat-burning supplement. However, research provides mixed results. One study showed no difference in fat loss in moderately obese women. An animal study confirmed no significant difference in fat loss between two groups on a calorie-restricted diet, and another showed the same with an exercise regimen. Finally, one meta-analysis did conclude that l-carnitine supplementation yielded more weight loss, but the results faded quickly over time.

Niacin, also known as vitamin B3, dilates your vessels to allow for greater blood flow. As such, it’s famous for causing a flush – a warm, tingly sensation that can leave your skin blotchy. It can be an uncomfortable side effect for some, and potentially not worth the small amount of benefit.

One study on rats confirms that niacin helps reduce adipose-tissue inflammation, but doesn’t promote fat loss in itself. Other than that, there’s not a ton of trustworthy research on niacin as a fat burner. It is a vasodilator, however, which might make your workouts better. But again, only if you can handle the tingling and flush.

Cayenne pepper features capsaicinoids, compounds that stimulate your sympathetic nervous system. As such, those famous catecholamines get released, and your body gets ready for action. A promising new study shows that these compounds not only activate brown fat, but help convert white fat to the less-damaging brown.

A quick aside – brown fat actually generates heat and burns calories, while white fat is the stale adipose tissue associated with obesity and metabolic disease.

Cayenne pepper, therefore, not only stimulates extra calorie burning, but it specifically works to break down unwanted fat. 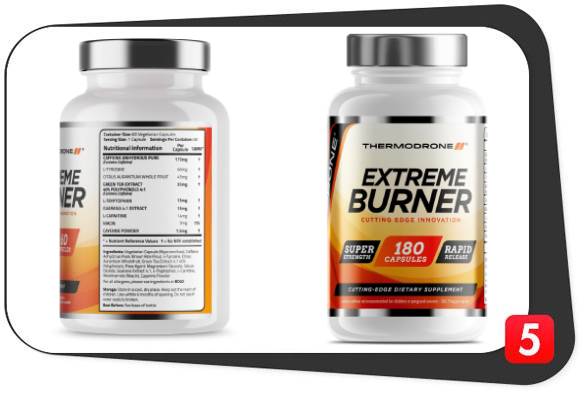 According to a 2006 study out of the International Journal of Obesity, “A combination of tyrosine, capsaicin, catechins and caffeine may stimulate the sympathetic nervous system and promote satiety, lipolysis and thermogenesis. In addition, dietary calcium may increase fecal fat excretion.”

Thermodrone Extreme Burner contains these exact ingredients, with a few extras in the mix. That’s not too bad of a swing, if you ask us. They clearly did their research on what to include. If they had stuck with that, they’d be golden. Unfortunately, it’s what they neglected to leave out that’s the problem.

Both guarana and citrus aurantium have made it onto a banned supplements list somewhere, which indicates negative effects on health. More and more companies are starting to remove niacin from their formulation due to its side effects. Tryptophan could potentially make you sleepy.

L-carnitine doesn’t really do much, so it’s not a bad ingredient. But you’re likely wasting your money paying for something ineffective. To be honest, even the effects of L-tyrosine fade quickly. But we’ll give them that one, as it’s definitely a nootropic that could promote better focus during training.

The biggest positives come in the core ingredients – cayenne powder, green tea extract, and caffeine. These three have the most evidence-based effects on fat loss. We’d like to see a little more cayenne, however, or at least know that it’s standardized for a certain percentage of capsaicinoids.

It looks like its marketed at already active, relatively fit individuals who want to burn stubborn, extra fat. The picture on their website literally features a backdrop of a very fit man and woman.

While overweight or obese men and women could benefit from some ingredients, others are designed for a hard training session. Moreover, it’s all over the bodybuilding forums, so it leans a little toward that market.

The stimulant combinations are a little concerning. While caffeine and guarana definitely invigorate you, the sheer amount lends towards jittery side effects. With almost three espresso shots-worth of caffeine, plus half of the absolute maximum daily Guarana dose, it’s not looking great.

There’s also the niacin flush to think about, and the risks of citrus aurantium. Therefore, potential side effects of Thermodrone Extreme Burner include:

As a whole, Thermodrone Extreme Fat Burner offers a few positives and some negatives.

At only £15.99 for 60 capsules, it’s no wonder this product is flying off of the shelves. But it looks like you get what you pay for in this one – a moderate level of evidence-backed ingredients for moderate results.

Thermodrone does a few things right, and a few things wrong. If you’re on a tight budget, and already have your nutrition and training dialed in, it might be effective. But if you ask us, it’s worth it to splurge a bit on something more effective in the long-run.