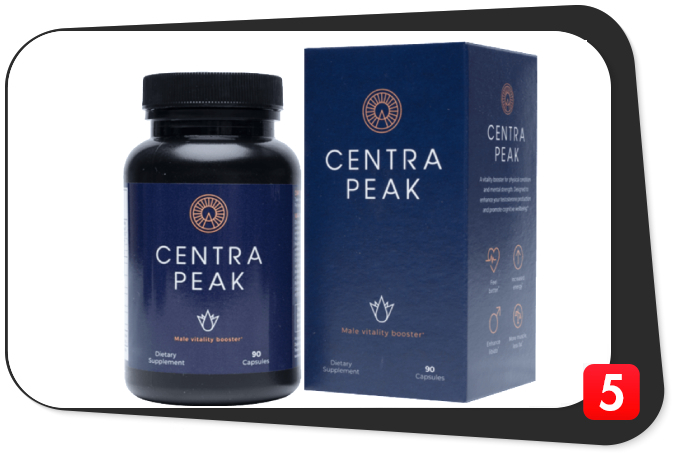 The testosterone booster market has become increasingly crowded in recent years, and it’s not often a new and innovative product catches the eye. Which is why Centrapeak caught our attention recently.

We decided that despite the product only being released in early 2019, it was interesting enough to our readers to warrant a full in-depth review.

Centrapeak is a natural supplement aimed at enhancing testosterone but a couple of things make it stand out. For a start it’s described as a ‘Male Vitality Booster’ rather than a test booster.

Why? It’s got a very strong line-up of ingredients that have been shown to boost test levels, but it also contains ingredients you’d normally find in an nootropic supplement. For those of you who don’t know, Nootropics are supplements aimed at improving cognitive function. That could be memory, concentration, or mental recovery.

In the case of Centrapeak, the ingredients are included to reduce stress and improve mood. In short, it doesn’t just boost testosterone, it makes you feel better too.

It’s this combination which is proving crucial, and it’s why the product is being so well received.

You can only buy Centrapeak from their official website

How does it work?

We’ve said it before, and doubtlessly we’ll say it again – as you get older your testosterone levels decline.

That’s completely natural. And for a lot of guys, they can happily live with that. They can still hit the gym and still make good gains, they look good, feel good and they still have high libido. Sometimes well into their 60s and beyond.

Unfortunately that’s not the case for all guys, a big chunk of us don’t get that lucky.

Take a look at the table below, those numbers are taken from a study done by E. Barrett-Connor of the University of California, San Diego entitled “Male testosterone: what is normal?”

What’s scary about this (to us anyway) isn’t the average decline – it’s the difference between low and high. The guys at the bottom end of the scale have around 20% the free testosterone of the guys at the top. And those guys at the bottom aren’t rare cases either, we are not talking about one or two guys skewing the numbers.

Take this large scale study conducted by, among others, the University of Florida in Gainsville (brilliant!). Conducted on 2162 US males it concluded that a massive 38% of them had hypogonadism.

Centrapeak contains ingredients that have an extremely strong scientific background for increasing low test levels. Not only that, the majority of those ingredients also have strong results in clinical studies for reducing stress and increasing feelings of wellbeing. Double whammy.

As you’ll see in the ingredients section below, the dosages on all of these ingredients are at safe yet effective levels. Since the product is formulated to increase test levels and reduce stress, the benefits it delivers are;

The product was only launched in February of 2019 so the positive testimonials are only now starting to come through in volume as guys finish their first three month cycle.

They are using Yotpo, that’s a sign of trust because it’s difficult to fake Yotpo reviews from verified buyers. 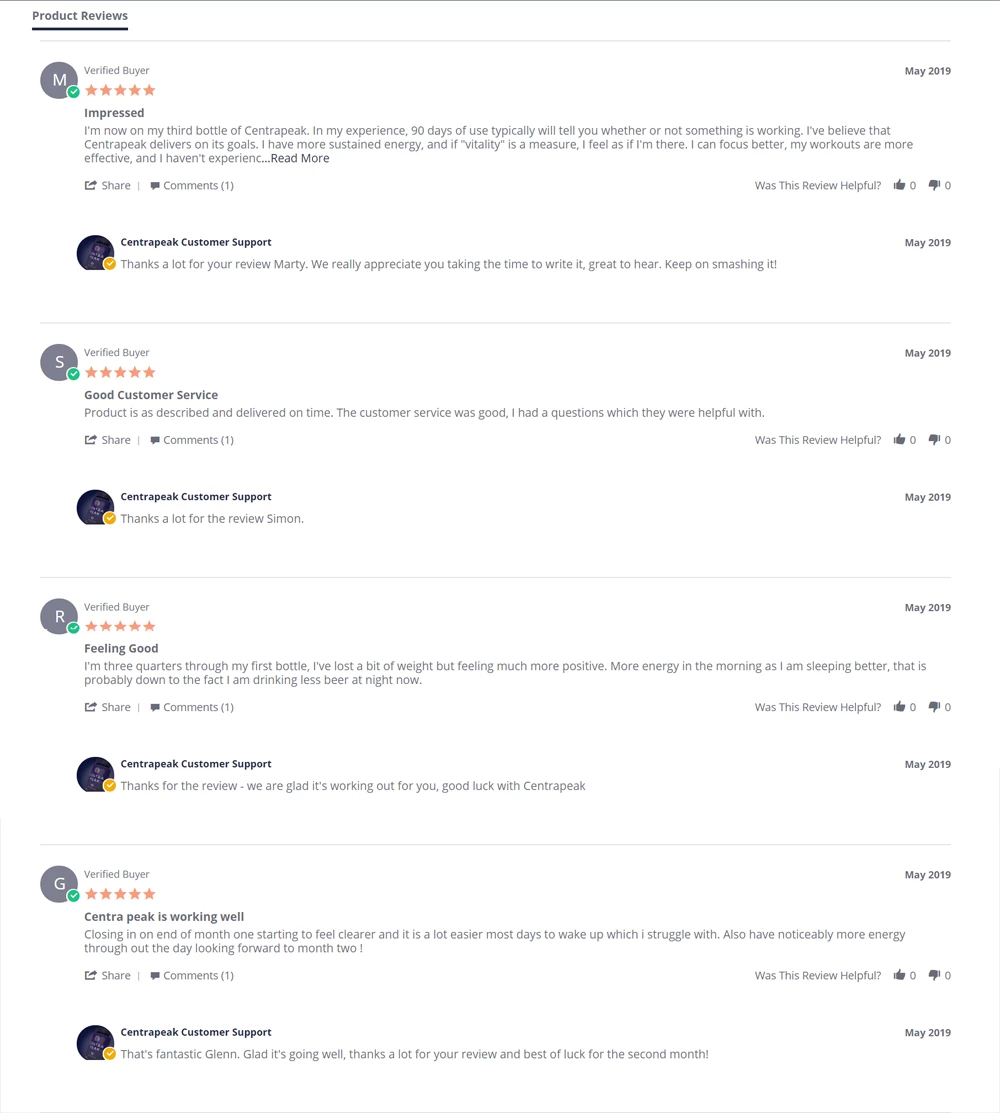 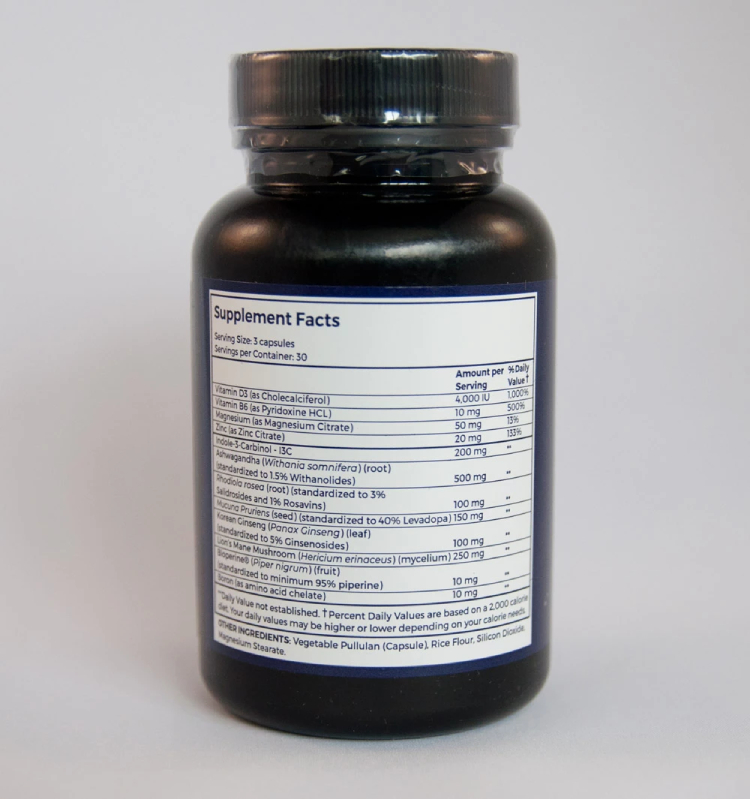 In relation to testosterone the ingredients included (at the dosages in this product) have been shown to;

-DECREASE Estrogen, prolactin, estriadol and SHBG. Interestingly the main estrogen inhibitor has also been shown to reduce estrogen potency as well as the production of estrogen.

On the cognitive side, the ingredients have been shown to;

*You can read more about the ingredients and the studies these results are based on in the thorough ingredients section on the product website.

Vitamin D3 is in nearly every good testosterone boosting product available. Simply because it works. Centrapeak have gone in hard with a 4000IU dose of ‘the sunshine vitamin’, ensuring that your levels are kept sky high. Helping your body push levels of testosterone up. A study [1] into vitamin D3 which gave subjects a 12 month course, found it resulted in significantly increased testosterone levels.

An ingredient that has been found to reduce estrogen levels, Indole-3-Carbinol or I3C is something that is commonly found in green vegetables. Lower estrogen levels mean your testosterone levels will have the ability to build up, once again leading to a number of benefits. A study [2] backed up the fact that I3C can reduce estrogen, it has also been shown to reduce the potency of existing estrogen.

Ashwagandha is a cortisol killing ingredient. Responsible for up to a 30% reduction of this testosterone damaging stress hormone in some cases, Ashwagandha has been around for hundreds of years. It’s a great addition to the Centrapeak formula as it means your body can focus on building up testosterone levels as opposed to slowing them down due to stress. It’s also a great source of some important alkaloids and fatty acids. A 2015 study [3] also found that Ashwagandha supplementation also positively impacted the muscle mass of a set of subjects.

If you’re looking to improve mental and physical performance and even influence your output in the gym you can do far worse than taking a supplement that includes Rhodiola Rosea. It’s been studied [4] for its ability to reduce fatigue, and also because it can impact cortisol levels, is closely linked to the production of testosterone in the body. Centrapeak includes 100mg of this natural herb which is a dependable dose which can get you results.

Mucuna Pruriens are a very exciting ingredient when it comes to testosterone production. This is because research has shown that it can positively impact dopamine levels through being a source of levodopa. Dopamine can prevent testosterone levels dropping by blocking the reduction of prolactin, which is responsible for falling testosterone levels. This natural bean extract is also widely known to help with infertility and low sperm count. Studies [5] found that Mucuna Pruriens had an ability to increase sperm mobility, researchers also saw an increase in testosterone levels. Centrapeak have put 150mg of this exciting ingredient into each serving, which will lead to positive effects on testosterone and potentially libido.

A key part of Centrapeak’s formula is it’s ability to boost testosterone and also cognition. And Korean Panax Ginseng is an ingredient that ticks both of these boxes. A study found that Korean Panax Ginseng subjects who were given KPG benefited from a boosted libido and increase to testosterone levels. Whilst these subjects were rats, the results were conclusive and a study [6] conducted on men also found that they were able to hold more powerful erections.

Lions Mane is one of the best known ingredients to improve brain health and cognitive function. Lions Mane has been found to increase the amount of nerve growth factor [7], a hormone that both repairs and grows new neurons. It’s especially linked to the development and repair of neurons that transmit pain, temperature, and touch sensations. Because of this incredible ability, Lions Mane can help fight depression, prevent age related cognitive decline and reduce stress. This is an incredible ingredient to supplement and Centrapeak’s high 250mg dose will get the most from this inclusion.

Boron is an essential mineral for bone health and one that also plays a key role in the production of testosterone. When supplemented at 10mg, Boron has demonstrated in studies that it can increase testosterone [8]. As well as increases in this key hormone, there was also a reduction in cortisol. Boron can be difficult to get in high amounts from a normal diet so supplementation is essential. Centrapeak has 10mg of Boron in its daily serving, which is perfect amount to help elevate testosterone.

You need Zinc in your diet. And it plays a major role in many bodily functions, the production of testosterone included. Despite needing Zinc, nearly a quarter of people are thought to be deficient. This mineral should be a priority for anyone looking to maintain good health. In this study [9], Zinc supplementation prevented prevented a drop in testosterone due to exercise fatigue. Zinc can lead to increases in testosterone and another key androgen DHT. It can also greatly improve general wellbeing.

B6 is another very common ingredient in testosterone boosters and nootropics. Because it works. B6 can aid in the reduction of estrogen and also plays a key part in the production of androgens which are responsible for testosterone production [10]. When supplemented alongside the right kind of exercise, B6 also shows the ability to increase growth hormone.

Magnesium is a huge part of our diet, it impacts our day to day health and can play an important role in the quality of your sleep. Magnesium has been found to improve levels of testosterone in older men [11] and people who exercise regularly. In terms of it’s effects, magnesium can work with the vitamin D3 in Centrapeak to help elevate your testosterone levels. Magnesium is also important when it comes to cognition, and has been used as a key mineral in the treatment of depression.

There are unlikely to be any side effects from taking Centrapeak. Whilst the actual combination of ingredients in the formula is unique, the ingredients and dosages in the product are present in a number of top performing supplements which have been on the market for many years. However, if you are already taking medication you should always double check with your physician that it’s OK to also take a supplement.

Tax is included in the price. Shipping is free to the mainland USA on all orders and a flat $12.99 to outlying areas of the USA and Canada. 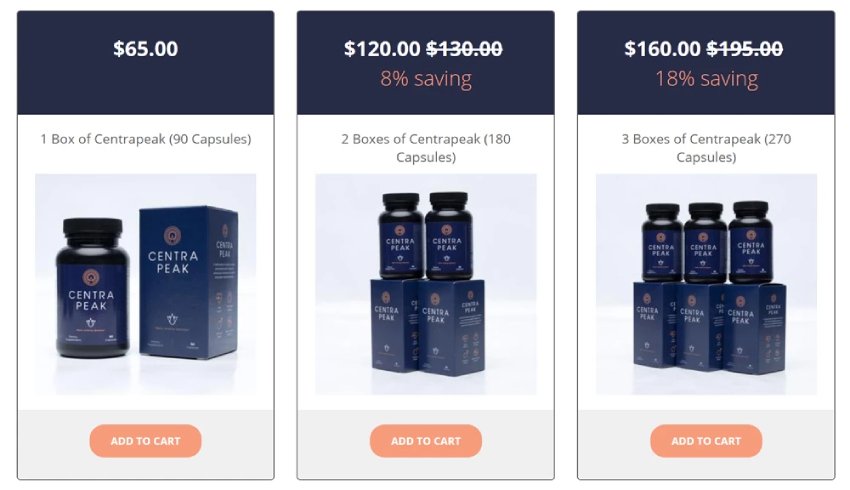 Note: The product is currently only available in the USA and Canada.

There is only one place to buy – the manufacturer’s website. It’s a common thing amongst the premium supplement manufacturers, you won’t find them on GNC or anywhere else.

We’ve finished our Centrapeak review, so what is our verdict? Truthfully, there could only ever be one;

It’s not a close run thing, this a high quality product and you can tell a lot of effort has gone into creating a formula like this. Just about every ingredient is a proven star at both boosting testosterone in those suffering ‘Low T’, and helping reduce stress and increase mental wellbeing.

Look into the science behind it on the Centrapeak website’s ingredients page. You could well end up writing a testimonial for the product yourself.

You can learn more about it by visiting their official website here.