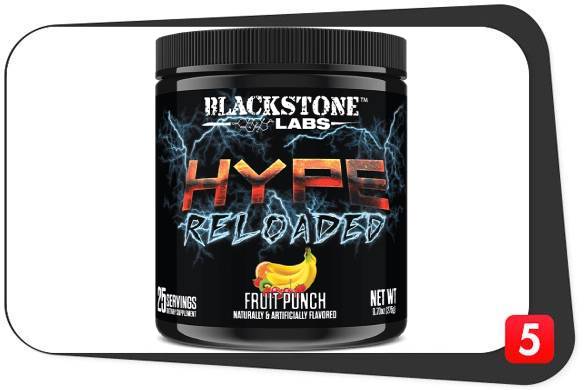 Is this product all hype? Well that’s the question we’re answering today – puns aside, it’s an interesting product and we’ll see just how it holds up.

This product comes with one of those ‘unnecessarily macho’ titles that makes it sound like something other than food extracts in a pill. It’s easy to slap a bunch of buzzwords on your product label, but it’s much harder to put together a scientific, effective product.

Today we’ll dig down into Blackstone Lab’s “Hype Reloaded” and see if it stands up. Whether it’s the best or total bunk, you’ll know enough to decide for yourself by the end of this review.

The idea behind this product is a simple one: all the benefits of the nitric oxide booster you might get from a pre-workout but totally stimulant-free.

Is Hype Reloaded a pre-workout? Well that’s not entirely clear: it could be used as a pre-workout supplement, but in theory it’s also got wider benefits that we’re going to discuss later. The main intention is to produce better ‘pumps.’ We’ll delve into the specifics of that shortly.

In the meantime, what we can say for sure is that this product is designed to support better workouts. Whether you’re taking this product before a workout or as a part of your daily diet, the results seem relatively legit. If the ingredients stand up to scrutiny, that is.

Enough first impressions; let’s get into the specifics.

Here’s the full label, so you can get a clear picture of what this product is bringing to the table – and you can refer back to it when we start getting into the gritty details:

This product is a powder so you’re going to want to take a single scoop with 6-8oz of water daily. It’s intended to be taken 20 minutes before a workout, but we’d dispute the effectiveness of that.

The uptake time of Citrulline is roughly 45 minutes, so we recommend taking it around 30-45 minutes before your workout. If you’re using it as a pre-workout, this product can also be consumed during the workout as well – depending on your speed of intake.

If you’re chugging this product down, 30-45 minutes in advance is the way. This makes most sense with a workout carbohydrate, like cyclic dextrin, which improves performance during a workout when taken before/during training.

If you’re not bothered by stimulants, you could also combine this product with a regular pre-workout as well for some extra nitric oxide boosting.

What Is in Hype Reloaded?

So, we’ve already outlined the contents of this product, its label, and its use.

But what’s the value of Agmatine Sulfate? What about Glycerol Monostearate? For most people, these are just words that make this kind of product sound science-y. Let’s demystify these compounds: what can they do for you? 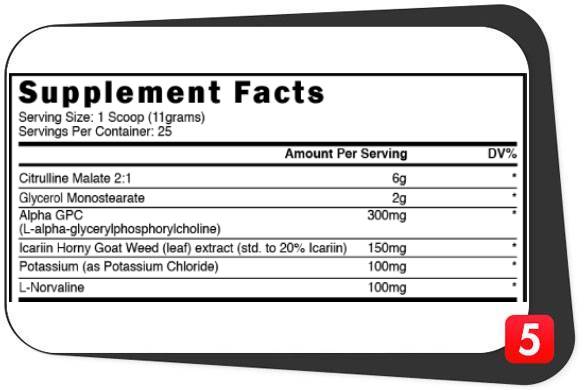 The things that are going to be good about this product come from the Citrulline Malate. This is the most important ingredient in Hype Reloaded and all the benefits you’re thinking about as pump-boosters come from here.

Nitric Oxide is a compound that is associated with the dilation of the blood vessels in the muscles and skin. Nitric Oxide (or NO) is important because it allows you to shuttle nutrients and oxygen to the muscles more effectively, which is the reason it improves the muscle pump.

Citrulline is perhaps the most effective nitric oxide booster around. See, serum arginine is the key to boosting your nitric oxide and improving pumps, as well as providing the muscles with the nutrients they need for performance and recovery.

The problem is Arginine sucks at getting into your system. Citrulline, however, boosts your serum Arginine levels far more effectively and thus improves your nitric oxide. This boosts pumps significantly, improves endurance, and may even improve recovery effectively.

The problem with Citrulline in this product is that it’s not dosed effectively. The single active ingredient we care about is under-dosed. Citrulline works best at 3-8g of supplementation, but this product’s serving size is 2g and you’re only meant to take it once a day.

That doesn’t make much sense to us, since there’s no risk of taking too much by using a bigger scoop. None of these ingredients are likely to cause any problems when double-scooping. It’s likely this product just expects you to take more than one scoop and they get to say there are “30 servings” per container.

That’s a bit grim: the size of a container is a significant problem for the cost, and a single serving by the label isn’t amazingly effective. You have two choices:

So, the citrulline is great but underdosed. What is this product making space for? Let’s dive into what else is going on in the background of this product to see whether it can redeem itself. If there are some amazing secondary ingredient choices, this could still be a good (if slightly disappointing) product.

Sadly, it doesn’t look that way…

Glycerol is cool because it’s an osmolyte: it increases the uptake of water into cells. By ‘drawing water into the cell’, it improves cell volume. This is a key player in the way that pumps work, and it’s one of the ways that pumps can improve recovery and muscle growth.

Glycerol supports this process and produces a more significant muscle pump, better growth, and better recovery. If you’ve paid attention, you’ll know that these are the cornerstones of better performance, strength, muscle mass, endurance, and every other goal you might have.

Glycerol is definitely a good choice, though it works better when combined with creatine. This would’ve been a pretty easy addition and we’re not convinced Glycerol alone is enough to make up for underdosed Citrulline.

It’s good, but it probably doesn’t make up for the other shortcomings by itself.

Agmatine is an odd choice for this product. While it’s a metabolite of arginine, it doesn’t function in the same ways as either Citrulline or Arginine. In fact, it’s not proven to be a nitric oxide booster at all.

It does have some other cool benefits: primarily for mood and depression-resilience. If it can help you combat anxiety and improve mood, that’s awesome. However, we’ve got to judge this product by the things it claims to be able to do, and the effects on nitric oxide are slim at best.

The best we can say about this compound is it can help reduce the breakdown of nitric oxide. This could be useful but it’s not going to make up for 4-6 grams of missing citrulline!

On top of this, Agmatine absorption is heavily dubious, and there’s a significant struggle getting Agmatine to cross cell membranes. This means that, even if you’re getting it into your diet, you’re not necessarily getting it into the muscles or brain.

This is a common compound for testosterone boosters, but it doesn’t have significant enough evidence to support this. It’s useful for boosting testosterone in lab animals but, as we know well, this doesn’t mean anything in humans.

The problem is that it’s an erectile aid and aphrodisiac, so you’ll likely feel more high-test, but you’re actually not. It’s not a clear booster of testosterone but if you’re struggling to get it up then maybe this is a beneficial product for you.

However, this is just another example of an ingredient that has no real relationship to the goal that Blackstone Labs sets out for itself. There’s only one part of your body that is going to see improved blood flow from this product, and it’s not your muscles or any of our business!

L-Norvaline is deep into the science of how pumps work. We’re impressed that a product with such little awareness and relevance to pumps would choose Norvaline as an ingredient.

To oversimplify massively, the presence of Norvaline is a steppingstone for your body producing the pump in the first place. It’s tied into the production of other steppingstone compounds, which makes it a pretty niche and interesting choice.

It’s theorized that this compound could help produce some versions of citrulline that are even more potent in the body. The problem is that there’s absolutely no real evidence out there to suggest the effectiveness of oral supplementation.

What we can probably say is that this compound – in the blood stream – helps keep pumps going. What we can’t say is that taking it orally helps that process: the evidence just isn’t there. Yet.

One to keep your eye on, however! This product has done nothing to convince us that it deserves all the emphasis that Blackstone Labs have put on it. The “cool” packaging and unnecessarily convoluted name don’t make up for a total lack of effective ingredients/dosing.

Everything in this product is either under-dosed, has nothing to do with nitric oxide, or is so far removed from conclusive evidence that it’s impossible to discuss. The end result is a product that you need to double-dose in order to gain benefits from the primary ingredient.

This is an odd set of choices and leaves us underwhelmed with Hype Reloaded. This product seems to be foreshadowing its nebulous, unclear purpose with its title. There’s more hype than actual effect in this product.

The verdict isn’t looking great for hype reloaded. We could forgive it if it was billed as some sort of “male performance enhancer” or something equally vague and ridiculous. However, it falls short on the very-testable nitric oxide booster title.

It sounds harsh, but this product just doesn’t live up to its own stated goal. If you’re going to make claims, you better back them up or you end up this situation where your product just straight-up fails at its only real goal.

Putting this product into the real world, rather than just looking at the formula, doesn’t help it.

There are so many better alternatives out there that out-perform this product across the board. We’d legitimately rather you bought a cheap, effective citrulline malate powder and used that.

The only people who should use hype reloaded fit a very specific niche:

We’re willing to bet this isn’t you, since it’s very niche. However, if these are all you then this product might finally have achieved some appeal!

The other side of this product is that, while there are minimal effects on nitric oxide, the ingredients are all safe and healthy. There are only two times you ever need to be concerned with safety and side effects: if you’re on any medications/have pre-conditions, or if side effects start to show up.

There aren’t likely to be any side-effects with this product but, as ever, if you respond badly then we always recommend stopping use. This is unlikely for healthy people, but remember it’s individualized and if you don’t respond well, that’s fine – see a doctor if you have any concerns or an adverse response.

The price really doesn’t seem justified to us, especially since it doesn’t live up to its own claimed effects.

This product is more hype than effect, which is characteristic of supplements that try so hard to seem hardcore. First impressions don’t tell you everything about a product, but this one wears its poor consideration on its sleeve.

We recommend giving this one a miss as the ingredients don’t seem to do much unless you burn through a container every 2 weeks or so. At any price, that’s a silly problem to have, and even more so since there are better and cheaper alternatives.

We’re underwhelmed – which is impressive since our expectations were already so low!