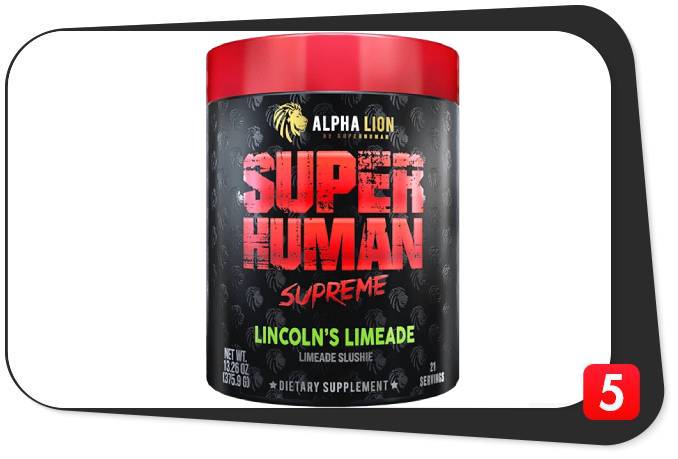 Alpha Lion is back with an amped-up version of their Superhuman pre-workout.

While we’re not really sure what was wrong with the original, it does give us a new product to review, which is always exciting. Will this new-and-improved option drive your workouts to a new intensity?

Find out in this review…

By increasing the dosage on some of their energy ingredients, and adding in one special treat, SuperHuman Supreme is next level.

It claims the “most anabolic workout experience of your life”, which, if I’m honest, is a high bar for someone who trains like an animal. But their label says it’s a high-energy blend complete with a strong pump and ingredients for strength and focus.

The flavors, Lincoln’s Limeade and Patriotic Pineapple, sound tasty, but you need something that works.

Let’s find out of Alpha Lion fits the bill. 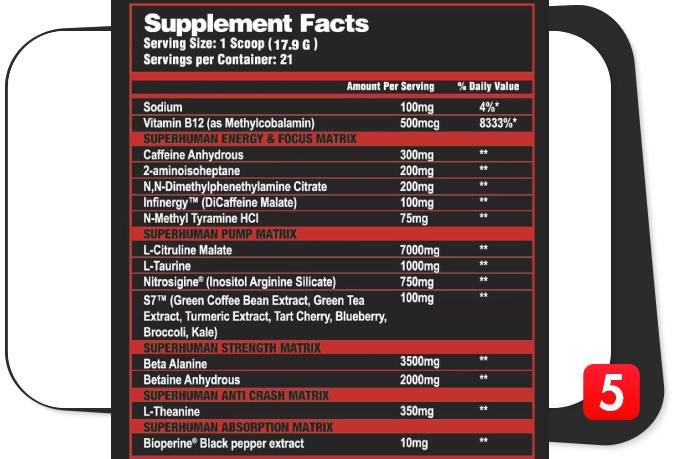 For your nerve cells, this means it helps them fire signals off to working muscle. As long as athletes get enough water, sodium intake is paramount to fluid balance.

1000mg of sodium not only helps hydration, but it also contributes to flavor.

On its own, vitamin B12 regulates red blood cell growth, nervous health, and energy levels. It  connects with folate and vitamin B6 to run fat and protein metabolism as well. In general, a diet strong in b-vitamins keeps us feeling energized throughout the day.

Why included it in a pre-workout? Outside of energy, B12 modulates homocysteine levels by converting the amino acid back to methionine. Homocysteine is produced by the breakdown of protein, and methionine controls protein synthesis.

As research shows resistance training reduces plasma homocysteine levels on its own, heavy strength sessions already work in your favor. But taking vitamin B12 could help stimulate protein synthesis if your levels are low.

Caffeine is king when it comes to workout performance. Outside of obviously giving you energy for your 5 AM lift, it’s been studied over and over again as an ergogenic aid. Pre-workout caffeine is associated with increases in maximum strength, endurance, and power output.

Research shows around 6mg/kg is ideal, but everyone responds differently. Because of the individual variance, anywhere from 3-9mg/kg has proven effective. If you’re sensitive to caffeine, larger doses might make you jittery. If it does nothing for you, you’re going to need a heavy dose.

SuperHuman Supreme contains 400mg total, so you can do the math. The difference here is the combination of caffeine anhydrous and dicaffeine malate. The first is a potent form of immediate energy, while the latter provides extended release stimulation.

2-aminoisoheptane is marketed as a safe stimulant that acts like amphetamine. By recreating the adrenaline response, it definitely gives you the energy to go hard. However, it’s likely dangerous and not worth the health risk.

According to NSF, a nationally-recognized third-party lab that assesses safety risks, “”2-aminoisoheptane” appears to be a new disguise for illegal or unapproved synthetic stimulants like DMAA, DMBA, 2-amino-5-methylhexane and 2-amino-6-methylhexane.

While “2-aminoisoheptane” is becoming increasingly popular in weight-loss products, the research team sees no evidence that it is a legitimate dietary ingredient derived from plants.”

It doesn’t matter how big and strong you are if your health is at risk.

Another chemical relative of amphetamine, this ingredient comes as an addition to the Supreme version of Super Human.

It’s obviously intentional, giving that extra “kick” that some bodybuilders crave. It works by increasing dopamine and norepinephrine. However, it’s on the US Anti-Doping Association’s list of banned substances, meaning you can’t use it in any Olympic sport.

N-Methyltyramine HCL is a compound derived from tyrosine. It was originally isolated from the barley plant, and therefore sold as a plant-based, natural ingredient. (Interestingly enough, as a barley-derivative, it’s also found in beer).

Considered a stimulant, there’s actually not much research behind its efficacy. Supplement companies such as Alpha Lion include it because of the chemical similarities to DMAA. Unfortunately, no one’s really sure if it’s that effective.

Regardless, it’s still on the FDA Advisory list, meaning they’re watching closely for any negative side effects.

Citrulline acts as a precursor to the amino acid arginine. As any avid supplement consumer will know, arginine contributes to nitric oxide, the ever-so-coveted compound for blood flow.

Part of warming up for your workout is getting the blood pumping. Citrulline helps stimulate that pump naturally by helping generate arginine (and this nitric oxide) in the kidneys.

As part of their Pump Matrix, taurine is featured in Alpha Lion SuperHuman Supreme because it induces vasodilation.

When injected into rats, in fact, taurine induced hypotension, or really low blood pressure. It’s thought to do so by acting on GABA receptors, which usually respond to neurotransmitters and inhibit excitatory activity.

As such, taurine also comes with a calming effect to counteract anxiety (and possibly contribute to the crash).

Nitrosigine is a brand-name concoction of arginine, inositol, and potassium silicate.

We already covered the purpose of arginine above, but inositol and silicate make it more effective. You see, supplemental arginine on its own basically goes right through you. Your digestive system doesn’t absorb it well.

However, combining it with silicate (and stabilizing the compound with inositol) improves uptake into your bloodstream. In one study, blood plasma arginine levels increased up to 6 hours after ingestion of the compound, compared to regular arginine, which caused just a slight increase for less than an hour.

S7 adds another brand name to the mix. FutureCeuticals created this blend by combining extracts from green tea, green tea, and turmeric with tart cherry, broccoli, blueberry, and kale.

While a cool blend of some evidence-based stuff for general health, it’s unclear what benefits are in a pre-workout. Green coffee bean provides a denser stimulating effect than its roasted counterpart, as roasting burns off some of the caffeine. Green tea extract is known to help burn fat.

The other ingredients, on the other hand, are best known for their actions to counteract inflammation and assist in recovery.

When combined with the amino acid histidine, beta alanine helps form carnosine, something your muscles need to buffer out lactic acid.

Research shows that a high concentration of intramuscular carnosine increases lactic acid tolerance and time to fatigue. While your body is chock full of histidine, beta alanine tends to run short. As such, it’s the rate-limiting factor in carnosine production.

Supplemental beta alanine can improve carnosine concentration up to 14%, but you’ve got to take it for weeks at a time. One dose of 3500mg before your workout won’t yield immediate effects. Take it every day, however, and you might see improved muscular endurance next month.

Betaine is starting to make waves as an ergogenic aid. Originally found in beetroot, it’s been associated with both a bigger bench and larger arm circumference. As more betaine equates to less homocysteine, there’s a theory involving increased protein synthesis.

Some experts speculate that betaine can also improve nitrate concentration in the blood, thereby stimulating blood flow. But all of these have yet to be affirmed in the literature. While we might not know how it works, it’s generally safe, so is probably a fine ingredient to include.

L-theanine helps calm you down when under stress. Especially when combined with stimulants (which this supplement isn’t short on), it relaxes your nervous system and improves attention. Alpha Lion includes it as an “anti-crash” mechanism, claiming it’ll counteract the negative effects of too many stimulants.

Much like adding salt and pepper to a meal enhances flavor, black pepper extract elevates supplements. It helps your body absorb everything else to maximize effect. 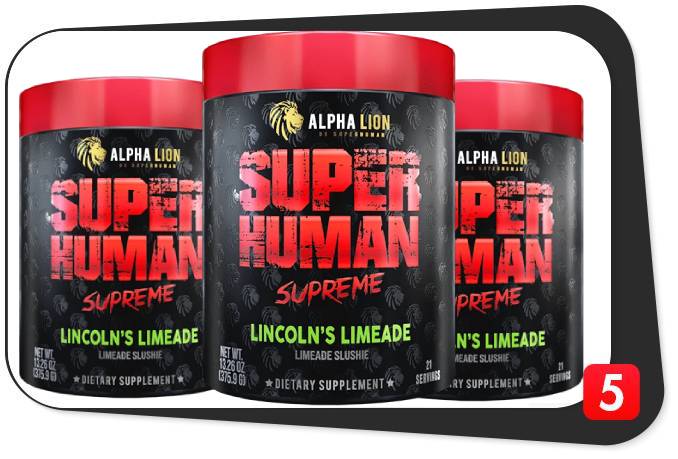 If you exist on a constant stream of stimulants and have run out of pre-workouts that affect you, try SuperHuman Supreme. It’s got a very strong stimulant profile, but it definitely borders along the edge of dangerous. Caffeine works great, and it’s dosed appropriately in anhydrous and dicaffeine malate.

Furthermore, you get caffeine from green coffee and green tea extract. After that, however, you’ll find three ingredients that have either been banned by anti-doping agencies, or are on the FDA’s short list.

We’re of the mind that long-term health trumps the immediate benefits of a stimulating pre-workout.

Other than that, the combination of citrulline and arginine silicate makes for an effective pump without niacin, which most other companies include. That’s one way to avoid the flush and tingling. Beta alanine is also an awesome performance-enhancer, but it takes a while to work…

…And we’re not confident taking it every day for months is worth it, given the stimulant risks.

Definitely bodybuilders. The website claims you’ll even get accused of “not being natty”, which is a term widely-used in physique competitions. Even if you aren’t training for a show, it’s made for lifters who just want a massive, stimulating pump to get huge.

S7 actually adds a lot of natural benefits, as does sodium and vitamin B12. These ingredients can be taken regularly to promote general well-being. SuperHuman Supreme will provide the pump most people crave from a pre-workout, while making you feel like you’ve got the strongest adrenaline rush ever.

As of this writing, you can purchase a 7 serving sample tub for $14.95 on their website. We haven’t seen it available on Amazon or in retail stores such as GNC.

I, personally, would not take this pre-workout.

There’s just too many unknowns and risks for me to feel comfortable. Plus, there’s a balance between “feeling energized” and “feeling overwhelmed and anxious”, and this crosses it for me. But, if you’re a bodybuilder who’s used to these ingredients, it might work for you.