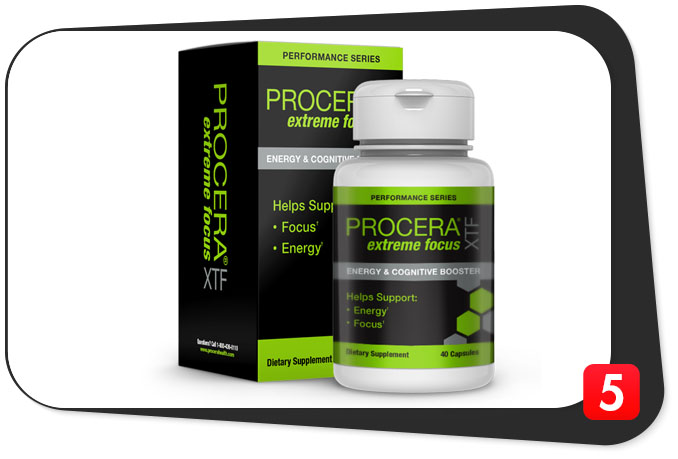 What does “Extreme Focus” mean to you?

And, if we’re keeping it real, extreme focus means a highly stimulated brain… usually from big doses of caffeine.

Procera XTF uses caffeine, and has “Extreme Focus” right on the box… but don’t believe the hype. It’s OK for brain health, but this mild formula is nothing to get pumped up about.

*Note: Some Procera XTF boxes show double these dosages and double the serving size: 4 capsules a day. This is weird to us: Taking 4 caps daily, you’d burn through a whole bottle in only 10 days.

Procera XTF Extreme Focus supplies some good nootropics… but it just can’t decide what it wants to be.

Damned if we know… and we don’t think Procera XTF knows either. Still, there’s some brain health value here… so let’s dig into the formula’s ingredients:

Hmmm. The whole Extreme Focus Blend adds up to a 40 mg of natural caffeine and an unspecified amount of Rhodiola. Weak. And BORING!

Editor’s Note: Best5 dislikes caffeine nootropics. BUT, we do like that Procera XTF uses herbal caffeine. It means you get other organic compounds that may work with caffeine–like caffeine-rich guarana, shown in some research to be more stimulating than plain caffeine alone.

The original Procera AVH is a decent 3.5-star brain supplement that lost some points for bad ethics and limited scope of nootropic activity.

(Check out our Procera AVH vs. Procera XTF review here)

Of the new ingredients in XTF, Vitamin B6 and Rhodiola are viable upgrades for mood balance, brainpower and stress resistance. But they use inferior B6 and hide Rhodiola’s dosage, so we can’t know if it’s enough to work.

Green coffee bean fails. It makes XTF’s formulators look bad, because green coffee is light on caffeine, and is not a nootropic–it’s for weight loss!

Procera XTF’s other sources of caffeine look OK, but the 40 mg total caffeine dose will be roughly useless to regular coffee drinkers with tolerance.

Make up your mind, Procera XTF!

Procera XTF claims to be a safe, effective alternative to the “caffeine blues” and “artificial high” of stimulant-driven energy drinks. But Procera XTF is made with caffeine! It’s also called “Extreme Focus,” but the only extreme ingredient is caffeine… which has a mild 40 mg dose. Hey, Procera: Either BE extreme, or change your formula name!

Procera XTF Extreme Focus is billed as a naturally derived “energy booster” formula that includes Procera AVH brain nutrients. The two main benefits advertised are focus and energy; secondary benefits are enhanced mental performance while under pressure and better stress resistance. All this culminates in what they call a “special cognitive edge.”

These claims actually check out… except for the “special cognitive edge” part (go for a balls-out mental domination stack if you want a cognitive edge). We are critical of Procera XTF’s formula flaws. But the AVH stack is tried and true, 40 mg caffeine gives it a little extra pop, and there’s nootropic value in the Rhodiola and B6. We figure Procera XTF delivers a mild increase in brain energy and focus… but no extreme brainpower boost here.

Procera XTF Extreme Focus seems to target younger people who drink too much coffee and energy drinks; people who want to try something different to perk up their mental energy and alertness. Some Procera XTF boxes say it’s a “study aid” that’s “University Tested,” suggesting it’s made for students.

Probably not. You’d expect an “Extreme Focus” formula to have all sorts of side effects, but Procera XTF just isn’t that powerful. The 40 mg caffeine dosage is likely too small to even cause jitters.

Procera XTF is not as good as Procera AVH. It adds B-vitamins, rhodiola & natural caffeine… but halves the formula’s best nootropics (the “AVH”) to get there.