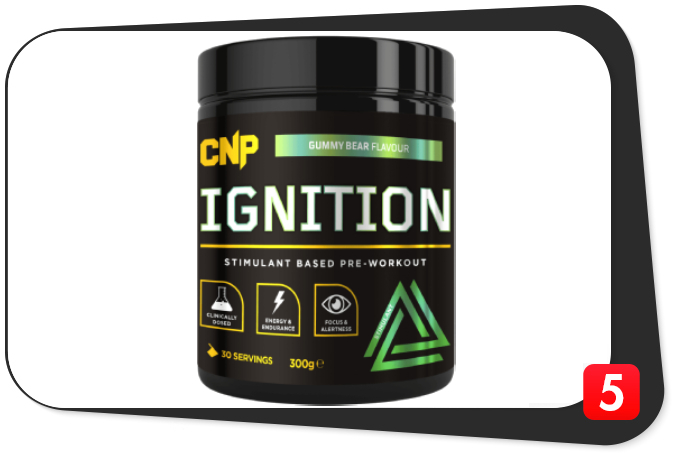 Stimulants are the name of the game in pre-workouts. So much so, that it’s hard to find supplements without them. Regardless of the ingredient list, a pre-workout should give you the extra energy boost you need before hitting the weights. Secondary effects include blood flow, focus, muscle-building, and muscle recovery.

CNP gives us Ignition as part of their pre-workout tri-series to maximize performance.

Based out of the UK, CNP Professional supplements has a 20-year history of delivering nutrition to athletes. They claim to provide “cutting-edge, premium formulations” that their “in-house team of scientists and expert nutritionists are continually reviewing and analysing”. Ignition is their newest offering in an attempt to provide something completely new.

With this tri-series, they state athletes will be able to pick and choose what they need for performance, or combine all three for maximum potential. Let’s see where Ignition fits in to that mix.

The ingredients behind CNP Ignition are as follows:

And now, we break each substance down to see what it can do for you.

Betaine is a compound originally discovered in sugar beets. In plants and animals, betaine synthesis evolved as a measure of protection against extreme stress. Therefore, it helps water retention in cells and facilitates continued metabolic activity. Injection of betaine in to healthy animals raises a metabolite involved in protein synthesis, creatine, adrenaline, and more.

After two-weeks of 2.5 betaine supplementation in 13 adult men, muscle tissue oxygen saturation decreased compared to placebo. Theoretically, this suggests that betaine helps your muscles use oxygen. As oxygen is a huge tool for aerobic metabolism and cleaning up anaerobic metabolites – that’s a great thing. Betaine also increased the number of bench press reps they could perform. But this is only a small result in thirteen people, so take it with a grain of betaine salt.

Theanine is an amino acid known for its relaxing properties. While it makes sense to include it as part of a stack, it doesn’t really scream “Ignition”. It’s more like cruise control. There’s been some research that combining theanine with caffeine elevates intent and focus, which matches this formula. But CNP already has a product for that – Cognition.

Beta alanine supplementation proves effective in the long term. As a pH buffering agent, it helps shuttle lactic acid out of the muscles by forming carnosine. Studies show that 2.5g/day helps elevate muscle carnosine levels at least 14%, but that’s with four weeks of loading with smaller amounts throughout the day. Other research necessitates a loading phase of four to eight weeks to reap the fatigue-fighting rewards. So while the dose is appropriate here, you’ll need to take it for at least a month (and train hard!) before seeing any real benefits.

Side note – beta alanine is often associated with paraesthesia, or tingling in the limbs. It’s a potential negative side effect to consider at higher doses.

Huperzine A comes from the plant Chinese club moss, and it’s known in Eastern medicine as a brain-booster. It enhances acetylcholine levels, allowing the neurotransmitter to do its job more effectively. Theoretically, huperzine A would limit depletion and therefore improve time to fatigue. However, these direct results are highly-understudied.

Caffeine is one of the most effective and studied pre-workout ingredients. Anhydrous just means they’ve taken the water out, and dicaffeine malate is a salt to increase absorption. The two combine for a pretty-potent per milligram effect.

However, if you’ve had 1 cup too many of coffee before, you’ll know what happens when you have too much of a good thing…the dreaded jitters and energy crash.

It’s for this reason that we prefer drinking coffee for our caffeine hit. There’s usually too much caffeine packed in pre-workouts. Which, in our honest opinion, is the case here.

EnXtra is the name brand for alpinia galanga extract. According to research, adding this ingredient to caffeine helps sustain energy for up to three hours, limiting the stereotypical energy crash. The formula behind EnXtra is still patent-pending, so we’d like to wait and see before making any definitive statements.

In another absorption effort, AstraGin combines two compounds, Panax notoginseng and Astragalus membranaceus. The former is known to protect against memory loss and brain degradation, while the latter can fight inflammation and improve your gut health. Both are touted in this supplement as absorption agents. Black pepper itself is pretty powerful in that regard, so AstraGin’s necessity is questionable. However, it likely won’t hurt you, and it could help overall health. 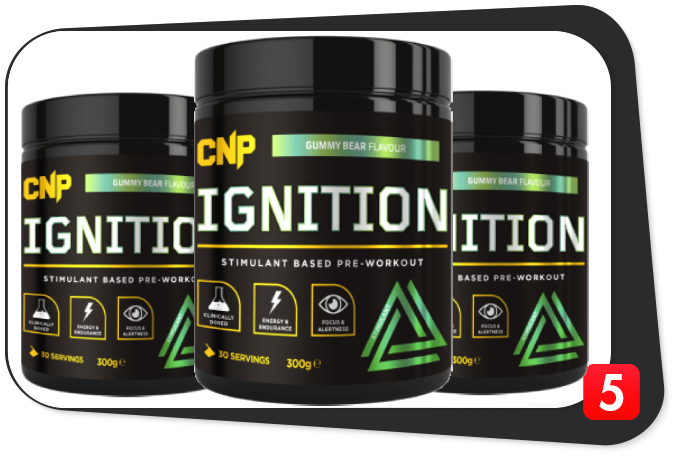 The highlight of CNP Ignition is easily the caffeine amount. It would take around five shots of espresso or three cups of coffee to get the same. Using caffeine anhydrous, dicaffeine malate, and alpinia galanga extract all-but-guarantees you’ll feel alert. The dosing is perfect for almost everyone to improve strength, power, and endurance performance.

Those who don’t respond well to caffeine have theanine to fall back on, but for most, theanine will just enhance focus.

Beta alanine’s addition comes in the right dose, but don’t expect immediate results. It’s an ingredient that requires loading, which is possibly by design. Why not add something that requires you to buy more of their product? Huperzine A and betaine are both understudied with mixed results.

EnXtra hasn’t been peer-reviewed at all, and AstraGin is probably unnecessary.

No one, yet. CNP Ignition has yet to be released as of this writing, but it’s tailored toward athletes and serious gym-goers. It was developed by a bodybuilder, so you can count that population as a target.

A quick peruse of their social media shows already fit figure competitors, CrossFitters, boxers, and personal trainers. It doesn’t look like this is a pre-workout designed for the casual exerciser. If that’s you – stick to your morning coffee, eat well, hydrate, and stay consistent in the gym. That’ll give you more results than anything.

High doses of certain ingredients in CNP Ignition are associated with the following:

CNP Ignition, however, doesn’t cross the limits on those compounds. However, if you know you’re particularly sensitive, talk to a physician before taking any supplement.

Now that we’ve covered the ins and outs of CNP Ignition, what have we learned? Here are the pros, cons, and how much you’ll spend on their product.

After its release, you can buy CNP Ignition for £24.99 from their website.

CNP Ignition as potential as part of a series. Its ingredient list is actually pretty strong, and the dosing is appropriate. By adding it to Cognition or Expansion, it could really change your physiology before a workout. But it’s possible to get more tailored results by switching out a few ingredients.

Overall, we appreciate that they exclude any banned substances. That’s a rarity in the pre-workout world.

Yes, caffeine is a stimulant, but it’s one of the safer, more evidence-based versions. If you are a regular coffee drinker, you’ll do well with CNP Ignition.

However, it’s cheaper to grab an espresso and take sodium bicarbonate – you’ll get the same energy and fatigue-busting effects.

But if you have a hard time focusing, care about your neurological health, and don’t have issues finding the motivation to work hard, CNP Ignition works. It’s not the best pre-workout out there, but it’s definitely not the worst.

If you’re looking for the best, you can check out the top rated pre-workout supplement that we’ve tried here.