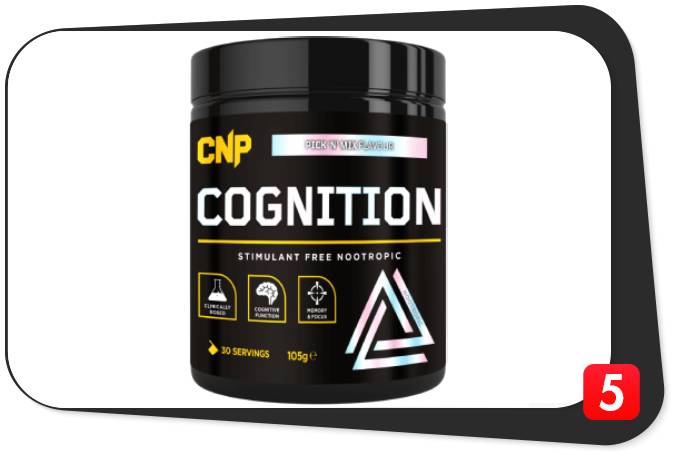 The CNP supplement brand is launching a tri-series of pre-workouts for enhanced performance. Designed to work in tandem or apart, the first release targets the brain, leaving the others for more conventional pre-workout duties. In this review, we’ll look at the ingredients, benefits, side effects, and more of CNP Cognition..

CNP Cognition promises full-body hydration, a stimulant-free mental boost, enhanced memory, mood, and attention, and overall defense against fatigue. Joining the rest of their supplement line, this nootropic claims science-backed ingredients for premium sport performance. And for good reason – the company was founded in 1998 by a bodybuilder.  Interestingly, it’s marketed as a pre-workout, when nootropics are beneficial any time of day. Regardless, they’ve been around the game for a while, so let’s see how CNP Cognition stacks up.

As a form of the amino acid carnitine, Acetyl-L-Carnitine is more available for absorption in the gut. Within the body, it shuttles fatty acids across mitochondrial membranes where they can be converted to energy. This not only supplies energy for cognition, but breaks apart an acetyl group for later use. Those molecules can later join choline to form acetylcholine, a neurotransmitter.

Evidence suggests that supplementing with acetyl-l-carnitine elevates brain function in early stages of Alzheimer’s. It’s also been used to fight against depression in older individuals. While it’s not exactly clear how these results come about, it’s still a good nootropic solution.

Phenylalanine a the rate-limiting amino acid for catecholamine synthesis. Epinephrine, norepinephrine, and dopamine all promote quick-thinking and adaptation to stress. However, phenylalanine is essentially useless to catecholamines in the presence of enough tyrosine, as that’s the preferred substrate. As this supplement also features tyrosine, we’re wondering why this is in here. Furthermore, high levels of phenylalanine have been associated with brain toxicity.

Cognizin is a brand-name, vegetarian, water-soluble version of citicoline. By providing building blocks for phosphatidylcholine and acetylcholine, it helps improve attention, focus, memory, and overall brain power. Phosphatidylcholine forms the chemical structure of cell membranes. Acetylcholine, on the other hand, is an important neurotransmitter that regulates brain activity.

Research proves citicoline’s neuroprotective qualities in the fight against dementia or stroke.

Sustamine is another brand-name ingredient that combines glutamine with alanine. These two substances are typically associated with athletic performance, not brain power. Both glutamine and alanine can decrease muscle damage and facilitate post-workout repair.

As a nootropic, however, glutamine provides the base for both glutamate and GABA. It’s the most abundant amino acid in your body, however, so you likely have enough for normal function. It’s when life gets really stressful that glutamine becomes conditionally essential. Alanine, on the other hand, comes with mixed results. Consider this study that showed it didn’t help cognition in soldiers, or this one that showed no significant cognitive benefits in cyclists.

Magnesium works with signal transmission to certain receptors in your brain. As an NMDA antagonist, it actually blocks certain signals from being sent, such as ones that can cause pain. Recent studies in rodents and humans show that it might have an antidepressant role. Magnesium is also an electrolyte, so this is the hydration element.

Tyrosine is a common addition to nootropic supplements for its role in catecholamine synthesis. As you might remember from a few paragraphs up, it helps produce epinephrine, dopamine, and norepinephrine. As such, it’s designed to clear thinking and improve focus during cognitive stress. Some research even shows that it’s helpful against depressive states.

L-theanine works like meditation for the mind. It helps keep you calm and focused by modulating alpha brainwaves. Therefore, it keeps your thoughts from jumping all over the place, especially in stressful or anxious states. When combined with caffeine, it raises alertness and improves overall cognitive performance. Finally, as a relaxing agent, research shows theanine increases levels of dopamine, serotonin, and GABA within the brain.

By including phosphatidylserine, CNP Cognition goes straight to the source. Rather than add another metabolite (like citicoline), phosphatidylserine is the complete structure in the lipid bilayer of brain cells. Therefore, it helps with neuronal repair, regeneration, and electrical communication.

Combined ingredients have been shown (in studies largely run by the parent company) to increase absorption of vitamins, amino acids, and other nutrients. If the ingredients positively impact gut microbiota, than these results are highly plausible. However, so do pre and probiotics, and those have a lot more research behind them.

DHA, or docosahexaenoic acid, is a fatty acid found in fish oils and other sources of omega-3s. Extensive research has proven its benefits for brain health and central nervous system development.  Primarily, DHA shows antioxidant properties, impact on neurotransmitters, and interaction with brain-derived neurotropic factor. It’s widely considered one of the most important nutrients for brain health. Recommended doses tend to be 1000-3000mg per day, but 50g of DHA is at least a start.

Vitamin B12, also known as cobalamin, plays an integral role in metabolism and DNA synthesis. By helping the metabolism of fats and proteins, vitamin B12 indirectly feeds the brain, which contains more lipids than most other areas of the body.

An ingredient from Chinese club moss, huperzine A has been used in Eastern medicine for years. Recent research showed improved cognitive performance and memory in teenagers with four weeks of huperzine A supplementation. In addition to a memory boost, huperzine A influences acetylcholine signaling. It inhibits the breakdown of the compound, so allows for higher saturation within the brain. As we’ve already been over, acetylcholine helps us with focus and neuroplasticity. Therefore, supplementing huperzine A at 50-200mg can upgrade cognition. 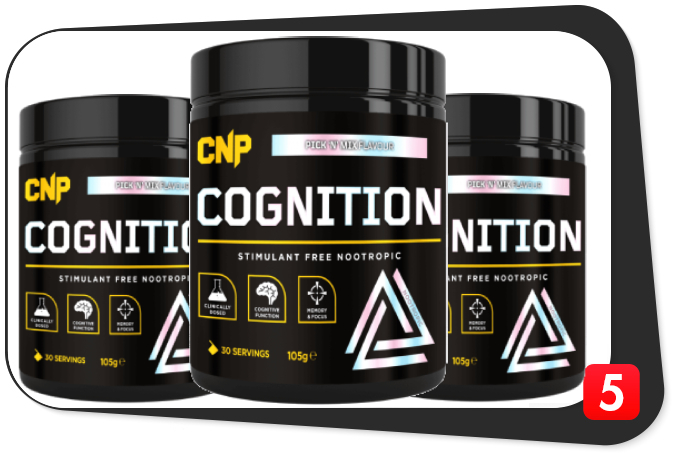 First and foremost, the ingredients in CNP Cognition are generally considered safe. That’s a huge positive in the supplement world. Phenylalanine does come with risks, but not necessarily in healthy adults, and definitely not at this dose.

A few ingredients are slightly underdosed – phosphatidylserine, citicoline, and DHA, specifically. While the intentions are there, it’s unlikely these ingredients will have the promised effect. Moreover, they include phenylalanine as a basically wasted ingredient. Added atop tyrosine, it’s ineffective in catecholamine synthesis.

On the flip side, tyrosine, theanine, and acetyl-l-carnitine are great additions. We love that they use naturally-derived nootropics such as huperzine A and the AstraGin combo. Finally, the lack of stimulants or banned substances gives CNP some extra points.

CNP Cognition promotes calm, clear, and focused cognition. Its magnesium content aids in hydration, as the Institute of Medicine recommends 300-400mg for adults. Overall, regular use of this supplement can protect your neurons, facilitating brain health in the long-term.

It’s marketed towards athletes, bodybuilders, CrossFitters, and the general population in the UK. With no official reviews on their website, it’s tough to know what people are saying. But to be fair, it’s fresh off an August 2019 release. Basically, anyone looking to improve their brain power can take it.

Potential Side Effects of CNP Cognition

A few ingredients have side effects at much higher doses, but CNP Cognition does well to keep below negative amounts.

CNP Cognition Price & Where to Buy

We couldn’t find CNP Cognition on Amazon or GNC. But it is now on sale for £26.99 on their website.

It looks like CNP wants you to buy all three of their tri-series blends, which is maybe why they included lower doses in Cognition. Which is why it doesn’t beat our favorite all-in-one nootropic, Mind Lab Pro.

For that purpose, it’s a smart business move – like Apple manipulating things so you need to buy more of their own products. But as far as our opinion goes, any supplement should be scientifically-proven on its own. And CNP Cognition falls a bit short.