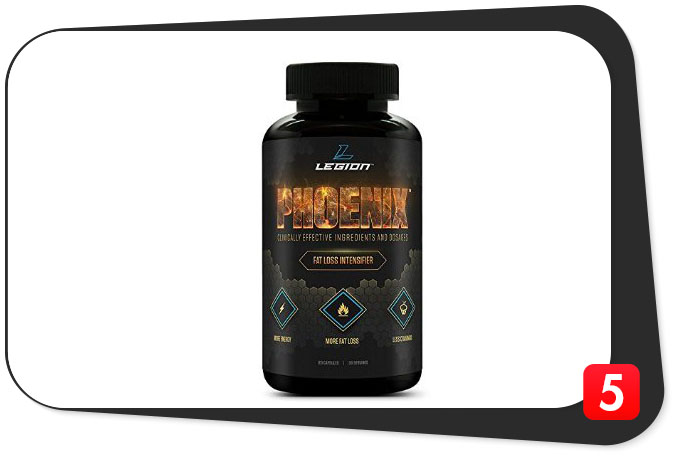 This isn’t a review on Mythical Mycenaean Greek Ornithology. This is a Best5 fat burner review.

And with so many crap burners on the market, reviewing weight loss supps is tough business.

Yet, every now and again, a day comes when a new fat burning product arises from the ashes of its predecessors. Lifting its flaming wings to spark new life into the weight loss industry for all the gym BROs and BROETTEs. And right now that fat burner is… Legion PHOENIX.

…Shit. We just used a phoenix cliché, didn’t we.

It’s all good with a product this great. Read on to learn why Legion PHOENIX has earned our #2 Best Fat Burner Supplement ranking.

Legion PHOENIX is a natural*, caffeine-free fat burner formulated by pretty boy Mike Matthews, founder of Legion (*This depends entirely on your opinion of synthetically-derived compounds from “natural” sources). Matthews boldly states that this fat burner beats the rest, both in its ingredients and transparency. Sort of a dickhead statement… unless, of course, the formula can back it up. Formula notes:

Legion claims to show the science on their website, but let’s take a look for ourselves:

Synephrine is a chemical compound found in certain citruses (citri?). Despite the bitter orange controversy, research suggests synephrine helps increase basal metabolic rate (that is general fat burning) and the “energy cost” of metabolizing food—however, those effects amplify when mixed with:

Hordenine, Epigallocatechin Gallate EGCG, and Salicin offer protection against adrenalin-killing enzymes and ephedrine-inhibiting prostaglandins (this is especially important for the synephrine in this formula).

Other benefits include: Increased fat burning energy (from the adrenalin), decreased abdominal fat (when coupled with exercise), and anti-inflammation.

Needless to say, The Avengers got nothing on this Super Heroic STACK.

Additionally, this formula is CAFFEINE-Free.

Just drink that in for a second…

In a supplement genre that almost runs synonymous with “caffeine,” Legion PHOENIX has none. Legion recognizes the synergistic effects of mixing fat burners with caffeine, yet what they’re offering here instead is a choice: Burn fat with a side of coffee or escape the buzz altogether with water?

Odds are you’re already getting enough caffeine, so the fat burning synergy won’t be missed anyways.

If you haven’t figured it out yet, we like Legion PHOENIX. It’s rare that a supplement backs up its claims—with both its formula and the science behind it—and PHOENIX does exactly that. Here are its benefits:

Legion PHOENIX purposefully avoids the “EXTREME” association of most fat burners, which is seen not only in its formula (no caffeine) but in its branding. They boldly claim:

“While everyone claims to have the best fat burners on the market, we believe we can actually back up such a claim with real science and real numbers. Compare the PHOENIX formulation to any other fat loss product on the market, and it’s easy to see how inferior our competition really is.”

Essentially, Legion takes a serious, scientific approach to reach out to consumers who are serious about their supplements… seriously.

Not likely. While synephrine is not ephedrine, it is ephedrine-like, which gives it stimulant-like qualities. The subsequent boost in heart beats might affect sensitive users—however, the amount of user complaints is very low.

Considering the lack of caffeine, PHOENIX doesn’t look like an over-stimulating supplement. Consult with a physician if you’re still concerned over the synephrine.

Legion also includes a “60-day money-back guarantee” with all of their products.

As far as fat burners go, Legion PHOENIX goes pretty far. Both its formula and branding set a high standard for supplements that’s tough to surpass (though we hope many manufacturers do). If synephrine isn’t your thing, then that’s PHOENIX’S only setback. Otherwise, this is one hot supplement to look out for.