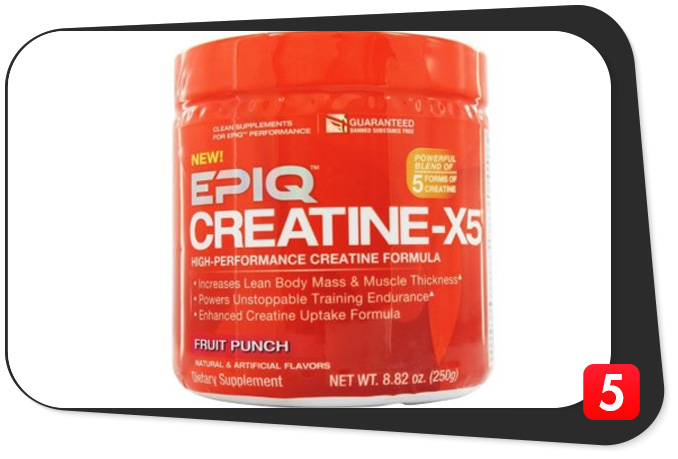 When you think of ingredients that can complement creatine, you would most likely think of absorption boosters. There are many ingredients out there but surely you wouldn’t add something weird like, say, Fenugreek, right?

The guys at EPIQ sure did when they came out with CREATINE – X5. We kid you not, they really did add Fenugreek on a creatine blend. Yeah, talk about lifting while in the mood.

Was this a good decision? Let’s find out in this review.

EPIQ’s CREATINE – X5 may seem like any ordinary creatine blend but our researchers would never have considered reviewing it if it was “normal.” No, this one piqued our interest because of adding unusual ingredients and labeling them as uptake boosters. We sure hope this product won’t be an EPIQ fail. Formula notes:

The theory behind CREATINE X-5 is utilizing insulin sensitivity to increase creatine absorption without ingesting large amounts of simple carbs. The ingredients used were meant to reduce the amount of creatine in your blood and instead place them where they should be: your muscles. Too bad the doses are way off. Let’s break down the ingredients in this formula:

CREATINE X-5 could sure use more doses.

Here’s the thing: CREATINE X-5 had all the right ingredients but not the right dosages. The multiple-creatine blend, while pretty trendy nowadays, lacks that oomph in dosage. Come on, not even two grams?

Their uptake blend is the same story. All three ingredients passed the “science says it works so we added it” test but EPIQ needs to read the fine print on what science said, particularly on just how much they should add in their formula.

The angle on boosting insulin sensitivity to increase creatine absorption is sound and grounded on great evidence but the execution just didn’t catch fire with dosages provided to CREATINE X-5. The lack of dosing made this practically an EPIC fail.

The X-factor is that amplifier blend. If it helps the formula’s nutrition to act like it’s more concentrated and powerful (which I kinda doubt), then the lower doses might not seem so bad.

Creatine, no matter what form it takes, is credited for endurance, power output, and recovery benefits. With that said, we’re not sure just how much of a boost you’ll feel given the less than desirable dose. Will the uptake blend help? Only your body can tell you that. So I say, take it pre workout and monitor your muscle performance. Gauge your strength. When looking at exotic ingredients like in this formula, there’s a risk-reward issue — you may see results that others do not.

Probably for the adventurous bodybuilding types or those who heard about the benefits of boosting insulin sensitivity. Also for users who won’t mind doubling or tripling the scoop for maximum benefits.

One serving shouldn’t have any side effects but double or triple that and you can say hello to your old friend Mr. Bloats.

The formula provided by EPIQ on CREATINE -X5 is founded on sound science. It may look weird at first but the ingredients added to support creatine uptake really works…if properly dosed. Do we recommend it? Not really, that price is too steep even for experienced users and tripling the dose, to really feel the benefits, would make it too expensive — hence the middle-of-the-road rating. Still there is some quality formulation behind this creatine product, and we appreciate their innovative approach.