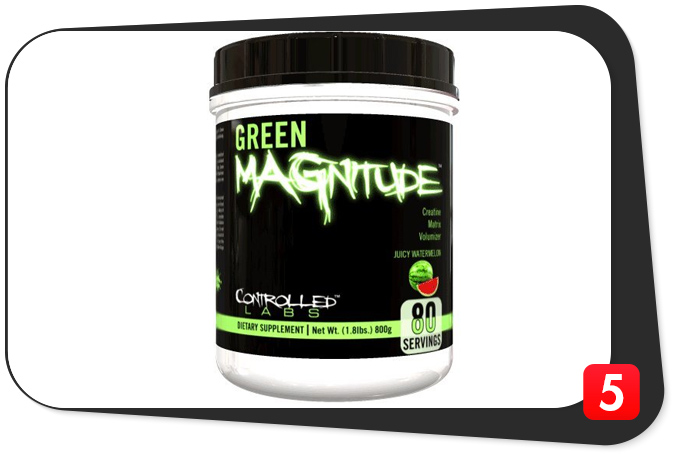 We reviewed Controlled Labs’ Green Bulge last time and we rated it as a fast acting type of creatine blend. We later found out they based Green Bulge off of a traditional predecessor in the form of Green Magnitude.

We scored Green Bulge pretty well last time but we wonder if Green Magnitude will be just as good or maybe even better than its quick and efficient little brother. There’s only one way to find out!

What we initially like about Green Magnitude is the design. It’s not every day you see a creatine blend focused on being green. Most are either shades of primary colors so being green makes Green Magnitude stand out. Now if only the letters were glow-in-the-dark. Formula notes:

One scoop of magnitude 9.5 lifts, please!

We’re a fan of innovations and all but there’s something about being retro that you just can’t let go. Green Magnitude is every bit like an old friend in the gym but just really green. Let’s break down the ingredients in this formula:

If Green Bulge was all about speed, Green Magnitude is all about raw power.

Let’s talk about the creatine blend first. Like Green Bulge, Green Magnitude also made use of the same mix but with twice the dosage. We figured the reduced creatine dose Bulge used was due to two things: Pricing and Absorption.

The creatine forms used in Bulge ain’t cheap and the added cost of encapsulation would probably tear away from the company’s earnings if they didn’t reduce the dosage. Totally understandable but when it comes to creatine supplements, you simply see the value in the dosage, not the medium. So kudos to Green Magnitude.

Betaine and Taurine are known for their performance benefits specially when it comes to NO-powered pumps. At 2000 mg each, you just can’t say no to that brother! Tyrosine is a wildcard ingredient and it’s a good addition specially when it makes you more determined to take one more rep instead of taking a break early. Form is wanting but hey, it’s a wildcard so we can’t really complain.

What we like here is the amount of sets you can do in one training day. You could probably taste the performance with each scoop, you know? It’s got the perks of good ‘ol creatine when it comes to gains, lots of good pumps, and a feel-good twist.

It’s a standard formula so we imagine it can fit into pretty much any lifter’s stack of the month. It can be for the newbies afraid to try something too complex or for the oldies who are cycling their stimulants or looking for a good stack to build on.

Creatine is known to cause bloating and by bloating we mean you want to puke like you drank too much kind of bloating and this could be a problem when lifting max after max. Thankfully, Green Magnitude used the forms with a reduced-bloating benefit so maybe the impact won’t be so bad on your belly.

Controlled Labs Green Magnitude is your traditional creatine blend. It’s a step up from the standalone supplements but not so fancy that it loses focus on why it’s called a creatine blend. Dosage is good, decent pumps, and the extra nootropic twist ain’t so bad either. It’s one of those products you may not really, really like but you can’t hate it either because it works.