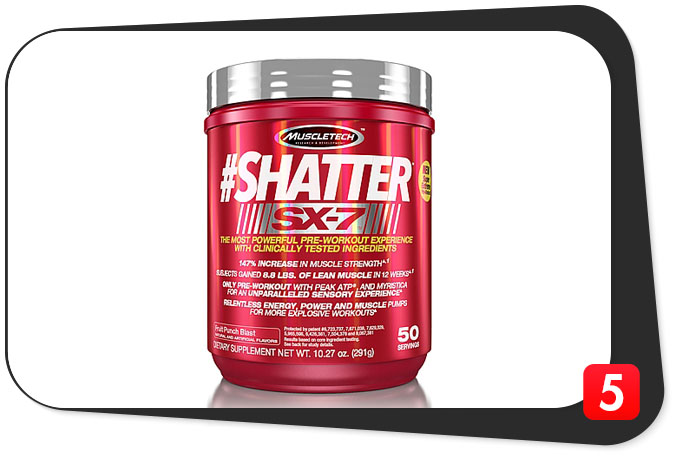 MuscleTech’s Shatter SX-7 is definitely not your ordinary preworkout. It’s creatine-free and makes use of more than their fair share of herbs in their mix. Not exactly something you see in traditional formulas. Being a creatine-free preworkout is often considered suicide in the supplement world too.

Despite the mad use of herbs, SHATTER SX-7 manages to fit great ingredients while not overcomplicating their formulation. It’s great and all but there’s a catch: It’s expensive as that last restaurant you treated your ex to and bro, we both know our wallet’s traumatized from that.

Let’s take a look at the SHATTER SX-7 and see if the formula justifies the price.

SHATTER SX-7 clearly states it is capable of 147% increase in muscle strength as well as giving user up to 8.8 lbs. of lean muscle in 12 weeks! How crazy are those numbers? MuscleTech crazy that’s for sure. Those numbers could be factual to an extent but we’re not sure if it’s because of Shatter SX-7 or purely because of one of their key ingredients: Peak ATP®. Formula notes:

Muscletech Shatter SX-7 may not look like much at first but should shatter your disbelief once you try it.

Okay so here’s the lowdown: It has great ingredients all in all even when they decided to discard our favorite creatine and other stimulants in the final mix.  The catch is, Let’s take a look at the following ingredients:

The ingredient choices may seem odd but they function the way the label says they would. The only drawback, especially if you’ve been taking supplements for a while, is the dosage for each ingredient. Most bros might go for two scoops the moment they see this product and doubling the dose would instantly double the expenses.

For their Ultimate Musclebuilding & Pumping Complex, they could’ve added a bit more Carnosyn and Peak ATP for an ideal single-scoop dose. These two ingredients are definitely premium so we understand the cost reduction practice they made here but we prefer our single servings stronger than us. Too bad the customers have to chalk up the cash if they want to get the full strength dosage.

Their Caffeine is okay but most bros might go for at least 1.5 scoops so the problem is solved. Before you go out and dump a lump of powder down your shaker, let’s take into account the fact that their Extreme Energy & Focus Complex contain herbs that act as both T-boosters and lipolytics. This means this preworkout intended not to rely on caffeine as their sole stimulant. Synergy is synergy, bro.

Grains of Paradise hits the clinically effective minimum dosage while the other herbs wouldn’t be anywhere near the recommended dose and yes, even with two scoops.

As individual ingredients, these may seem like really bad choices for a preworkout but if you look at the formula as a whole you might see why users have been more than satisfied with this product. Their dosages and combinations were put together to complement each other and not steal the show and when it comes to supplements, we prefer a well-rounded and carefully balanced formula.

It can definitely help build muscle and definitely gets you hyped up for a tough day at the gym even if the caffeine content isn’t much. Users also report of no crashing which is a big plus for an energy supplement.

And yes it will help you “shatter” PRs and plateaus. There, we said it.

It can be newbie friendly but it’s not for those who want creatine or those who doubt creatine substitutes like Peak ATP. It seems to be highly marketed for those who have tried other PWOs before but either didn’t like the formulations, the side effects, the crashes, or the bloating sensation creatine leaves them.

All you should get are prolonged tingling sensations specially when taken as two scoops. If you’re sensitive to caffeine intake, you might want to stay with one serving instead as two scoops might shock your system with 320 mg of caffeine. So far, however, no reports of caffeine overdose symptoms yet.

MuscleTech Shatter SX-7 is a solid preworkout made with a unique combination of ingredients to help you get pumped, stay focused, and perform longer. It’s not the best out there but what matters is it works. The price is a let down but if you got wads of cash lying around you should be covered, rich bro.