You are here: Home / Nootropics / Nootroo Review — This formula is gold. Literally. 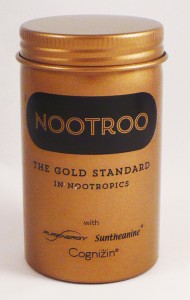 NooTroo has an unusual metal cannister. Gold-colored of course.

With its real gold-and-silver capsules and bling-bling container, Nootroo could easily be dismissed as a glitzy gimmick.

But Nootroo‘s futuristic formula is more than a glamour shot.

Nootroo is two separate nootropic formulas–Gold and Silver–presented in the same container and taken on alternating days.

The capsules are spiked with real gold and silver flakes so you can easily identify which one to take (and impress your friends). NooTroo features: 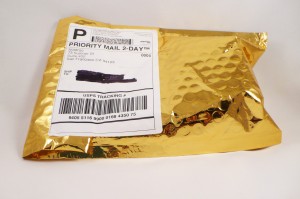 Even Nootroo’s bag is gold. Too bad shipping was late. 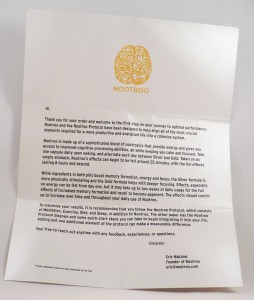 You get a nice letter from Nootroo’s Founder, explaining how to use it. 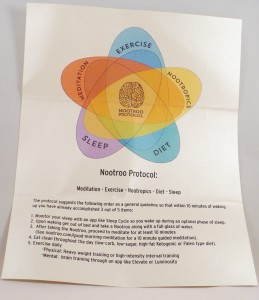 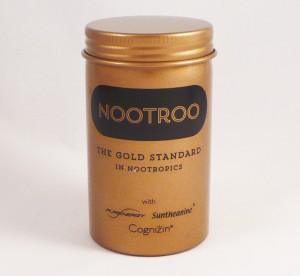 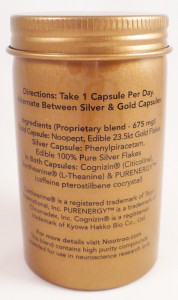 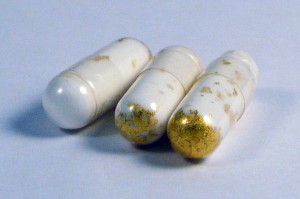 Nootroo wasn’t kidding about having real edible gold in their Gold Formula capsules. 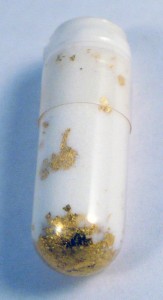 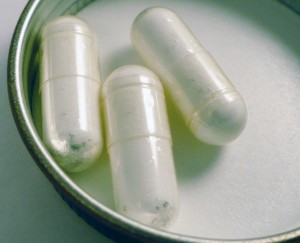 Nootroo Silver capsules. Not quite as prominent as the Gold. 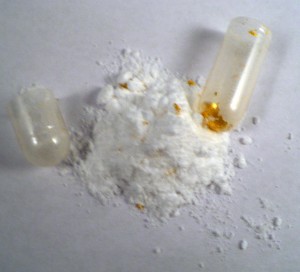 We know you wanted to see it. We did too. An opened Nootroo Gold capsule. Sadly, not enough gold to pawn.

Nootroo throws a curveball by presenting tandem nootropic products in a single tin to be taken on alternating days. We’ve never seen this approach.

Nootroo dazzles us with 23.5 karat gold and silver flakes in the capsules; they weave mystery by not showing their dosages or supplement facts anywhere.

All we’ve got to go on in this review are the ingredients… which do show some good nootropic potential. Let’s check ’em out:

Our #5 Best5 Nootropic, L-Theanine is great on its own for boosting Alpha brain waves for relaxation and calm, clean focus. It also enhances Caffeine‘s alertness benefits by soothing away jitters and nerves.

SmoothCaffeine is a great nootropic name, but we have doubts about a specific ratio of L-Theanine-to-Caffeine conferring any special advantage.

With our usual disclaimer that “Caffeine is not a true nootropic, blah, blah,” we still admit SmoothCaffeine will deliver fast-acting brainpower benefits.

Our #1-Ranked Best5 Nootropic, also found in our best overall nootropic stack…. Citicoline is ideal for any brain formula.

Citicoline is particularly smart in Nootroo Gold and Silver: Beyond its far reaching effects for mental energy, memory and processing speed, it seems to have synergy with Caffeine, which in turn has synergy with L-Theanine. Bonus points to Nootroo for skillful formulation here.

Noopept is a Russian branded ingredient that is classified as a racetam, but in reality is a different class: It’s been found to be 1,000X more powerful than the most popular racetam: Piracetam.

Noopept is believed to boost acetylcholine, which may help with memory, learning, attention, mood and more.

Phenylpiracetam, a derivative of Piracetam, is suggested to have nootropic properties help with memory, mood and calmness.

It is claimed to work via psycho-stimulant activity. This doesn’t sound “calming” to us, and may be harsher than advertised for some.

Nootroo formulas have compelling ingredients, and seem to be well thought-out. But the secretive nature of these formulas–no dosages, anywhere–along with the exotic racetams create some concerns.

Nootroo has some testimonials talking about mental energy, being in “The Zone,” and otherwise feeling sharp.

Their own copy talks about enhancing and restoring memory, fighting age-related cognitive decline, boosting acetylcholine, calming the mind, improving focus and sharpening alertness. In terms of ingredient choices, these claims check out.

The problem? They don’t show dosage–making it impossible to know if any of these fine ingredients actually reach therapeutic levels.

Still, NooTroo works for mental performance… based on its Cognizin Citicoline and L-Theanine alone. It works as a stimulant by mixing in caffeine, which is cleverly smoothed out by the other ingredients.

What we’re not sure about are the exotics in each formula–Noopept and Phenylpiracetam. Barely researched, both stand on their strong presence for brain health overseas.

These racetams are the X-factors–if they do work, they could really push NooTroo’s cognitive benefits over the top.

Nootroo’s marketing materials blatantly target prosperous young professionals who live in, or aspire to live in, places like San Francisco and Silicon Valley. They’ve got that tech-startup vibe going.

Nootroo looks clean. The formulas are simple; 3 ingredients each. All the ingredients are regarded as being well tolerated and safe, including the racetam components, Noopept and Phenylpiracetam.

Those who are sensitive to stimulants are advised to proceed with caution, however, given the lack of research on Nootroo’s racetams and how they may interact with the formula’s caffeine.

Bonus Con: Pointless glitz = high price. We love ripping on the silliness of Nootroo’s use of REAL gold and silver. One year ago Nootroo founder Eric Matzner said, “We are working on bringing the price down.” Then why are real gold and silver still in the formula, Eric? Why? Come on, man.

Nootroo is a sexy luxury brand & a quality, 4-star brainpower formula. It combines the best nootropics with exotic wildcards. And even though they hide dosages, Nootroo is so credible we believe their dosages are effective. Nootroo is definitely worth a try.