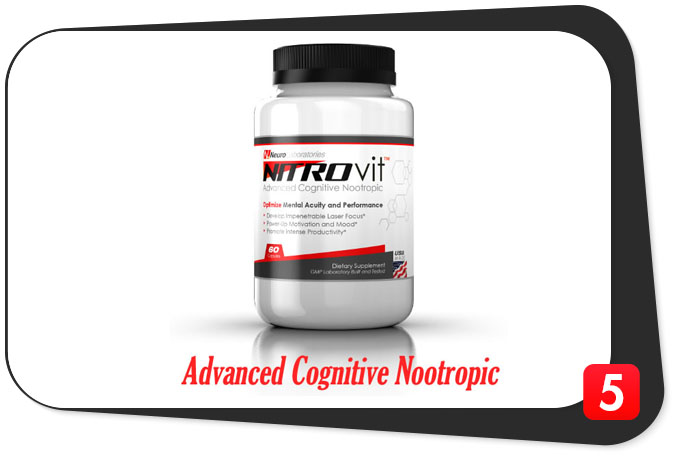 Caffeine is not a nootropic.

There, we said it. But if you read Best 5 Supplement reviews, it’s probably not the first time you’ve heard us make this point.

NITROvit & NITROamp feel the need to put caffeine in BOTH of their nootropic formulas, however… which takes away from some otherwise outstanding nootropic ingredient choices.

The reliance on caffeine — and their use of some lower-quality ingredient forms — land these NITRO supplements just outside of our Best 5 Nootropic Supplements for 2016.

But NITROvit and NITROamp still have plenty of benefits for anybody who needs a brain boost. Let’s check ’em out.

Made by NeuroLaboratories, NITROvit & NITROamp are nootropic formulas that can be used alone or combined into a “Stack.” NITROvit is billed as an “Advanced Cognitive Nootropic” designed for “laser-like focus” and “intense productivity.” NITROamp appears to be more of a short-term mental energy booster. Together, the formulas may work by:

NITROvit & NITROamp combine to supply ALL 5 of our Best5 Nootropics.

They look like solid nootropic supplements, and the manufacturers make every cognitive performance claim under the sun. But can they back it up? Let’s take a closer look at the formulas and find out:

This 12-ingredient complex supplies many of the best nootropics that work. Let’s break ’em down into categories:

NITROvit has 4 of our Best5 Nootropics! In order, they are:

So far, so good. NITROvit delivers some of the best nootropics, with brain health nutrients to boot. But NITROvit has formula flaws, too:

Some ingredients are low-dosage; some are low-quality.

We appreciate that NITROvit gives us dosages, but it exposes that some are way too low. For example, to get brain benefits, you need at least:

Low dosage is worsened by low-potency forms: Cheap B6 & B12, and no standardized herbs. They say you can double-dose (up to 4 caps daily), which would help with these dosage/potency issues.

Despite flaws, NITROvit is a strong nootropic formula.

Many NITROvit ingredients DO hit ideal dosage ranges for mental performance benefits. They’ve done a fine job choosing nootropic ingredients that not only work, but seem to work well together. 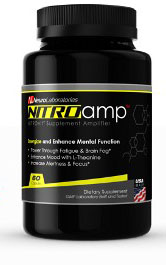 It’s just Caffeine+L-Theanine: A popular mental performance duo, but caffeine is not a nootropic. NITROamp’s caffeine is also concerning because NITROvit already has caffeine. Take both as directed, and you get 200 mg Caffeine. That’s a lot, especially if you drink coffee. L-Theanine helps: It’s a Best5 Nootropic that helps relaxation & clarity while reducing caffeine jitters.

It’s funny how many nootropic benefits they claim. Here’s a sampling: Focus, clarity, learning, mental energy, mood, concentration, memory, alertness, motivation, anxiety, and more. The ingredients back up many of these claims; in fact, when you put NITROvit & NITROamp together, they have 7 of the 11 ingredients found in our top-rated nootropic product. for overall cognitive enhancement. We feel their most accurate claim is the simplest one, right on their homepage: “May help control focus and attention issues.”

Go-getters. They emphasize boosting cognition to gain a “competitive edge,” along with creativity and productivity claims for professionals. They offer a “Student Pack” that targets young people, but they also say the formulas help with age-related brain problems. Since NITROvit and NITROamp supply many of the best nootropics, it makes sense that these formulas could be used by anyone, regardless of age… as long as you can handle caffeine.

NeuroLaboratories claims that at their recommended dosage, the formulas have no side effects. BUT, they also say that you can double the dosage… which would deliver 400 mg caffeine, and would almost certainly result in jitters, nervousness and other caffeine-related side effects.

NITROvit and NITROamp work. NITROvit falls short on some dosages, but enough hit therapeutic dosage to bring nootropic benefits. Both formulas sharpen alertness based on caffeine alone. Meanwhile, the real nootropics are performing bio-activities to support mental clarity, memory, attention, productivity and more. If NeuroLaboratories used clinical dosages, standardized herbs and premium forms, NITROvit and NITROamp would easily be a 5-Star Stack. But as the formulas stand…