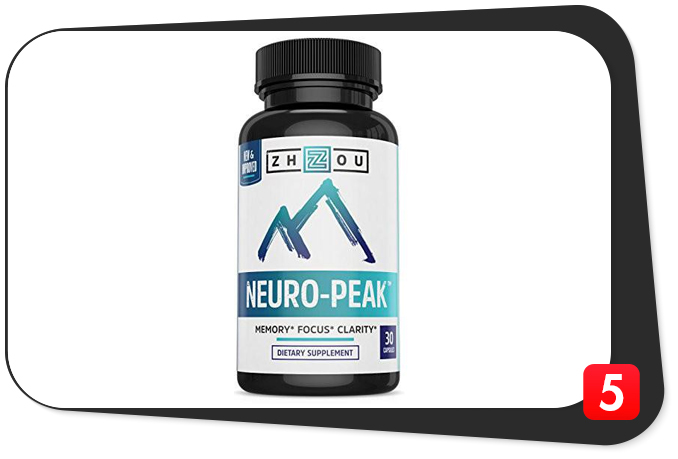 Neuro-Peak is a natural nootropic supplement made by the Zhou Nutrition, a Kansas City, USA-based supplement company with an Asian-inspired design and ancient-meets-modern philosophy.

Neuro-Peak, marketed as a peak performance-oriented nootropic stack, has garnered a lot of positive reviews since its initial launch.

So will climbing this mountain unleash the Greatness by Nature that is promised by Zhou Nutrition? Let’s find out in this review.

Neuro-Peak is a 6-ingredient nootropic stack designed with convenience in mind: Serving size is a single capsule, and Zhou Nutrition suggests it can replace several individual brain supplements. Promising peak performance when you need it most, Neuro-Peak positions itself as a professional’s nootropic. Formula notes:

Neuro-Peak has a clean and simple formula design that seems to make good on Zhou Nutrition’s ancient-meets-modern philosophy.

Indeed, some of the ingredients they choose are among the best for memory, focus, stress, mood, and the overall brain-energizing benefits that Neuro-Peak is supposed to produce.

But does it stand up to the scientifically formulated, premium formula claims that are made about this product? Let’s take a closer look at the ingredients.

Vitamin B12 is an important foundation nootropic for brain health. In the context of Neuro-Peak’s overall design, vitamin B12 is probably included for its role in cell energy metabolism, which is especially important because the brain consumes a lot of the body’s total energy supply.

B12 helps the brain in many ways beyond energy, including assisting with neurotransmitters, helping to preserve the size of the brain, and playing a key role in the formation of myelin.

On its own, vitamin B12 is a good nootropic. However, it falls short of “great” in Neuro-Peak for two key reasons:

Bacopa monnieri has been around for a long time as a traditional herb, and has long been associated with cognitive function, including creativity and learning. Modern science continues to identify Bacopa as an effective multi-tasking brain health nutrient.

It is also classified as an adaptogen herb, which means it has anti-stress properties that match up well with the advertised stress-support claims of Neuro-Peak.

Phosphatidylserine (PS) is another one of the greatest nootropics on the planet today.

In particular, phosphatidylserine is probably the best and most evidence backed nootropic for enhancing memory performance. But that is not all that this impressive brain nutrient can do.

Many of PS’s benefits are attributed to its role in keeping brain cell membranes fluid and flexible, helping them to perform dynamically, “firing” and receiving neurotransmitters for cell to cell communication. 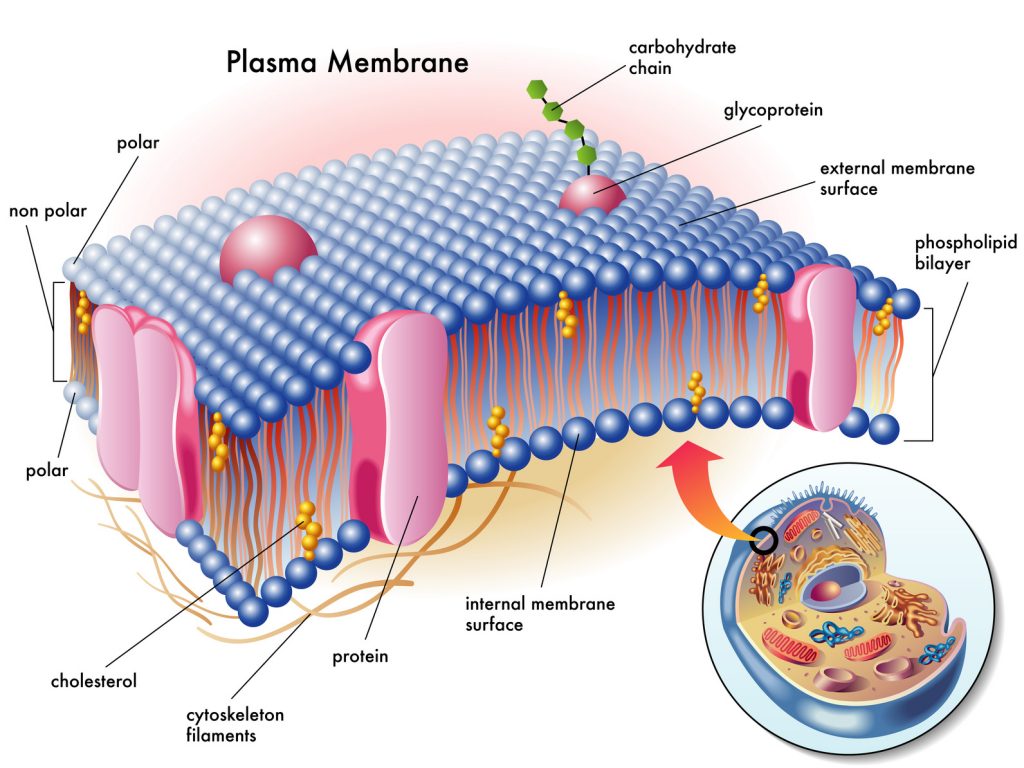 Phosphatidylserine is known for optimizing the structure and function of brain cell membranes.

It all adds up to a powerful nootropic that can help with both short term cognitive performance, especially in terms of memory, and long-range brain health: An excellent choice for the Neuro-Peak nootropic stack.

Ginkgo biloba is a truly legendary nootropic, with ancient roots in traditional Chinese herbalism. With that in mind, it perfectly fits the zen-like style and philosophy of Zhou Nutrition.

Ginkgo biloba is mostly known as a brain circulation enhancer — good for overall brain health, but also for short-term performance in the context of brain energy. When blood flow to the brain is robust, more oxygen and glucose can reach gray matter to be burned for brainpower.

Rhodiola is another ancient herb with a legendary ability to counter the effects of stress that has been backed by modern science. Rhodiola’s stress-defying properties work for both the mind and the body, making it a favorite nootropic and all-around performance and endurance enhancer.

Rhodiola makes a lot of sense in the Neuro-Peak’s formula, especially when it comes to claimed benefits for mental energy, mood, and stress control.

The most pronounced brain benefit associated with Rhodiola rosea may be for mental energy; freeing the mind from the heavy weight of stress seems to have a rapid and significant revitalizing affect for the mind and body.

Neuro-Peak’s 50 mg is low for Rhodiola, however, its 3% salidrosides and 1% rows of in standardization are top-notch, in accordance with what we see in the Best nootropic supplements on the market. 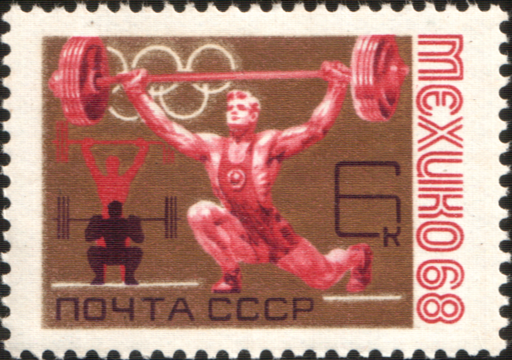 Rhodiola rosea is so effective for competitive performance, it was used by Russian Olympic athletes. By USSR Post [Public domain], via Wikimedia Commons

DMAE’s brain bioactivities help keep cognition sharp and clear throughout the aging process. In Neuro-Peak, which is ostensibly a more immediate mental performance enhancer, DMAE may offer some secondary benefits for concentration, focus, and attentiveness – potentially due to its role in acetylcholine synthesis and its ability to optimize neural signaling.

Neuro-Peak’s Logo has a Hidden Message

Zhou Nutrition has a distinct Chinese vibe across their brand. Neuro-Peak’s logo is a perfect example: It appears to be based off the archaic Chinese pictogram symbol for “mountain,” the progression of which is shown below. Very clever, Zhou.

Neuro-Peak is a smartly formulated brain supplement. Its efficient design uses six nutrients, all of which are bona fide brain-boosters. But does Neuro-Peak work as advertised?

For the most part, yes. Advertised as a memory, focus, and clarity nootropic stack, Neuro-Peak hits the mark with many of its nootropic choices for these desired outcome. Furthermore, Neuro-Peak positions itself as boosting brainpower via mental energy pathways – and again, we have to agree with its design for this purpose.

This is smart formula design in action – nootropic ingredients that work well together and complement each other to achieve greater results for specific cognitive goals.

Where Neuro-Peak also gets it right is by using nootropics that are multitaskers.

Bacopa monnieri is famous for supporting learning, but underneath that popular benefit are beneficial bioactivities for brain chemicals, cerebral circulation, antioxidant protection and more, all of which add up to a healthy brain and more diverse cognitive performance benefits.

Rhodiola rosea and Bacopa monnieri combine into a one to adaptogen punch that shows a clever formulation strategy for reducing the effects of stress on cognitive performance; DMAE’s bonus support helps with overall brain health over the long-term along with short term cognitive performance.

There’s not much to argue with when it comes to the ingredients chosen by Neuro-Peak.

However, the formula does these great ingredients a disservice by using some inferior or low potency forms, and underdosing others. The formula could be improved by using premium ingredient forms and taking two capsules instead of one as directed.

The Neuro-Peak formula is designed for memory, focus, and clarity. This set of benefits is supported by Neuro-Peak’s ingredients that promote brain circulation, energy production, and cell to cell communication. It also makes good on its promise of stress and mood support.

Neuro-Peak is mostly marketed as a short-term performance booster, however its formula also lends itself to long-range cognitive benefits.

Neuro-Peak seems to be targeting young professionals, judging by its imagery and marketing materials. Zhou Nutrition features slick, cutting-edge branding and a great brand story that have made it popular at online retailers like Amazon. With that, we are sure that some people who take this brain supplement our Zhou Nutrition brand loyalists who are trying something new from their favorite line.

This is a caffeine free formula, and it doesn’t supply any unusual or exotic ingredient, nor any over-the-top megadoses. It appears that Neuro-Peak would be both safe and well tolerated, with few side effects to worry about

Neuro-Peak is a nootropic supplement with a clear goal and a well-defined formulation strategy to get there — formulated with care by a physician, just as advertised.

But due to some cheaper ingredient forms and lower-end dosages, the strength of Neuro-Peak’s potency may not meet the brilliance of its design. The easy fix: Take two capsules instead of one. If you do that, the price per serving will go up – but Neuro-Peak is affordable to begin with.

Another option: Check out our best nootropic stack supplements of all time to see products that amplify brainpower by pairing smart formula design with potently dosed, advanced nootropic forms.