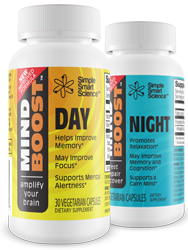 We all know that sleep deprivation absolutely crushes mental performance.

So when MindBoost developed a 2-supplement stack for brainpower and sleep, we immediately took notice.

The concept makes so much sense: Cyclical, 24-hour support for both cognitive function and the precious sleep that helps keep our minds sharp.

So, does MindBoost back this great concept with formulas that work? Let’s find out.

MindBoost Day and Night are two brain formulas designed to be taken together as MindBoost Complete: “The only full cycle nootropic.” MindBoost claims this 24-hour nootropic strategy boosts mental performance during the day, and then helps the brain rest and rejuvenate better during sleep. Nootropic claims for MindBoost include:

This blend supplies one of our Top 5 nootropics: Bacopa (#3). The Rhodiola is one of our other Nootropics that Work. It’s smart to combine them; both are adaptogen herbs that fight mental fatigue and stress. Ginkgo is another top nootropic that works. Ginkgo is famous for memory, but is more likely used in this formula for its fast-acting benefits for attention.

These two B-vitamins play roles in brain chemicals and nerve health. The dosages are good, but cyanocobalamin B-12 is a low-quality form. The best brain supplements will use B12 as the superior methylcobalamin form, which is far more active than what we see here. The inferior forms make it hard to get excited about these ingredients in MindBoost Day.

Like Rhodiola and Bacopa in the Day formula, the Ashwagandha in this blend is an adaptogen herb that helps with fatigue and stress, has nootropic properties, and may prime the brain for restful sleep.

Picamilon is an unusual ingredient that combines the relaxing, anti-anxiety neurotransmitter GABA with the B-vitamin niacin, which also has anti-anxiety properties.

Editor’s Note: In October of 2015, the US Food and Drug Administration issued a statement saying that picamilon, due to its synthetic lab-altered properties, cannot be considered a dietary ingredient. This would mean that picamilon cannot be supplied in dietary supplements. This is too bad, since picamilon is such an interesting and promising nootropic. Existing bottles of MindBoost may still have it, but look for them to reformulate and remove picamilon after the FDA’s recent statement.

Meh, why is it here? It’s already in the Day formula. Why take it again? Seems like useless filler.

MindBoost Day’s ingredients are associated with mental alertness, brain energy, quick thinking and stress reduction. MindBoost Night targets stress and anxiety, and seems like it would create feelings of relaxation and tranquility before bedtime. Together, they might give you feelings associated with a well-rested, well-nourished brain–better memory, mood, and mental performance.

It has a feel and formula that perfectly address the needs of working moms and dads who need to always be on their toes both professionally and personally. They are stretched to their mental limit each day, and then need to squeeze the most rejuvenation out of each precious minute of sleep.

Both formulas are simple, and MindBoost Day in particular has some high-quality herbals. We think both formulas appear to have an excellent tolerability profile, with few side effects to worry about.

MindBoost Day & Night is a great concept. The big picture here is that deep, restful sleep and smart nootropic nourishment may work together synergistically to enhance mental performance. As for the actual formulas, there are more complete nootropic complexes and better sleep supplements out there. Still, Day seems good for busting stress and energizing the mind; Night seems good for pre-sleep calm that leads to better rest. You could probably make your own Day/Night formula combination out of individual supplements… but MindBoost did it first.