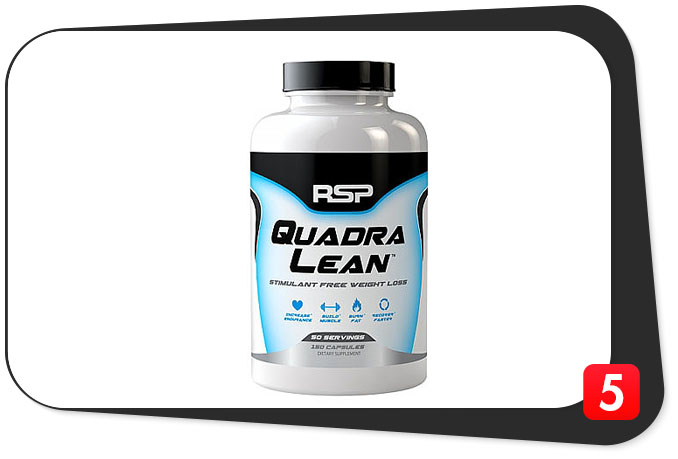 Can you figure out how QuadraLean got its name?

It took us hours, but we got it: QuadraLean is so named because it addresses 4 fat-loss bio-pathways with 4 different ingredients.

QuadraLean is a great name for a great concept. (But our “4X4 Fat Buster” headline is better). And the formula backing it up is pretty good, too; in fact, it almost cracks our Best 5 Fat Burner supplements list.

Let’s check it out.

These organic compounds promote the breakdown of fats and help to optimize metabolism for weight loss.

Contains Acetyl-L-Carnitine, Propionyl-L-Carnitine, and Carnitine Tartrate, all of which are amino acids naturally produced in the body to promote cell energy.

The Garcinia and Raspberry ketones are trendy, but effective. Garcinia 500 mg is fine, but it’s not standardized for the active ingredient Hydroxycitric Acid (HCA). No idea how much HCA is in QuadraLean, and that’s a strike against the formula.

QuadraLean’s 1 g CLA per day is low, considering successful human clinical studies have shown weight loss benefits at 3 g+ daily. Clarinol is a high-quality brand though, and may possibly have potency advantages.

The carnitine is good pre-workout energizer with some fat-burning activity. Seems to be helpful for fat loss during low carb-induced ketosis. 1 g is about the minimum dosage for benefits. But the 3X forms of carnitine seems like a good idea for full-spectrum carnitine activity.

We contest QuadraLean’s claims of “effective dosages of 4 primary ingredients.” The lower-dose Clarinol CLA voids that statement, especially ’cause it’s one of the formula’s best ingredients. We got beef with that. (that’s a CLA joke).

But overall, QuadraLean is efficient and smart – no wasted ingredients; nothing off-target. Just 4 ingredients that work well together to support your weight loss.

QuadraLean is a fat-burner/energizer first. Secondary benefits are for appetite, and fat-blocking. QuadraLean’s muscle mass claims are harder to validate, but seem soft given the lower dose of muscle-supporting CLA in the formula.

It seems to be taken by the body building community. But QuadraLean has neutral branding; it doesn’t seem to be customized for any one particular audience. Anyone seeking to lose weight or curb appetite might benefit from this formula.

There are some possible mild side effects reported like nausea or stomach-related issues. But the formula looks good to us, especially since it avoids the use of side effect-riddled stimulants.

QuadraLean is a straightforward fat-burner. Simplicity works to its advantage: 3 of 4 ingredients are well-dosed. It’s a smart, simple formula for fat loss success – without using stimulants or 20+ ingredients. Go for it: Feel QuadraLean’s 4X burn.