You are here: Home / Creatine / XPI DECACOR Review – If Three Is A Crowd Then This One’s A Concert 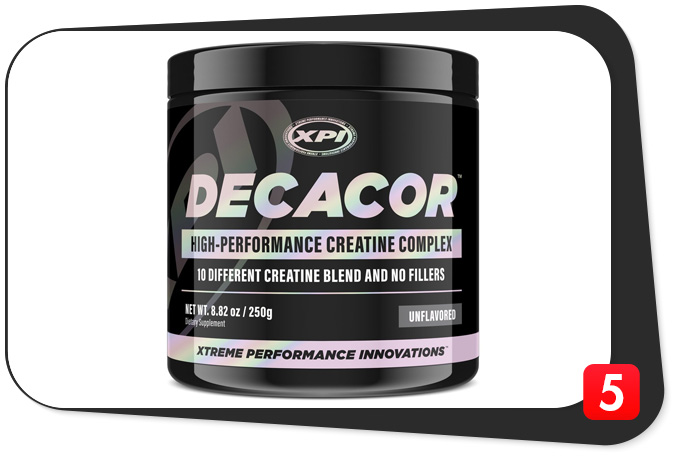 You know what people say about taking everything in moderation? That’s a pretty solid advice on just about anything when you think about it. If you don’t eat a lot, you won’t get fat. If you control your gym time, you won’t burn yourself out.

The same thing can be said about creatine. One creatine is standard, two or three blends is pretty cool. Five? Hmmm…why not? Then XPI comes out with a genius idea: Ten creatine forms in one blend. Yep, ten. One and zero side by side.

We don’t feel good about mixing up things but this can always work, right? Only one way to find out!

XPI takes pride in its DECACOR one unique take on creatine supplements and it’s to mix and mash all known forms in one blend. Granted each form has a benefit, we’re almost sure it won’t have the kind of benefits XPI thinks it’ll give. Formula notes:

No, more is not always better.

XPI DECACOR should take a hint at what made creatine arguably the most successful workout supplement in the world: Simplicity. No fancy blends, no extra ingredients, no innovative perks, Creatine has made it so far without anything else accompanying it and we think DECACOR’s 10-in-1 creatine complex is just complicated. Let’s break down the ingredients in this formula:

XPI DECACOR sort of dug its own grave when it thought mixing in ten popular forms of creatine without doing its homework would make it a superior supplement. Funny how they claim to be the “World’s Most Powerful Creatine Complex” on their website when they are anything but.

Individually or by small groups, these forms could potentially become potent blends but as a small fraction of a whole, you’re better off buying creatine monohydrate. They were also unable to remove the loading phase altogether which some of the forms they used promote and that’s like sawing off one good chunk of your leg to make your pants fit, you know?

A bigger mess: Take a look at their addition of CEE. Most users know better than to use CEE but XPI, with all their research funding, didn’t.

What it will do for you is what a standard creatine monohydrate does, more or less. Endurance, performance, and recovery but we’re betting it won’t be as potent than if it used just two or three ingredients.

Definitely for new users who have yet to realize more is not always better when it comes to supplements. Us old guys avoid stuff like this all the time.

The bloating should be there since the reduced bloating perks some of these forms have would be minimal at most due to low dosage. Also, if you’re not careful, you might experience a false positive in your creatinine due to CEE’s conversion.

We’re not sure what to do with DECACOR. The idea was there but they should’ve known it would be theoretically poor in execution (or function) specially when it came to using CEE. Personally, that little fumble speaks a lot about a company and it doesn’t sound good. Hopefully, someone will reformulate DECACOR to be a much more formidable supplement in the future.