You are here: Home / Creatine / Promera Sports CON-CRET Review – Works Just Like Mono Minus The Bloats 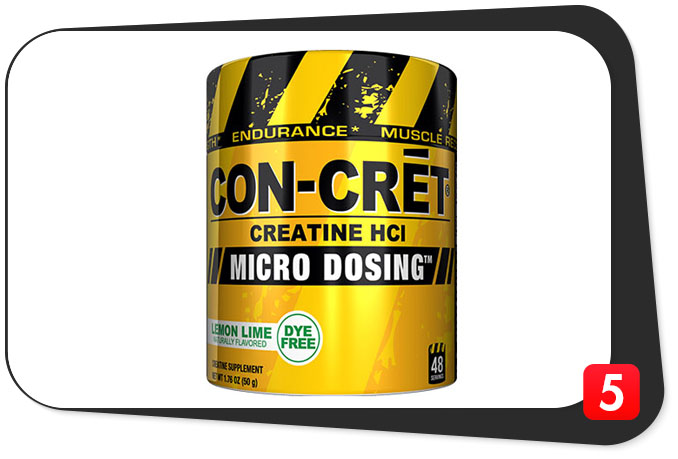 If there is one thing we all hate about creatine (and it’s really hard to hate creatine) it’s gotta be the bloats. Each scoop is good for you but our tummy just isn’t having it, you know? But the guys at Promera Sports think their CON-CRET is better than the traditional monohydrate. Their reasoning is for superior solubility which in theory should allow for fewer bouts of bloating and, according to their marketing team, fewer doses needed.

Is Promera Sports on to something here or are they just pulling our tail? Let’s find out!

CON-CRET is a one-ingredient creatine supplement which relies on Creatine HCl, touted to be a more soluble form of creatine than traditional monohydrate. It’s also available in capsule form for users who just can’t swallow powder without gagging. The big bomb is where the bottle indicates it can do everything monohydrate can but better. We’ll take you up on that. Formula notes:

No superiority aside from solubility.

Hate to burst your bubble but we gotta be honest here (and we’re always honest), the only advantage Creatine HCl has over mononhydrate is it can be mixed easier and to an extent, be easier to ingest. It’s all marketing, guys. Let’s break down the ingredients in this formula:

The secret’s out and the evidence doesn’t look good. Creatine HCl, as it turns out, isn’t so superior after all. The thing with their “lower dosing” strategy has not been proven in a study as far as we’re concerned.

Before we get to the lovely bits, let’s first take a look at why Promera Sports think their CON-CRET is a necessary product in the market based on their website and those are 1. Some people are “non-responders” to creatine monohydrate, 2. The can is simply smaller than most creatine tubs, and 3. They offer 99.9% bioavailability.

We dug up lots of studies and this is by far the only paper (recently made in 2015) that seems to say HCl is superior to Mono in terms of body composition but here’s the catch: The study a) used only 27 subjects and b) the data indicates no significant difference.

Not to mention how every person’s metabolic response to creatine supplementation varies so the “body composition change” may not be easily replicated if they would conduct the same experiment today.

How about their bodyweight-centric dosing? Where did they get their claim of dosing per 100 lbs.? We bet it’s from this patent.

It says, and we quote, “An effective dosage of the supplement is about 500 mg to about 1500 mg of creatine HCl per 100 pounds body weight.” 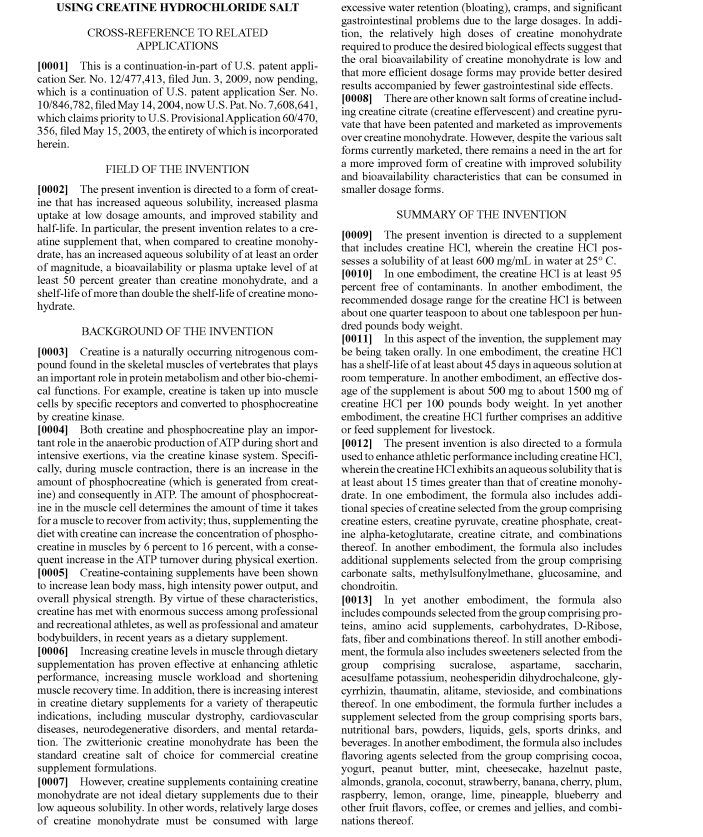 One page from the patent and there’s 9 of them. Imagine the horror of reviewing these things in a cubicle.

Well, as much as we want to say they’re correct, the research we did says this dosing is leaning towards the “smells like BS” end our patented BS-o-meter. We’re not saying this dosing doesn’t work, rather this dosing is not fully tested on a bigger scale. Their Micro-Dosing might work for you or not but would you take the risk of buying something for a claim that isn’t exactly polished?

Speaking of Micro-Dosing, we did what we could with our top-notch Google skills and I couldn’t really find anything that would make CON-CRET’s special dosing unique. Like we mentioned, we did find the original patent for Creatine HCl but it doesn’t say shit about “micro-dosing.” Our own opinion is they could’ve just used it to say “You only need a few scoops versus competition” in a shorter yet cooler sounding way.

We still like to say it works for easier ingestion and mixing so props to that. We also like to commend them for using natural flavors and essential oils (whatever those oils are) rather than the usual artificial crap most products hurl at us. And hey, it’s also DYE FREE so I guess that’s a pretty good thing to know.

But aside from those small perks, we can say the myths surrounding CON-CRET’s superiority to creatine monohydrate, in the context of physical benefits, is officially busted.

It’s at least at par with what Mono can give in terms of performance and recovery benefits but it should make the whole dissolving and bloating a little bit less of a burden. Another thing to note is one-ingredient supplements like CON-CRET are pretty sweet when it comes to building your own stack so that’s a cool perk to have in today’s multi-ingredient, multi-blend creatine industry.

The website says it’s for men and women looking to enhance workout performance. Well, that’s what creatine’s for, you know? We think it’s for lifters who just don’t like bloating anymore or hates the lumps under the shaker. It’s also for staunch HCl believers and we’re in no place to burst their bubble so we’ll let them have that.

There’s water retention so you might balloon up for a while but it goes away once your body gets used to it and once you actually don’t skimp out on your gym days. There’s also a chance you’ll still feel the bloat but that’s subjective at most.

With big claims like “99.9% bioavailability”, “No loading, No cycling”, and “Superior Plasma Uptake”, you’d think CON-CRET would have all the science on their side but the evidence for these points were as dry as gramps who hasn’t had any in decades.

Plenty of studies point to one thing: Creatine HCl, the form used by CON-CRET, is just at par with Creatine Monohydrate. The fact that creatine is one of the most studied ergogenics in the world also reinforces this fact even more.

It works like mono and beefs you up like mono but there’s a chance it won’t make your belly hurt like mono. If you’re after making your routines easier starting from the shaker, even if you have to dig deeper into your pockets, go for CON-CRET