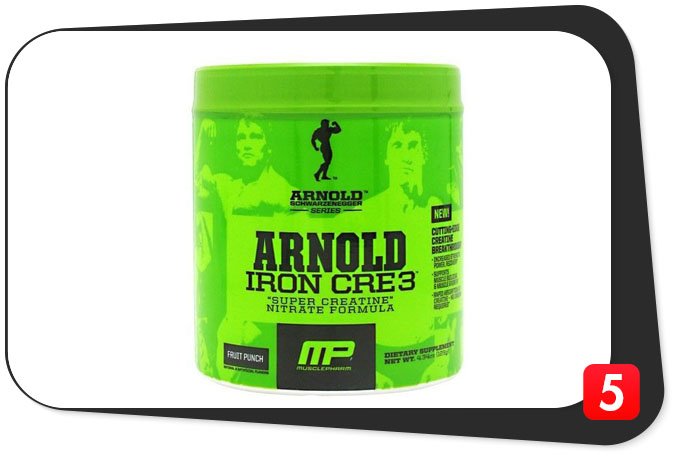 Sometimes the reason we begin lifting iron was because we saw our favorite person lift. There are many such individuals but the most popular right now has to be old Arnie back in the day.

What better way to capitalize on Arnie’s name than to create a series of supplements to go along with it? The folks at MUSCLEPHARM definitely get it when they release IRON CRE3.

Since it has Arnold’s name, we assume this stuff will give you mad gains with each scoop but assumptions belong to those who don’t know what they’re talking about.

Let’s see what IRON CRE3 is made of!

MP ARNOLD IRON CRE3 claims to be a “Cutting-edge creatine breakthrough featuring Ion-3 Nitrate Technology” but we have no idea what that “Ion-3” thing is supposed to be despite our research. Still, based on what we’re seeing, this supplement might just have a reason to call itself a breakthrough. Formula notes:

IRON CRE3’s creatine is just easier to mix in water.

When companies claim they’ve unlocked a secret formula it’s usually just marketing talk. We were skeptical towards this supplement and we were right. There’s nothing super here but it’s not bad either. Let’s break down the ingredients in this formula:

IRON CRE3 is not a strong creatine blend but we have to respect the synergy the formula provides.

Creatine Nitrate’s benefits are from two sources: Creatine and Nitrate. We know what Creatine does and the Nitrate part is capable of workout benefits such as boosting NO production (aka pumps my friend). What makes it all work, though, are the other ingredients in the mix.

The vitamins, though minor additions, are extremely important when it comes to muscle recovery. The HydraFuel Matrix brings in both performance and recovery in one small blend. Combine these two and you got two groups of ingredients geared to support the primary functions of creatine.

Should you load? If you’re going to load up, then you’re better off loading with plain creatine monohydrate first and then use this. There’s potential in its solubility and reducing/avoiding the loading step but it doesn’t always work for everyone even if the creatine is more soluble than a pinch of salt.

You should feel workout benefits in terms of endurance and lifting performance specially since this blend is capable of making sure your muscles stay hydrated and well-oiled.

This is definitely marketed towards the general lifting population but we reckon its main customers would be users specifically looking for a good Creatine Nitrate blend.

Bloating should be minimal due to the solubility of creatine + the relatively small dose.

We like the idea of using Arnold to market something but we think MUSCLEPHARM may have been a bit too modest with IRON CRE3. It’s like selling something half-baked if we’re going to be honest about it. With that said, we still say the product works as it should and you might even get a great experience out of it too and make Arnie proud of you.

Check out our other “Arnold” reviews.