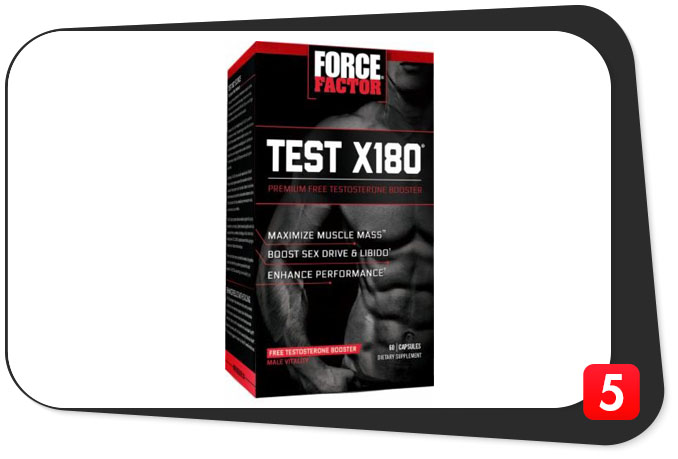 For what it’s worth, Force Factor Test X180 is a decent testosterone-boosting formula.

Too bad Force Factor is so notorious for shitty ethics & poor customer service, including autoship scams.

Best5 is looking out for you, Bro. We would NEVER direct you to companies that might be scammy, so we cannot recommend Force Factor products.

Test X180 is called a “testosterone booster,” but we think it’s more accurate to say it has “testosterone-like” benefits. They claim to you a beast in the gym and in the bedroom, which nicely sums up what the formula seems to be really designed for. Other key notes:

Test X180 has some good T-boosters that emphasize male performance, but dosages are a big question mark.

Let’s take a closer look at the ingredients and analyze the Test X180 formula:

When Test X180 calls its main blend the “Growth Enhancement Matrix,” they must be talking about our DICKS… because the ingredients are more for erectile strength & sex drive than for boosting muscle mass.

Where the formula fails is with the super-low dosage of B6 and D3. Their 200 IU D3 dosage is especially weak; other T-boosters routinely offer 20X that amount. D3 is an awesome T-booster, too. What a waste.

Down with Test X180’s proprietary blend. Dosages are hidden, so all we’ve got is highest-to-lowest listed to go by. Listed second, Siberian Ginseng is good for stress, but is not for T or libido. So why do they make it the second biggest dosage in the blend? Hmmm.

At the end of the day, Force Factor Test X180 is still an OK formula. It doesn’t use the best T-boosters, but seems to intentionally pick T-boosters that also have sex & performance benefits. And even though dosages are probably low, they make up for it by using higher-potency ingredients.

Sex drive, performance and testosterone. In that order. A modest T-boost could reasonably be expected.

Guys who buy supplements at GNC. “Growth Enhancement Matrix” targets younger bodybuilders, as does Text X180’s packaging and branding. But they also address “age-related” testosterone decline and sex drive support–both of which seem to target an older male population.

The website claims none but consumers say otherwise. The side effects include outbreaks of acne, anxiety and nervousness, disturbed sleep, and the usual “erection that lasts longer than they intended to.”

Force Factor offers a “14-day trial period” for Test X180 and you’ll be given 14 capsules. This is an outright lie since they recommend two a day and you’ll get half of what they should be giving you.

If you don’t cancel within 18 days you’ll be enrolled in autoship, charged monthly, and most likely will have a very hard time cancelling or getting a refund. Or, as one Ripoff Report user complained:

There are better T-Boosters than Force Factor Test X180, but it’s still very good as a sex-drive-targeted T formula. While the Test X180 formula itself gets an OK rating, unless things have changed, Force Factor may be a sketchy company to deal with… so beware.