You are here: Home / Testosterone Boosters / HighT Review – The “T” is for “Testicles” 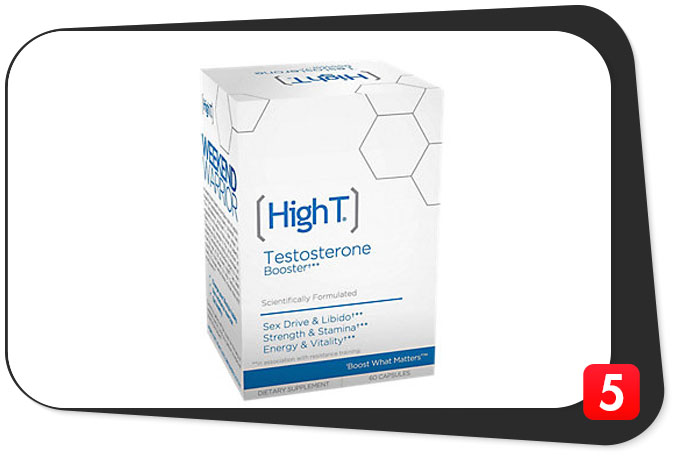 Are your hard-ons hardly as hard as they used to be? HighT might be for you.

HighT is a potent sex-drive formula first, and a mild T-booster second… but combine those benefits, and you’ve got a formula you will FEEL in your testicles.

If you’re age 30+ with male performance issues, then HighT is the kind of formula that makes sense. Just don’t get your hopes up for a massive androgen spike.

HighT is a Fenugreek-driven T-Booster, using 2 different forms of the herb.

Let’s check out the Fenugreek and other nutrients that comprise HighT’s formula.

Basically throwaway ingredients to fill-in their “boosts mentality, energy” blah blah blah slogan. The only one with T-boosting potential is B6, but HighT opts for pyridoxine HCl: A cheaper form. P-5-P B6 is better.

Same with their B12. Methylcobalamin is the good shit you want, in bigger doses–believe it or not, even HighT’s 800% DV is on the low-end of similar supplements. All that is moot though, ’cause B12 doesn’t boost T.

10% DV of Zinc. Are they freaking kidding us? Zinc is our #2-best T-booster, but you need a hell of a lot more to unlock its manly benefits–more like 30 mg. HighT’s 1.5 mg is useless. Why even add it at all? HighT’s amino acid chelate zinc helps; it is believed to boost zinc’s bioavailability, so more reaches the bloodstream.

Testofen maintains T. It seems to have mild T-boosting activity, too. The drawback is it may block DHT, another male sex hormone that’s even more manly than T. Fenugreek’s legendary male sex-drive benefits make it a popular ingredient in T-Booster formulas, probably more so than its test benefits.

Trigonella is more fenugreek. Why must they break out the fancy scientific name? Are they trying to fake us out or something? Just know HighT has two kinds of Fenugreek, both standardized, and one a premium brand.

A.K.A. Longjack, a powerful sex-enhancer and mild test-booster that works differently than fenugreek; it mostly functions as a linebacker against T-killer enzymes. 4:1 is enhanced potency, but other brands take their Eurycoma extracts up to a super-potent 100:1.

Rhodiola root helps with sexual performance and stress resistance. HighT knows rhodiola does nothing for T. But it’s a good manly herb for T-booster formulas, and HighT is using a premium & potent form. Good choice.

Like rhodiola, AAKG does nothing for testosterone levels, but makes sense in a T-Booster formula. It increases nitric oxide for more robust circulation where it counts: Muscles during training and erections during sex.

The HighT Proprietary Blend is excellent. Quality, branded, and standardized ingredients. It is more focused on sex & erectile performance than T. That’s not necessarily a bad thing; it shows they are on-point with matching the formula to their main demographic: Men age 30+ whose testosterone–and sexual performance–have started to decline.

HighT is powered mostly by Fenugreek. They’re so into fenugreek that they use two different forms. Is this a smart strategy? It could be. The Testofen is standardized to 50% Fenusides. The other HighT fenugreek is standardized to 50% saponins. It’s possible that HighT intends to give you a broader spectrum of the 100+ active compounds that make Fenugreek work. And they’re definitely giving you some high-quality & potent Fenugreek forms.

Eurycoma Longifolia and Rhodiola both really well with Fenugreek. This part of HighT’s formulation is smart.

Not-so-smart are dosage derps that undo a couple of the formula’s nutrients: Zinc at 1.6 mg is useless, and AAKG as the smallest dosage in a 900 mg prop blend is an automatic fail, since you need 1 mg AAKG to feel any benefit.

Overall, the HighT formula is a decent T-booster and sex-enhancer that could be made a lot better with a couple of adjustments, specifically to nutrient dosages and quality forms.

Sex enhancement. This applies to both libido and erectile function. Mild-to-moderate testosterone benefits add to that male performance mix. The combined effects of these two pathways may lead to feelings of overall manly wellness.

Men over the age of 30. Especially those who have noticed diminished bedroom performance. HighT targets these men, whose testosterone levels have started to decline. HighT is probably taken by men in their 40s-60s, too. Age-targeted T-boosters are a big trend; we salute HighT for customizing the formula in that way, but there are better testosterone formulas for the unique androgen needs of mature gentlemen.

Probably not. A few customers have reported nausea and stomach upset, but nothing serious. The quality ingredients HighT uses help with tolerability.

HighT is for a specific audience: Men in T-decline who want extra help with their erections & libido. Its T-Boosting power is mild, but HighT is still a good supplement for manly well-being.