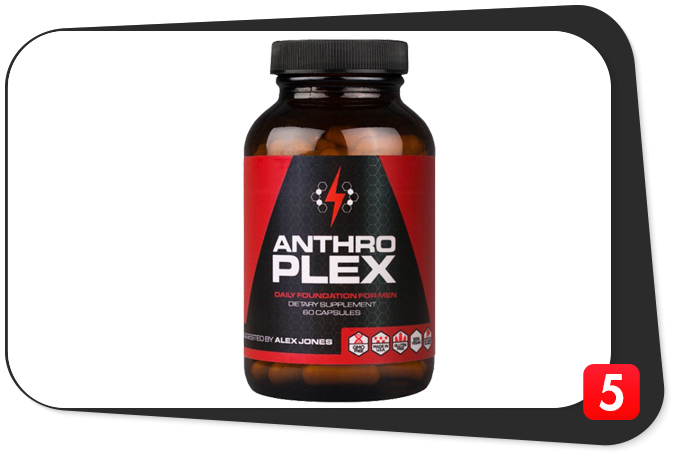 Plex – “having parts or units”

Meaning this supplement translates to “having human parts or units.” This is nonsense. Nipples are technically anthroplex by this literal translation. And there’s a reason we don’t see people swarming to the stores for nipple supplements.

Okay, bad analogy. But you get it.

Let’s check the review to find out.

AnthroPlex is the cap companion to Super Male Vitality; the sidekick that tries but, I mean…

Not all sidekicks are welcome. I get that Robin saved Batman many times, but many other times it seems Batman works better alone. AnthroPlex helps Super Male Vitality, sure …but it’s not absolutely necessary to the Infowars male vitality design. For instance:

What’s the point of this? There’s a chance this zinc may be an extension of the shilajit extraction below, but all the same: more zinc would be nice. Regardless, let’s check out the proprietary blend.

Four ingredients sharing 710 mg. This allows for a potential 177.5 mg per ingredient, which …eh, isn’t so great. Twice per day increases this to 355 per ingredient daily, which isn’t bad, but still isn’t great given the generally poor quality of these ingredients, almost all of which are presented as plain powders:

Tribulus Terrestris – The most popular testosterone boosting ingredient is not a testosterone booster. But it does effectively enhance feelings of male vitality, which, again, seems to be the primary focus of this male enhancement supplement. So, fair enough, Infowars.

Tongkat Ali – This Malaysian herb optimizes both vitality and male hormones, namely testosterone and stress hormone cortisol — at least during conditions of moderate stress. A potentially great ingredient for the muscle building bodybuilder.

Fulvic Acid – Sourced from Shilajit, a mineral tar that builds on rocks, fulvic acid is great for male muscle replenishment and testosterone expression. One of the better options for male health.

Solid choices for male vitality. Not quite the BEST for test boosters we’d expect of a big-time male vitality booster, but decent all the same.

We’re fans of Super Male Vitality. (Ditto for Androtrex, which is the same exact formula). But AnthroPlex? The best we can say is we like its ingredients on an individual basis. However, the formula does a poor job at stacking them.

Two reasons for this statement:

Begging the question: What is the point of this supplement?

An equal match up. Anthroplex? Eh.. not so much.

The Alex Jones line of supplements is actually one of the better supplement lines on the market. However, AnthroPlex, which is offered as a supplement to their leading male supplement, isn’t all that necessary. It’s not bad, but there are plenty other prime options with better ingredients that do a better job of enhancing male vitality and testosterone.

Currently, Infowars sells AnthroPlex for $29.95 — a 25.03% savings. Additionally, the supplement bears a “BACK IN STOCK” label, indicating this may be a limited time only thing (or just great marketing).