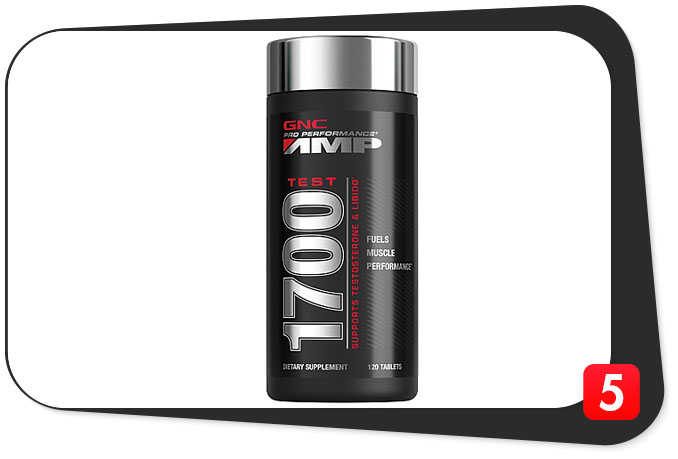 You caught us in the middle of deciphering the AMP in GNC Pro Performance’s T-booster AMP Test 1700.

We think we figured it out: What they’re saying is, this product provides AMPlified Testosterone to its users.

But can it really amplify your T? Let’s check it out.

You know GNC. They’re the Wal-Mart of supplement retail, and AMP Test 1700 is the T-booster of their GNC Pro Performance series. Directed towards “supporting Testosterone & Libido,” AMP Test 1700 provides a wide range of questionable ingredients at “Dosages Proven to Work”…  even though 1 mg of Zinc is way low, bro. Way low for T. Formula notes:

AMP’s “Test 1700 Activator” blend looks good, but the supporting cast is a little weak for T.

It’s that 1 mg Zinc & 25 mg Magnesium, Bro. Both are excellent mineral T-boosters, but dosed way too low. Superior T-booster formulas regularly supply 30X as much Zinc and 4X as much magnesium than AMP 1700. Those are the real “Critical Mass” dosages you want to send T skyrocketing.

On to much better things:

This blend is the best part of the AMP Test 1700 formula (and all dosages shown, so props to Test 1700 for avoiding prop blend BS).

If this T-booster actually boosts T then it’ll be due to these high-potency herbs—3 standardized, 2 in premium branded form, and 1 plain herb.

AMP Test 1700 does something interesting with its Tribulus by slicing it into two extracts: One that favors its saponin content and the other that favors… everything else? Regardless of how its split up, Tribulus isn’t the greatest T-booster, but is awesome for manly health and sex drive.

The Anabolic Advanced Matrix is the epitome of a “mixed bag”—it’s a little sloppy, but it’s got some solid choices… especially if you like some exotics like Deer Antler Velvet thrown in for good measure.

For the sake of simplicity, we divided this matrix into Good, Bad, & Ugly categories (also, who can resist an easy Clint Eastwood reference?).

(alright, so they’re not THAT bad, but they just seem to miss the mark as T-boosters…)

There are a lot of positives to this formula (Test 1700 Activator, Tongkat Ali, Rhaponticum), and it’s great they don’t pull any punches and put most dosages out on the table.

But some of the dosages look a little low, including a way-too-low 1 mg of Zinc, which is the only one of our Best 5 T-Boosters in this formula.

Then shit gets crazy when they throw in some wildcard ingredients.

Bovine Colostrum? The shit you give to newborn dogs? Sure, maybe this makes a little sense in a “nutritional” post-workout formula.

Deer Antler Powder? Risks and rewards, bro. Risks and rewards. But is risk worth it when it’s not really a T-booster? If you need muscle recovery & healing with your T, then the deer antler velvet makes more sense.

What you end with is a crazy T-booster formula “fingerprint” that just might work.

The strategy seems to be a core of really strong botanical T-boosters and manly-boosters… and then throwing in a bunch of other compounds for physical performance, recovery & anabolic growhth.

With 600 mg Testofen, 600 mg KSM-66, and 500 mg Tribulus, there are sure to be benefits to this formula. Combined, these three herbs cover AMP Test 1700’s benefits on Testosterone, Libido, & Muscle Performance. Granted, they won’t result in massive enhancements in any of these aspects of male health, but the effects would be there nonetheless.

BROSEPHS, BRO. Those who are looking for superior male potency and endurance, along with whatever mystery benefits exotics like chrysin & Deer Antler Velvet might bring. (We prefer to avoid mysteries in our T-boosters, and recommend TestoFuel as a no-frills, straight-shootin’ formula for gym-driven Bros, instead.)

At the time of writing, none have been report. The Test 1700 Activator should be well-tolerated thanks to those standards—however, you can expect a maple-syrupy smell to your sweat from that hefty dose of Fenugreek.

The main ingredients to look out for are Deer Antler Horn Powder & DIM, especially if you’re competing in a sport that tests for banned substances.

We’re reallyimpressed by that Test 1700 Activator, but would rather craft our own by stacking Fenugreek, Ashwagandha, & Tribulus (and extra Zinc, too) for a lot cheaper. But all Test 1800’s crazy extras might make a matrix that can do a lot more for manly health beyond T. Could be mad synergy, bro. Only one way to find out. If you got the cash, that is.