You are here: Home / Testosterone Boosters / Ageless Male Review – The Worst T-Booster of All Time? 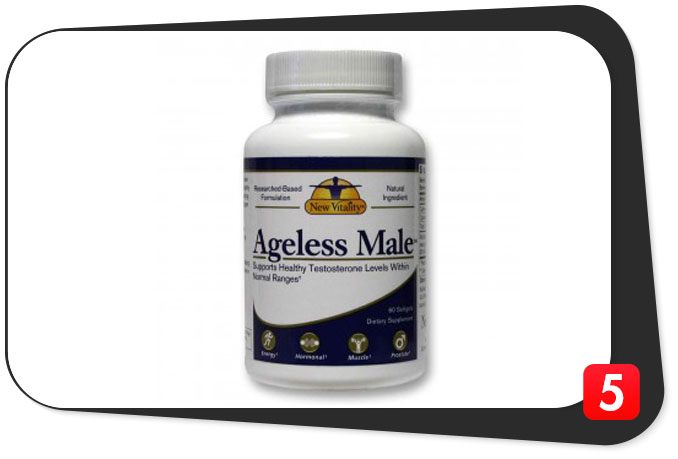 Backed by a relentless radio advertising campaign, Ageless Male is one of the biggest T-booster formulas out there: Over 2 million bottles have been sold.

But the formula is bad, and their reputation is even worse… which is why we urge men to avoid Ageless Male at all costs.

Ageless Male is a T-booster made by a controversial supplement manufacturer called New Vitality (NAC Marketing). They’ve got a ton of consumer complaints, and have been hit with class action lawsuits for their sketchy marketing practices. Their Ageless Male claims and features include:

Ageless Male is just four ingredients, which is pretty slim when it comes to T-Booster complexes.

The really good T-Booster formulas will typically supply more ingredients, beyond the “basics” seen in Ageless Male. They will also formulate with combinations that synergistically increase testosterone.

Ageless Male has no such synergy. No sophistication, either. It is a T-booster formula fail… but let’s check out its ingredients, just for the heck of it. (And for sheer entertainment value, click here to check out how Ageless Male fared vs. our best-rated T-booster)

Testofen is Ageless Male’s one redeeming factor. As a premium form of Fenugreek, Testofen is good for masculine health, especially sex drive.

As a T-booster, Testofen is less clear. It has helped with testosterone in research, but the one study was conducted by Testofen’s manufacturer… which hurts credibility a bit.

In that one clinical trial, Testofen 600 mg was found to “maintain” T levels.

Even though the dosage is weak and Fenugreek is not that great of a T-booster, it still may help some aspects of men’s sexual function. But look for it in a standalone supplement at a better dosage. Fenugreek 300 mg just doesn’t cut it.

Magnesium is an essential mineral and a solid T-booster. Most men need more of it, too.

The problem here is Ageless Male uses a cheap, hard-to-absorb form of magnesium (Aspartate) in a small dosage.

If you’re average weight, that translates into 880 mg Magnesium for Testosterone benefits.

Zinc is another good T-booster, our #2-ranked, in fact, found in 4 of our Best 5 T-Booster Supplements. but Ageless Male doesn’t give you enough.

Testosterone benefits are associated with 30 mg Zinc daily, so Ageless Male is giving you HALF what you need for T.

The Amino Acid Chelate form of Zinc they use is OK… not great, not the worst. So, at least they’ve got that going… right?

When B6 is low, T levels seem to decline. Ageless Male is giving you another good foundation nutrient for testosterone health, but again their dosage is low.

A bigger concern, the Pyridoxine HCl is a weaker form of B6—it’s hard to absorb and utilize, making the low dosage even smaller in its impact. Which is roughly none.

Ageless Male sexual function benefits are possible, due to their use of a standardized Fenugreek, which is legendary for male libido.

But Ageless Male for T? It’s a poorly designed formula for that purpose.

Nope. Ageless Male is not a legitimate T-booster formula. It might be good for libido, and that might give you the idea that it’s boosting your testosterone… But it’s just not.

Mostly men who want free stuff. That’s the problem. Men sign up for a free bottle of Ageless Male, and then BAM: They’re caught in an Autoship Scam that just keeps sending bottles and keeps charging the credit card on file. This can go on for months, cost hundreds, and take hours of phone calls to escape… all for a T-booster that doesn’t work anyway.

Ageless Male looks OK. It’s 4 ingredients only, nothing to confuse your body too much. The cheap, harder-to-absorb nutrient forms they use could cause stomach upset, but outside of that we see no major side effect concerns. One minor side effect: Fenugreek makes some people smell like maple syrup—especially their urine. Seriously.

Ageless Male gives T-boosters a bad name. They scam, manipulate and basically steal from their customers. Adding insult to injury, the Ageless Male formula is just not good! Ageless Male charges you more to bring you less: A “T-Booster” that doesn’t actually boost T.

Avoid Ageless Male. If you choose to ignore this advice and buy it anyway, be on high alert for credit card scammery and/or unauthorized charges to your bank account. These unethical practices may explain how New Vitality sold 2 million bottles of this inferior T-booster.