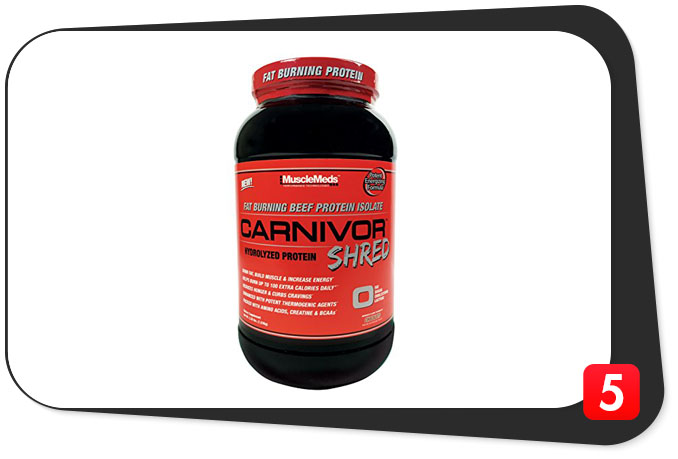 Raise your hand if you want to muscle up and lean out with a potent, fat-burning protein supplement.

To put it simply, it’s the fat-burning version of the former.

We knew all along we’d pump you up for this review.

MuscleMeds CARNIVOR SHRED “is the ultimate fat-burning and muscle-building solution” which helps you “experience the anabolic power of beef protein to build lean muscle mass while burning away unwanted excess body fat,” per its official website. Formula notes:

We’re sure you’ll agree with us when we say it’s unlike any other protein supplement we’ve ever reviewed.

It gives the sport of bodybuilding a unique new twist, doesn’t it?

However, we griped about its taste – its biggest chink to date.

Well, this made us wish the manufacturer came up with an advanced formulation with – hopefully – a better taste. 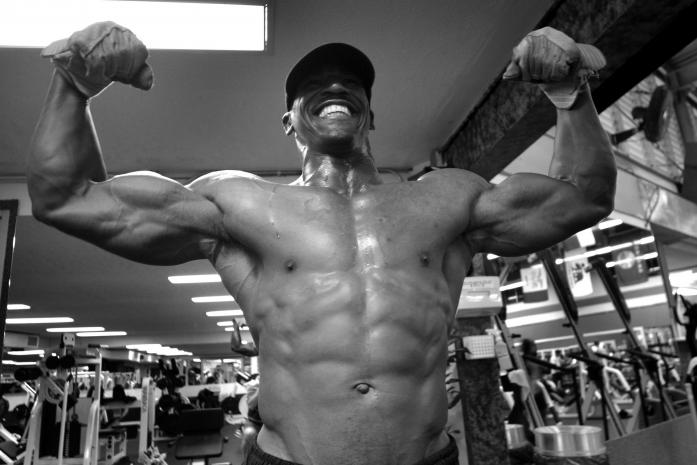 Want to muscle up and lean out at the same time? Try MuscleMeds CARNIVOR SHRED and see for yourself.

That was until its thermogenic counterpart came along.

Imagine this: a protein-packed, beef protein isolate and fat-burning supplement at your fingertips?

“You can now experience the anabolic power of beef protein to build lean muscle mass while burning away unwanted excess body fat,” per MuscleMeds’ official website.

If there is anybody who doesn’t want to muscle up and lean out at the same time, give us a buzz. Good luck on your search. We know it’ll be futile.

The manufacturer dubs MuscleMeds CARNIVOR SHRED as “the ultimate fat-burning and muscle-building solution,” per its official website.

This product also utilizes a Revolutionary BAT Activation Technology which helps “boost metabolism to burn up to 100 extra calories daily –  equal to the calories burned while running one mile,” per the company.

You can find these in MuscleMeds CARNIVOR SHRED’s Advanced Thermogenic Blend, which takes up 320 milligrams per 37-gram scoop.

Make no mistake about it – this is the product’s main selling point. This is what sets it apart from the rest of the field.

To simplify matters, it’s an herb and a relative of ginger. In terms of thermogenic properties, it helps activate brown adipose tissue (BAT), which, in turn, results in burning of fat.

Super-6 Paradol also activates UCP-1, which “increases the cells’ ability to grab white adipose tissue (WAT) and pour it into BAT to burn as heat,” per the manufacturer’s website.

The company also cites a study which reveals test subjects who supplemented with Super-6 Paradol burned an 100 extra calories over the course of 28 days.

We’ve yet to stumble upon a thermogenic protein powder which has this ingredient. That’s saying something, folks.

It seems Aframomum melegueta may also regulate blood pressure. According to The International Journal of Pharmacology (via SciAlert.net), “AM may have an antihypertensive and hypotensive effect by acting directly on the peripheral tissues such as the arterial smooth muscles and the cardiac muscle.”

Of course, no thermogenic blend would be complete without caffeine.

The manufacturer breaks down the benefits:

So, if you have no time to grab a cup of Joe before going to the gym, MuscleMeds CARNIVOR SHRED can provide you with a decent caffeine fix.

Hey, you might not need a pre-workout supplement anymore.

Here’s another reason why: the Advanced Thermogenic Energizing Blend also has yerba mate, a common fat-burning ingredient which is a natural caffeine source.

Plus, it has theophylline, “a methylxanthine found in cocoa that has been partially credited for the ‘feel good’ effect that comes from eating chocolate,” per the company’s website.

Check out its timeless benefits:

Now you know why green tea is a must, folks. Ditch those sodas and sugary drinks now.

Unfortunately, this product’s Advanced Thermogenic Energizing Blend is proprietary in nature – the manufacturer divulges the amount of the entire blend but doesn’t rattle off those for the individual ingredients.

The only fat-burning ingredient whose amount the manufacturer reveals is caffeine (175 milligrams per serving).

The other featured ingredient is 23 grams of beef protein isolate per serving.

Once again, the manufacturer claims this ingredient can help you increase strength and lean body mass.

The company cites a study from The International Society of Sports Nutrition (ISSN) conference in Austin, TX in 2015.

The result: test subjects gained an average of 7.7 lbs. of muscle mass and increased strength after they consumed beef protein isolate during an eight-week period.

Not only that, the company also claims its CARNIVOR Beef Protein Isolate has more amino acids than whey, soy, milk, and eggs.

Would you believe this ingredient also has 20 times more creatine than steak?

If you’re not familiar with creatine supplements, you’re missing half of your life.

Experts have done a ton of research on creatine. They deem it’s one of the safest and most effective supplements on the market.

On the other hand, it didn’t indicate how much creatine MuscleMeds CARNIVORE SHRED has.

Our hunch is it’s more or less the same as MuscleMeds CARNIVORE Beef Protein Isolate.

On that note, any time your protein supplement helps you burn fat and gives you the benefits of creatine, it’s worth a shot.

Nobody can argue with those.

Put together 23 grams of protein per serving, 20 times the amount of creatine that steak has, and enhanced BCAA levels, you get a recipe for muscle-building heaven, folks.

Throw in the thermogenic ingredients, and you are ready to muscle up and lean out like you never did before.

Here’s the best part, folks: MuscleMeds CARNIVORE SHRED, just like its predecessor, has no fats and cholesterol.

You may find that hard to believe, considering regular beef is a source of saturated fats.

Well, let’s give credit where it’s due.

MuscleMeds’ advanced hydrolysis process filters out the saturated fats and cholesterol and retains the protein and amino acids.

Long story short, folks: these ANRT factors help your body utilize its amino acid levels to the fullest and prevent their wasting for maximum muscle growth.

Speaking of which, MuscleMeds CARNIVOR SHRED has an estimated eight grams of maltodextrin per serving as well.

This is a fast-absorbing polysaccharide (complex carbohydrate) which helps increase energy and muscle growth.

Icing on the cake, folks.

Our take: MuscleMeds CARNIVOR SHRED has the potential to be one of the top thermogenic protein supplements on the market.

We believe its features (thermogenic ingredients, creatine content, BAT Activation Technology, and ANRT factors) set it apart from the rest of the field.

That’s it. Simple as that.

Listen, a lot of customer have been raving about this product’s thermogenic properties. After all, can you think of another beef protein isolate supplement which helps torch fat?

They swear by it. So do we.

The Advanced Thermogenic Energizing Blend has proven ingredients in caffeine, green tea, and yerba mate. Throw in Super-6-Paradol into the mix, and you get impressive results.

We tip our hat off to the manufacturer for going the extra mile. We love its Revolutionary BAT Activation Technology and Anabolic Nitrogen Retention Technology.

These will help you muscle up and lean out like never before. Believe it.

Once again, we love MuscleMeds’ awesome hydrolyzed beef protein isolate – you get a solid 23 grams of fat- and cholesterol-free muscle-building protein per scoop.

We’re sure not too many protein supplement manufacturers can say that.

Don’t forget about the additional creatine monohydrate (the most effective of its kind on the market), branched-chain amino acids (BCAAs), and maltodextrin for a more anabolic environment.

We said it before, we’ll say it again: we’re confident you can reap the same benefits as the test subjects the manufacturer mentioned.

If you do your part by exercising regularly, eating right, getting enough rest, and supplementing with MuscleMeds CARNIVOR SHRED, expect to increase muscle mass, strength, performance, and endurance.

On the other hand, one of the main differences between MuscleMeds CARNIVOR SHRED and MuscleMeds Beef Protein Isolate is transparency.

While the latter divulges all of the ingredient amounts, the former has a proprietary blend (its Advanced Thermogenic Energyzing Blend).

Like we said, the company reveals just the caffeine content (175 milligrams per scoop). It doesn’t do the same for caffeine, green tea, yerba mate, and Super-6-Paradol.

The sodium content is also somewhat high at 13 percent of the daily value. If you’re monitoring your sodium intake, best to steer clear.

Just like its predecessor, MuscleMeds CARNIVOR SHRED has sucralose (a.k.a. Splenda), an artificial sweetener which has several side effects.

Since the manufacturer came out with an advanced formula, it should have replaced this with stevia (a natural plant-based sweetener which helps regulate blood pressure and blood sugar levels) instead.

Finally, some customers continue to gripe about this product’s taste and solubility – the same complaints they had about MuscleMeds CARNIVOR Beef Protein Isolate.

Honestly, the taste is the biggest chink in this supplement’s armor.

The manufacturer could have avoided this had it done its homework. It’s as simple as that.

MuscleMeds CARNIVOR SHRED has the following benefits, per its official website:

We agree with all of these claims. If you’re looking for a potent fat-burning protein powder, MuscleMeds CARNIVOR SHRED should be on your shortlist.

MuscleMeds CARNIVOR SHRED “is the perfect fat-burning protein for athletes who are trying to get ripped” and for those “who are trying to build muscle” and “minimize fat gain,” per its official website.

MuscleMeds CARNIVOR SHRED has 13 percent of the daily value for sodium, which may not be suitable for those who are monitoring their intake.

In addition, this product also has sucralose (a.k.a. Splenda), an artificial sweetener which has several side effects.

If these, or any other ingredient, make you feel doubtful, please do not hesitate to consult your doctor before purchasing.

It’s like you added some thermogenic ingredients to the latter. That’s it.

We were hoping the manufacturer ironed out the kinks of the predecessor (taste, somewhat high sodium content, Sucralose, etc.), but it didn’t.

Hey, this product is still decent. We recommend it.

Maybe we will when the manufacturer does its homework.