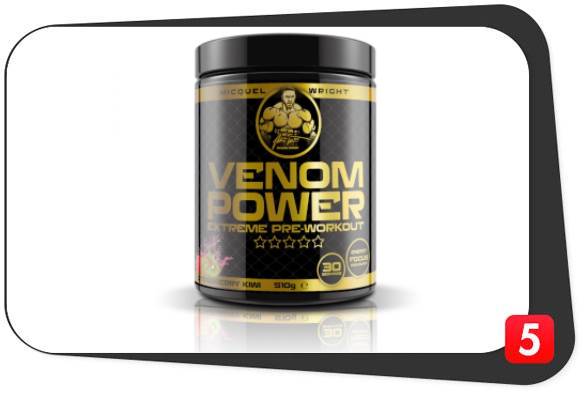 A pre-workout can make or break a session. The right one elevates your energy levels, making you feel like you can lift a house. The wrong one leaves you over-jittery, flushed and anxious, or it has no effect at all.

The formula behind Venom Power Pre-workout is geared to stimulate your body and mind, so that you enter every session prepared to work. However, by disguising its ingredient list behind a proprietary blend, its difficult to discern efficacy. But as it’s designed by a seasoned, professional bodybuilder, it has to have some legs, right?

Let’s dive into the details behind Venom Power Pre-workout below.

Venom Power Pre-workout contains a proprietary blend of ingredients designed to elevate your efforts in the gym. Designed by elite bodybuilder Micquel Wright, it joins the long list of pre-workouts both made and used by strong, experienced lifters.

His company also sells training programs and gym equipment. Yet Venom Power Pre-workout is his novel foray in to the supplement industry.

Unfortunately, as this secret recipe is a proprietary blend, we don’t get a look at exact amounts. However, we do know these ingredients are featured in Venom Power Pre-workout:

Arginine alpha-ketoglutarate, or AAKG for short, is a common pre-workout supplement in bodybuilding. Arginine is used to raise production of nitric oxide, a powerful vasodilator. Adding alpha-ketoglutarate as a salt is intended to increase absorption, as arginine is known for its poor bioavailability. One study, however, found that seven days of AAKG supplementation showed no difference in blood flow, blood pressure, or heart rate when compared to placebo.

Known as a powerful pH buffer, beta alanine works to shuttle lactic acid away from your muscles. This allows a muscle to work harder for longer before reaching an anaerobic threshold. Unfortunately, in beta alanine’s case, research shows that it requires a loading phase to reach critical amounts. It’s lack of fast-acting effects (plus the fact that we can’t see how much is in this pre-workout) render it null and void.

Side note: it can also cause unwanted tingling in high doses. So it’s something to consider when you don’t know how much you’re getting in a product.

As a compliment to AAKG, citrulline actually transforms into arginine in the kidneys. Therefore, instead of worrying about low absorption stunting efficacy, you can stimulate arginine production from within. It’s a potent way to raise nitric oxide and increase blood flow, and it also helps with protein synthesis pre-workout.

The cornerstone of any good pre-workout, creatine supplies your phosphagen system with nutrients. Research has shown that supplementing with creatine before a workout increases muscle mass and strength. It not only adds energy, but it stimulates IGF-1 and facilitates recovery.

Taurine is an amino acid found all over pre-workouts. While, by itself, is mostly an antioxidant, adding taurine to a pre-workout can help even out the effects of stimulants. It’s not going to revolutionize your workout on its own, but it can keep you from getting over amped.

When dose-appropriate, however, caffeine is one of the best, most simple pre-workout supplements out there. Countless amounts of research have been conduction on caffeine and athletic performance. Just see sources here, here, and here. Somewhere between 3-6 mg/kg of bodyweight is best for power and endurance output.

Hailing from an Amazonian plant, guarana acts as a stimulant when consumed pre-workout. Much like the coffee plant, guarana seeds contain caffeine, so it’s addition brings a double-whammy. Theobromine and theophylline also come from the plant – two other stimulants. Combined, the three speed up your nervous system, making you more alert and responsive to stimuli. If you’re an athlete, though – beware. Guarana is a banned substance according to the NCAA.

This is just a long name for a walnut fruit. No, you pre-workout isn’t dotted with little nuts. Rather, this ingredient is extracted from the entire fruit, not just the nut portion. It’s a natural source of DMHA with a slightly altered molecular structure. Since synthetic DMHA has been banned due to dangerous side effects, this is basically a way around it.

Norvaline is an isomer of valine, one of the three branched-chain amino acids. Therefore, it theoretically offers similar benefits – reduced protein breakdown, accelerated protein synthesis, and nitric oxide stimulation. However, recent evidence suggests that norvaline might be toxic to the brain. Human studies have shown that norvaline may damage brain cells and trigger neurodegenerative disease.

Niacin, or vitamin B3, opens up blood vessels to help you chase “the pump”. Niacin notoriously also causes a flush – where your skin gets red and starts to tingle. It can be an uncomfortable distraction when you’re under heavy weight, but some people like it. Only you know your experience with niacin. But, again, it’s tough to decide without full supplement facts.

While phosphatidylserine can feed your brain cells, it’s not exactly fast-acting physical pre-workout. What it can do, however, is reduce the negative effects of a stress-inducing workout. Research has shown that chronic phosphatidylserine supplementation can suppress cortisol levels post-exercise. Yet that’s not a strong case for taking in your pre-workout. You could literally take it at any point during the day, as long as you are consistent.

Choline bitartrate is a type of cholinergic that features a salt. When broken down, it provides materials to build acetylcholine, an important neurotransmitter for muscle contraction. The harder you work, the more motor units you’re recruiting, and the more acetylcholine you need.

Unfortunately, experts say that choline bitartrate is the cheap version, and it doesn’t do much for the acetylcholine levels in your brain.

Dimethylaminoethanol (DMAE) promises focus, elevated energy, and improved mood. Not to be confused with DMAA, which is basically an amphetamine, DMAE is another cholinergic compound. It’s naturally found in the human brain, and helps create acetylcholine. All of the research on DMAE’s benefits for your workout, however, are inconclusive. So while it might increase acetylcholine somewhere in your body, it hasn’t been proven as a pre-workout.

As one of the natural ingredients in Venom Power, maca root might just be their best addition. Maca is an adaptogen, which means it helps protect your adrenal glands from fatigue. But reacting positively to stress, you can work hard day-in and day-out. It’s also an antioxidant, which clears up damaging free radicals created by exercise. Similar to caffeine, it’s a great plant-based energy boost that works with your body instead of against it. 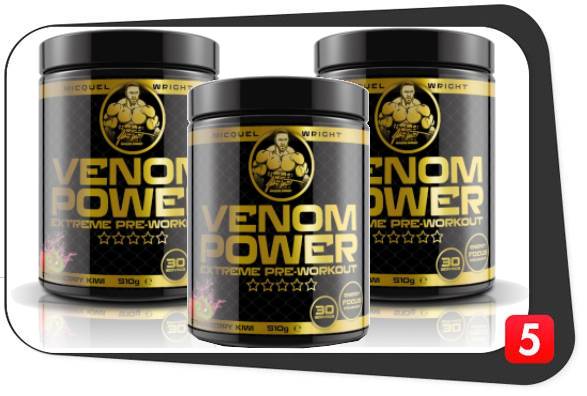 It’s hard to analyze the exact formula, as “proprietary blend” means we don’t have access to exact amounts. However, the simple variety of stimulants suggests that Venom Power Pre-workout packs a punch… that might knock you out.

Most of the ingredients have dangerous side effects with too high of a dose. Clinical investigation suggests a mg/kg maximum for stimulants.  Even caffeine has a toxic dose. According to the FDA, just 400mg per day of caffeine approaches the limit.

Now, everybody is different, and we all have different thresholds. I, for one, probably consume close to that limit of caffeine daily without issue. But combining that with DMAE, guarana, juglans extract, and vasodilators brings pause.

Venom Power Pre-workout has too many unnecessary stimulants, not to mention a lack of transparency about the amount per serving.

Venom Power Pre-workout will absolutely wake you up. It’ll get your blood pumping and get your mind right. With at least four vasodilators and five stimulants, it’s a concoction designed to do what it promises – give you that “kick” of intense energy.

The inclusion of maca root, caffeine, and citrulline prove there’s some method to the madness. These three, combined with creatine and beta alanine, are all backed by a long line of research. Similarly, adding taurine and phosphatidylserine shows some concern for reigning in overstimulation. Unfortunately, we don’t know the ratio of one ingredient to another, so it might all be negligible.

It’s safe to say Micquel Wright takes it, or he probably wouldn’t be marketing it. Only a small percentage of elite bodybuilders are of his calibre, however, and they’ve built up a tolerance to supplements and performance enhancing stimulants for years.

Also, they’re massive – 3000mg of something will affect a 100kg man of solid muscle very differently than a 60kg woman (or man) just getting in to lifting.

Known side effects of individual ingredients include:

Venom Power Pre-workout contains some questionable ingredients as far as safety goes, but it’s likely effective as a stimulant. For bodybuilders who have almost built an immunity to “normal” pre-workouts, this one might kick it up a notch.

At £29.99 per container, it’s not a bad price point. Each container includes 510 g of powder, and one scoop is 17 g, so you get 30 workouts worth per purchase. Labels on the packaging warn against taking more than 2 scoops in 24 hours, so you really shouldn’t need any more each month.

Any pre-workout with a warning to avoid excess daily amounts should be taken with caution. We’re not a huge fan of all of the stimulants, nor the lack of transparency about ingredients. That usually means one of two things: there isn’t enough of something to be effective, or it contains too much to be considered safe. While it might look cool to use the same thing as an elite bodybuilder, it’s not worth risking your health. Plus, there are more effective pre-workout supplements on the market.

Our advice: steer clear of this one unless you have years of experience responding very well to its ingredients. Even then, take with caution.