You are here: Home / Pre-Workout / Sweat Ethic FYRE’D UP Review 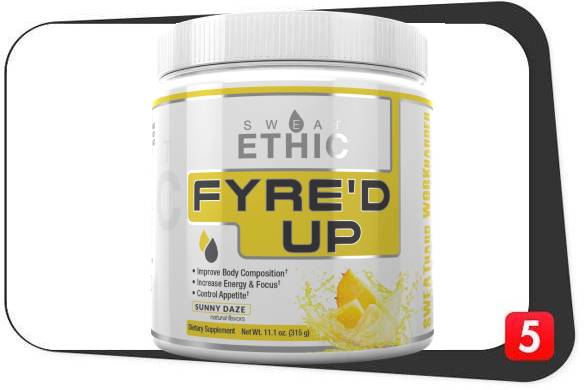 While there’s no magic weight loss pill, fat burners can help accelerate the process. Most results come from diet, exercise, and lifestyle management.

However, assuming you have all of those in line, a good fat burner can promote lipolysis. Some utilize thermogenesis, others rely on fat mobilization, and others focus on workout performance. Sweat Ethic Fyred Up meets somewhere in the intersection.

About Sweat Ethic FYRE’D UP

Sweat Ethic Fyred Up states its claims right on the label – improved body composition, increased energy and focus, and appetite control. Their three primary flavors, tropical sunshine, sunny daze, and strawberry sunrise, shows a slight bias for the sun. Which is fair, as the product is a caffeinated weight loss powder.

What’s more energizing and sweat-inducing than a hot, sunny day? While they’ve sure got the branding right, let’s dig in a little to see if the ingredients follow.

The ingredients featured in Sweat Ethic Fyred Up include: 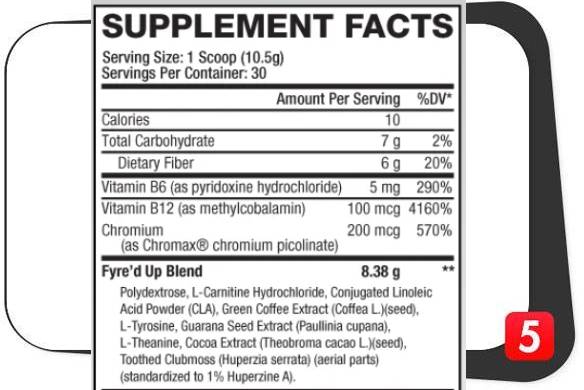 Already we’ve reached an issue – proprietary blends. While it’s great to know ingredients, you need amounts for full transparency. They could have added one iota of tyrosine, for all we know.

Regardless, we’ll go over each ingredient in detail.

Vitamin B12 plays a vital role in nervous system health, homocysteine regulation,  and red blood cell count. Deficiencies result in anemia, paraesthesia, and other neurological symptoms. For fat loss, however, vitamin B12 is touted as a metabolic regulator. Alongside B6, it acts as a coenzyme in energy metabolism.

However, unless you’re deficient, research is limited on supplemental B12’s effects on fat loss. If you suspect an issue, it’s better to get your blood tested than throw the kitchen sink at fat loss

Chromium picolinate is commonly used as a weight loss supplement, cited for its ability to change body fat composition. However, even the company Chromax, the included form of chromium, states that it might take three weeks to see any clinical effects. Theoretically, it works by transporting glucose for blood sugar regulation.

Polydextrose slowly ferments and continues to be a carbon source for bacteria all the way through your intestines. By improving your gut health, you can improve digestion and nutrient metabolism. Moreover, according to a meta-analysis in the Journal Nutrients, polydextrose decreases appetite. By reducing the desire to eat, polydextrose supplementation could help weight loss when combined with exercise.

Carnitine, a non-essential amino acid, is created within the body from methionine and lysine. Once formed, it helps transport fatty acids inside the mitochondria. Thus, it makes these powerhouses better at their job – metabolism.

Plus, like everything else in the proprietary blend, it’s impossible to tell if Fyred Up contains enough carnitine to do anything at all.

Conjugated linoleic acid (CLA) is an omega-6 polyunsaturated fat created naturally during animal digestion. Therefore, it’s found in all types of meat products. Although most diets warn against omega-6 fats, as long as you balance it well with omega-3’s, you can limit most health issues. Unlike other omega-6 fatty acids, CLA actually contains anti-inflammatory properties.

While a few studies suggest decreased body fat mass with 3-4 grams of CLA per day, clinical evidence is sparse. Thus, CLA’s effects on body fat are inconclusive. Even if there was strong evidence, we can’t say how much CLA comes in Sweat Ethic Fyred Up.

Obviously, as a coffee extract, this ingredient features caffeine. Research confirms that caffeine can accelerate weight loss through thermogenesis and fat oxidation. chlorogenic acids found in green (read: not roasted) coffee help mediate glucose and lipid metabolism. Of course, it comes with the traditional antioxidant benefits of most polyphenols as well.

Unfortunately, green coffee extracts have come under fire for false claims about weight loss benefits. More research and clinical use is definitely warranted.

Well, it’s not that straightforward – tyrosine helps create dopamine, and dopamine creates epinephrine. Theoretically, with more dopamine, you could create more epinephrine (adrenaline), but it doesn’t always have a direct effect. The effects of adrenaline die down within a few minutes, as the hormone is meant to help us get away from danger.

Hailing from an Amazonian plant, guarana seed extract provides a natural form of caffeine. This powerful plant is actually twice as potent as coffee. Not only does it contain more caffeine, it also features additional stimulants – theophylline and theobromine. These two work in tandem to lower fatigue, open up the airways, and drop blood pressure. As a result, you get increased oxygen to the brain, organs, and muscle tissue for a sort of natural high.

Guarana’s purpose as stimulant is evidenced by inclusion in multiple energy drinks. However, it doesn’t directly cause fat loss. What it can do instead is increase energy for better workouts.

Huperzine A, a compound found in Toothed Clubmoss, has been used in Eastern medicine long before the supplement craze. It’s known to elevate levels of acetylcholine, an important neurotransmitter found between nerve synapses. Activation of acetylcholine triggers muscle contraction, so it helps us move during exercise.

Evidence on Clubmoss for fat loss, however, runs sparse. With more exercise, you could theoretically lose weight. But there’s a lot of other confounding variables that go in to it. Simply taking Clubmoss and hoping for the best won’t cut it. 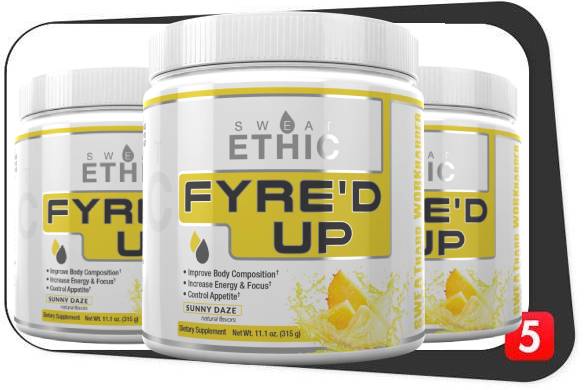 Sweat Ethic Fyred Up contains a few ingredients that could work – caffeine, B vitamins, and prebiotics. Carnitine has mixed reviews, and tyrosine works better as a nootropic. Regardless, with the exception of B vitamins, Sweat Ethic hides their ingredient content. Why not be up front, if you’re proud of how well your product work?

Proprietary blends are a big red flag in the supplement world. Without the external governance of bodies like the FDA, supplement brands are free to lead consumers astray. It sounds good to include some of these ingredients on the label, but it’s unlikely they work.

We can’t say for sure, but we’d like to see transparency from Sweat Ethic to form a real conclusion.

Consumers of Sweat Ethic products include goal-oriented exercisers looking to get a nutritional edge. As a relatively new supplement line, Sweat Ethic previously specialized in athletic wear. It looks like it’s geared toward the relatively fit, which makes a bit of sense.

As most of its ingredients help circulation and energy, Fyred Up could theoretically help you train harder on low energy. Training hard could of course result in fat loss. But then again, so could training hard without this supplement. There’s a large difference between correlation and causation.

The benefits of taking Sweat Ethic Fyred Up include:

The following side effects could result from taking Sweat Ethic Fyred Up:

You can grab Sweat Ethic Fyred Up in any of the three flavors for just $39.99.

Sweat Ethic Fyred Up might sound good, but it’s very unclear whether it works. If you’re looking for a fat loss supplement, find one with years of evidence and a clear concern for transparency.